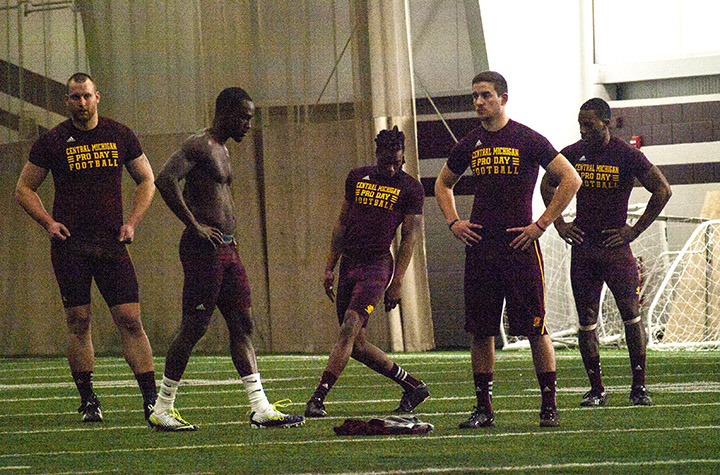 Running back Zurlon Tipton impressed scouts at his pro day. Injuries have plagued his career at Central Michigan, but now he is fully healthy and ready to show what he can bring to NFL teams.

“I would say it was a good day,” Tipton said. “I came out, ran some good times and impressed a lot of people. I was mostly trying to have fun for the last time with my boys. At the same time, I wanted to show the scouts what I could do.”

A solid 40-yard dash time can improve any player’s draft stock. Tipton ran a 4.69 40-yard dash and seemed satisfied with the results. But he was more concerned about how his surgically repaired ankle responded.

“Just getting out there running was the most important thing,” said Tipton. “Where I trained at, we didn’t have a full day of training with running or drills like that. I just liked the way I was running and doing the drills with the breaks and cuts. My ankle responded really well.”

Who knows if Tipton will be selected in this year’s NFL draft. Either way he can draw inspiration from a former Central Michigan player like Jahleel Addae, who went undrafted and is now the starting safety for the San Diego Chargers.

“We know we come from a smaller school,” Tipton said. “Personally, I like being the underdog in situations. I come from a small high school and a small college. I don’t care about that. I know what I can do and I know I belong.”

Offensive lineman Jake Olson showcased his talents as well on Wednesday. Like Tipton, he has been injured throughout his CMU career, and did not participate in the bench press because of a broken wrist he suffered in the second game of the 2013 season.

“I have the size and strength,” Olson said. “Now I just have to prove that I can stay healthy and I should be able to hopefully make it.”

With all the injuries Olson has dealt with shows his willingness to determination to get back out on the field and show everyone what he is able to accomplish.

“It was frustrating, but I just kept pushing, it built a lot of character,” Olson said. “A lot of people would have given up after their second or third surgery and now I’m still here today trying to go for it.”