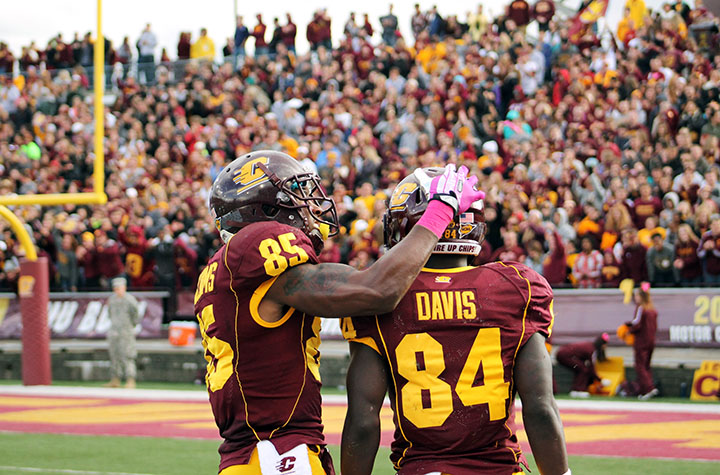 Central Michigan’s defense played an inspired first half against No. 23 Northern Illinois, but Huskies’ quarterback Jordan Lynch, who set an FBS record for rushing yards by a QB with 316 yards, wore the Chippewas down in the second half.

Central Michigan’s offense was in rhythm during the first half but couldn’t move the ball as well after halftime, putting more pressure on the defense.

“In the second half, our offense didn’t possess the ball enough and kept putting our defense out there. They did a good job up front, they’re very physical,” Chippewas coach Dan Enos said.

Lynch’s 232 yards rushing and two touchdowns in the second half, broke open a game that was neck and neck for the majority of the contest. Timely first half turnovers by Central’s defense, as well as an explosive first quarter from Cooper Rush and the Chippewas’ passing game, resulted in a 14-14 score at halftime. But Northern Illinois scored 24 points to Central Michigan’s three in the second half to remain unbeaten and walk away with its seventh victory of the season.

“I thought we hung in there for a half. We were down one possession in the fourth quarter and then they imposed their will on us and I thought they really established themselves on both sides, offensively and defensively,” Enos said. “We couldn’t get back into it but they’re a really good football team and they did a great job today.”

With the loss, Central falls to 3-5 overall and 2-2 in the MAC. The Chippewas have to win at least six games to qualify for a bowl berth.

The Chippewas won’t play again until they travel to Muncie, Ind. to play Ball State on Nov. 6.