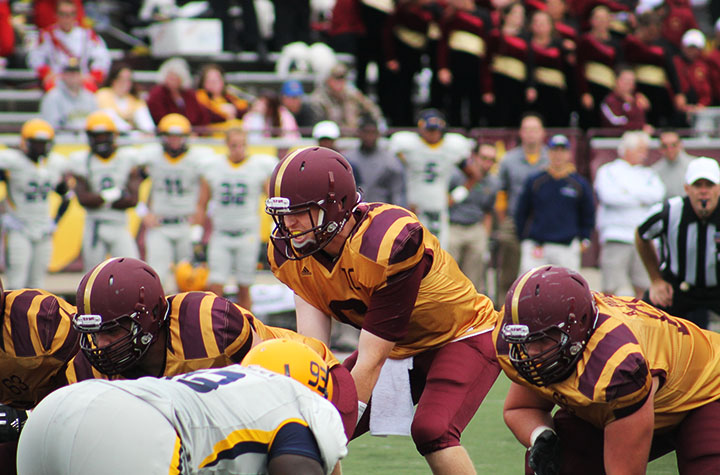 Central Michigan is entering a crucial turning point in its season on Saturday against North Carolina State University (2-1) of the Atlantic Coast Conference.

After dropping to 1-3 against Toledo on Sept. 21, Central embarks on a potentially season deciding three-game road trip.

There is one key thing that Central can do to turn its season around: Stop turning the ball over at such a high rate.

Yes, starting quarterback Cooper Rush is a freshman and he is going to make “freshman mistakes,” as head coach Dan Enos said after the 38-17 loss to Toledo. This doesn’t give you a free pass to play sloppy ball for the rest of the season, especially with a capable backup in Alex Niznak.

Against Toledo, Central committed four turnovers, including two interceptions from Rush. Entering the fourth quarter Central was only down seven, 24-17. After driving into the red zone, Central lost a fumble and Toledo put the game away with a 74-yard drive leading to a touchdown.

Saylor Lavallii had a career day in the loss and Central will need more of the same to hang with NC State. Lavallii ran for 144 yards rushing on 24 carries and scored a touchdown.

With the running game starting to pick up pace, the excuses are beginning to dwindle for the passing game. Central did everything that they needed to do to beat Toledo — won the possession time and ran the ball effectively.

It comes down to one thing, for both NC State and Central Michigan: Turnovers.

NC State lost to No. 3 ranked Clemson 26-14 on Sept. 21, behind two turnovers, nine penalties and about as controversial of a call that you can get. Clemson was up 13-7 in third quarter when NC State wide receiver Bryan Underwood appeared to give NC State the lead on a 83-yard touchdown run.

The officials ruled that Underwood stepped out of bounds and ruled the play dead — deeming it unchallengeable. Two minutes and a fumble later, Clemson was up 20-7. Central Michigan is going to have a hard enough time bridging the talent gap against NC State, so protecting the ball should be of the utmost importance.

Play to your strengths — run the ball.

Rush is a freshman; this is old news. Make his job easier by giving the ball to Lavallii and Anthony Garland as mush as humanly possible. This will open the field up and get home-run threat Titus Davis more chances to break away from the wolfpack defense.

This offense is not built to rely on one player, so do everyone a favor and spread out the responsibility.