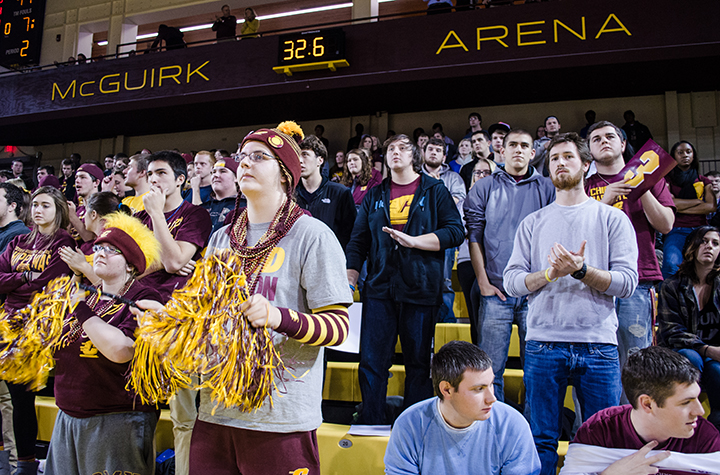 These three words were echoed by fans in McGuirk Arena as Central Michigan went on to win the “Central Michigan Tournament” title win over three home games, which wrapped up on Saturday, Nov. 23 against Cal State Northridge.

Freshman Nick Gembarski said he likes to support Central by going to every game he can. Gembarski enjoys participating in all of the student cheers and tends to get loud and rowdy.

“It fires up the players,” Gembarski said. “It really motivates them and it’s good for the school.”

Gembarski said what makes Central fans the best fans in the Mid-American Conference is the energy they bring to the arena and the team.

“We’re loud and obnoxious and make sure these Chippewas know we came here to support,” Gembarski said. “We do everything we can to let it be known that we are the best by far.”

Senior Ashley Gordon comes out to the games due to her love of basketball and her school. She also enjoys coming out to cheer on her favorite player, sophomore forward John Simons.

“It’s nice to come out and see him play,” Gordon said. “I’m friends with him outside of basketball and I like to come and support him. It’s cool when the student body can come together to support the school and represent Central Michigan.”

Coach Keno Davis said the team feeds off the crowd. The program wanted to give students more opportunities to come out and support the team, so it added more home games this season. Davis said last year some games lacked big crowds and energy.

Throughout the tournament fans made their presence known by waving large cardboard cutouts with the faces of Elmo, Dwight from The Office, and Coach Davis. Some even dressed up as Spider-man, Superman, and Uncle Sam, to name a few.

“I wish I could see it more,” Davis said. “I hear about it from my wife and my friends about the big heads and things like that. Every once in a while, I’ll look up at the scoreboard and see what the score is and I might catch a glimpse of what’s going on.

“Our students are getting pretty creative in what they’ve done this year and it helps our guys.”

Freshman Shannon Brandon said she enjoys coming out to the games and cheering on the Chippewas. She shows off her school spirit by wearing Central Michigan’s colors.

“I get everything at the campus bookstore,” Brandon said. “You just got to come out and support your team with maroon and gold.”

Sophomore guard Chris Fowler said every time the team steps out on the court representing Central Michigan University, they want to give the students and fans a good show.

“To see them come out to the game and support us like they have, has been great and has given us a lot of energy,” Fowler said.

Junior Mackenzie Guest decided to come out to McGuirk with her roommates for her first Central Michigan basketball game during the three-day tournament.

“It’s more exciting than you would expect it to be because I feel like I don’t hear a lot of people talking about the basketball team too often,” Guest said. “But once you get here you’re like ‘Oh wow, the crowd is really pumped up.’”

Coming out to support the team is nothing new for senior Ashley Push, who has been coming to games for a while now. Push said there are a lot of young players on the team who seem to be working well together this season. Push said she enjoys rooting for the team, providing them with energy.

“Cheering when they get big baskets and stuff is always a good way,” Push said. “Just standing up for them for the fight song and just getting them pumped up to play well.”

Davis said he wants to continue to improve the experience of coming out to the games for students because then McGuirk will be even a tougher place to play at.

Central Michigan fans continue to distract visiting teams by making distracting noises, shouting out annoying chants and will be the first ones to yell at a player of the opposite team or at an official when a bad call is made.

Central Michigan ended its host tournament by winning two of the three games.