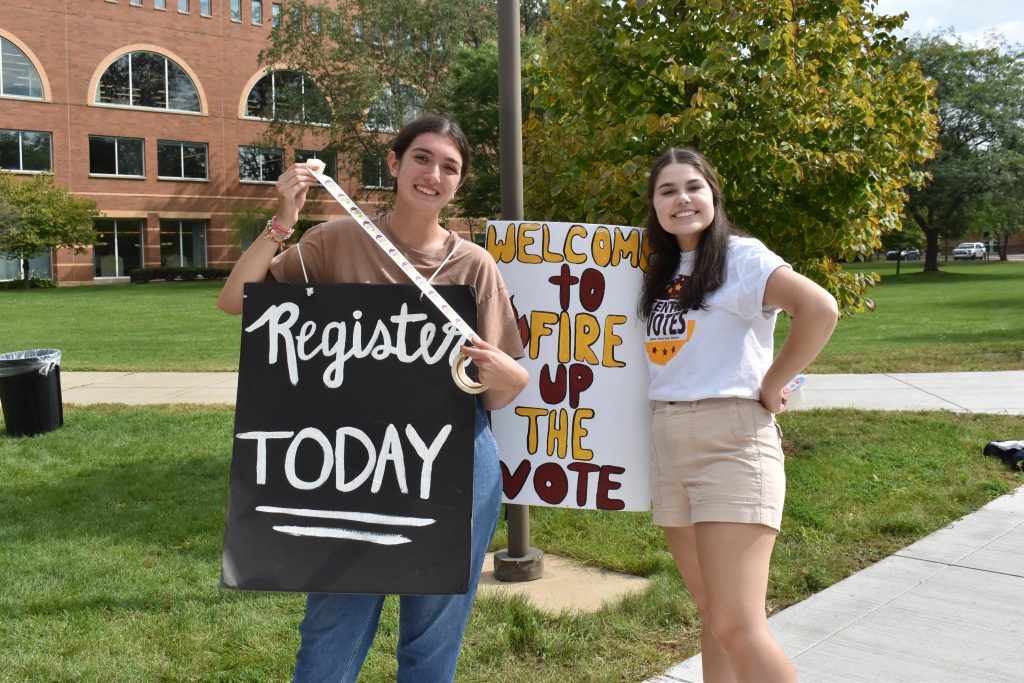 Story and photos by Maddie Lajewski

With the midterm elections quickly approaching this November, Central Votes was on the lawn of Park Library on Tuesday, Sept. 20 helping CMU students register to vote and apply for absentee ballots.

“Central Votes is a registered student organization here on campus that’s really dedicated to improving civic engagement and getting more CMU students to vote,” said President Katie Ellison. “We meet every Tuesday from 8-9 p.m. in Anspach 256. We’re really just dedicated to making sure we fire up the vote.”

Ellison is a senior yet only recently joined Central Votes last year.

Central Votes didn’t pick a random Tuesday to host this event. Fire Up the Vote is always held on or during the same week as National Voter Registration Day.

“So Sep. 20 is Fire Up the Vote day,” Ellison said. “This is our National Voter Registration Day, so this is a civic holiday that is celebrated all across the country every year. I believe this is the tenth year of National Voter Registration Day. For the past couple of years we’ve been doing Fire Up the Vote day. It’s just a voter drive to get more students registered to vote. But our installed data tells us that 89% of our students were registered to vote in the last election. So we’re really focusing more on not just getting students registered to vote, but how do we make sure that they actually show up to the polls on Election Day. We’re talking about absentee ballot applications today as well.”

The Fire Up the Vote event not only helped students register to vote and apply for absentee ballots, but also included a variety of different activities for students to participate in.

“We have a lot of stuff at this event,” Ellison said. “We have some information and volunteers from the League of Women Voters, we have a couple different prize games, spin the wheel, play Plinko, answer questions to win candy and stickers. We have goats, that’s the most exciting part. That’s the real attractor is we have goats. We thought that would be a really great way to catch students’ eye, and get them to stop and talk to us. We’ve done a play on the ‘greatest of all time’, voting makes you the GOAT or GOATs vote. The Office of Student Activities has squirrels, so we might be Central Votes is the GOAT.”

Ellison is passionate about voting and people registering to vote.

“Voting is so important to me because I think it’s important for everyone to participate,” Ellison said. “I understand that maybe my vote won’t make the biggest difference, but it’s a way for me to make my voice heard. It’s a way for me to improve our democracy. If everyone else pitches in, it’s really a community building effort, and it also makes sure that our representatives are doing what we want them to do and that our democracy is working for us.”

Ellison shared that students and young people hold the largest chunk of the United States population, yet they are the least likely to vote on Election Day.

“That’s the whole point of voting civic engagement,” Ellison said. “The fact that students and young people are the biggest chunk of our voting age population, yet students are the smallest amount of people who actually show up to vote. So to me, it’s really important that we’re such a huge chunk of the population and yet we’re not making our voices heard because that means that something is wrong. There’s a disconnect and we’re not being represented in a way that we should be because we are the democratic experiment. We should be making our voices heard and our politicians should be working for us no matter how we’re voting, as long as you’re speaking your truth by voting.”