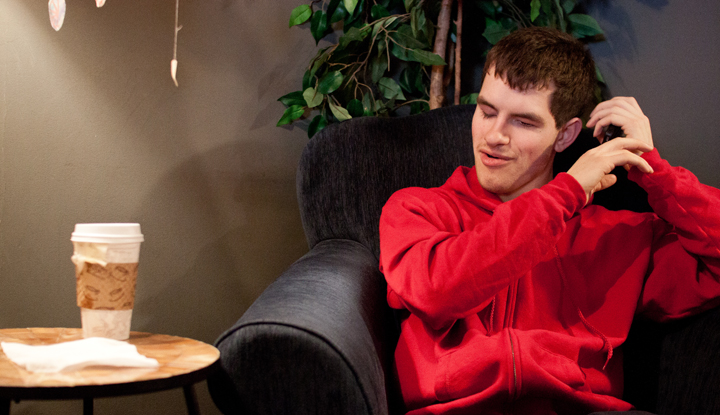 I have glaucoma, as well as microphthalmia, which is the medical term for small eyes. My left eye is smaller than my right. It looks really creepy, or so I’ve been told by close friends. Quite frankly, I don’t give a shit.

For all intents and purposes, though, I’m a normal college student.

I go to class, smile and laugh, and have friends. I’m involved on campus; I’m a writer; I’m an avid reader. I love music and movies, occasionally smoke hookah, drink coffee and soft drinks. I hang out with girls and yes, I even cross Mission Street at various points around town.

Hey, you do what you have to do to get around. I also save 100 percent on car insurance, but that’s for another time.

I have recently become more and more passionate about changing the face and perceptions people have regarding not only blindness, but disabilities in a broader context.

A week before Christmas, I had the incredible opportunity to speak to five different classes of eighth graders of a former English teacher in my hometown’s school district.

It was a tremendous opportunity for me to completely alter the perceptions of young people on their understanding of blindness and disabilities in general, and to chip away at the negative connotations society often associates with the word “disability.”

One of the most important points I stressed was that there’s nothing wrong with asking questions, and more people need to be open for discussion, both as a bystander and as someone experiencing a disability firsthand.

I’m extremely open and honest about my blindness. This allows me to remain totally transparent in my dialogue with kids.

I presented to only around 150 kids. However, that’s 150 students who now have a completely different view on blindness and disabilities.

People have a very negative view of people with disabilities, and Hollywood is partly to blame for this. I can’t count the number of times I’ve been seriously asked if I’m like Daredevil, the blind superhero played by Ben Affleck in the 2003 film.

It’s true that blind people use their other senses and lack of sight to their advantage, but we don’t have supersonic hearing or sonar abilities.

In the Family Guy episode “Blind Ambition,” Peter is feeling insignificant compared to the various achievements of his friends. He tries to set a world record by eating the most nickels, but he instead develops nickel poisoning and is blinded.

Later on, Peter is returning from the bathroom and feels his way back to his room, but instead enters his son’s room and gets into bed with him. Peter starts talking to him, thinking he’s Lois, his wife.

There are a number of things inaccurate about that scene. The blind people I know, including myself, don’t have to feel their way around their house or other living space. You remember the layout.

Next, this scene implies blind people are stupid. You would know pretty quickly whether you’re getting into bed with your wife, or with your teenage son.

Scenes and misconceptions such as these perpetuate the stereotypes plaguing those experiencing a disability.

I want to continue giving talks on disabilities to people of all walks of life. I know I am simply one person, and that one person cannot do it alone, but I will absolutely do my part in order to help make society a better, just, and more equal place for those with disabilities.

People on both sides — those with a disability and those without — need not feel afraid to speak up. People with disabilities should not get offended or pissed off with someone who asks a question.

I would much rather educate someone than have them continue about their business, wondering, perhaps knowing the answer to their questions, but perhaps not.

We need to be more open with our friends, families, coworkers, educators, and complete strangers. There is absolutely no shame in asking someone how they do something, or about what they are going through.

It’s pathetic that people who don’t have a functioning body part or might not be able to hear or see as well are treated any less than somebody else.

I for one do not think so.