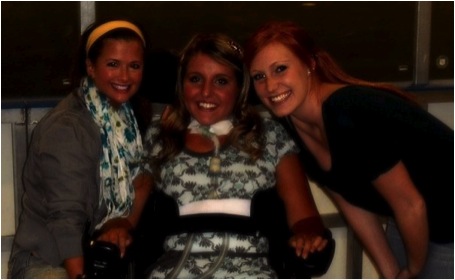 Between the confused look on the face of children, the whispers of strangers and the overly enthusiastic politeness from many who meet her, Laura makes her way through one of her favorite restaurants, Bahama Breeze. She is used to all this by now. Instead of being bothered by the uneasiness of it all, she just smiles and greets everyone with a hello.

Yes, she is a female. Yes, she is attractive. But those are not the reasons she receives this treatment. These reactions are because she is quadriplegic, living and breathing through a ventilator. Once she reaches the table and her wheelchair is unloaded she begins to recap the past eight years of her life. There’s no fear or hesitation when she opens up though. She just tells her story.

It all started May 13, 2003, the spring of Laura Jackson’s eighth grade year. Life was finally getting exciting. High school was about to start and so was cheerleading for the Stevenson Spartans. It was the week of tryouts and Laura was beyond excited. She had been cheering since fourth grade for the city of Livonia, and this was finally her chance to make it onto the squad to perform for the high school football games. She had been well prepared for this tryout, memorizing the cheers over and over and working on her gymnastics. She had her back tuck ready to show the judges, thinking if she landed this there was no doubt she would land a spot on the team.

When it was time to perform her tuck, something went terribly wrong. Halfway through the flip she fell from the air and landed on her neck. Immediately, everyone knew this was not going to be the kind of accident you shake off and walk away from. She was air lifted to the University of Michigan Hospital and sent into the ER.

When she wound up in the hospital she knew things were not the same. She was informed her heart had stopped seven times and she was now ventilator dependent, with a C-1, C-2 spinal cord injury. She could barely speak and was unable to move or feel anything from her neck down. She received a halo in order to keep her head up and neck straight.

She was only 14 years old, with so many hopes and admirations that she had planned on accomplishing in her life. All of that was on hold now. From that horrifying day in May until Mid-October, Laura’s new home was the hospital.

Her whole life had been completely altered by the time she was released to go home. She was now restricted to an electric wheelchair. An elevator was installed in her house so she would still have access to all of the rooms. Their SUV was moved to the back of the driveway, and the wheelchair accessible van became her new source of transportation.

Her bed was replaced with a hospital bed and instead of being able to take care of herself she now relied on everyone else. Nurses began to come to their home to get her in and out of bed, wash her hair, get her dressed and do any of the other simple activities people so often take for granted. She no longer could feed herself, scratch an itch on her face or shake someone’s hand when they reached out to greet her. The most movement she had was when she would spasm or when she attended her visits to physical therapy where they worked with her to try and keep her muscles active.

About a year after the accident happened, Laura and her parents flew to China to pay a visit to a Dr. Hongyun Huang. They had previously met him when he had visited Michigan and made the decision to go see him to receive spinal cord surgery on her OEG cells that could not have been done in the United States. These cells protect neurons that are part of the olfactory system and help those neurons in developing and repairing themselves if necessary.  After the surgery was completed she was able to breathe on her own for about 15 minutes, and gained additional movement in her neck and shoulders.

“Bahama Breeze” was full of people who recognized Laura. Throughout the meal, on three separate occasions people came up to the table to speak to her. One was a family friend and the other two were complete strangers. They were just people who had heard her story or seen her on television before. All they wanted to say was that she was a true inspiration. She thanked them as they walked away and continued on; as if this were a daily occurrence she was all too familiar with.

Since her surgery in China, Laura has continued working towards recovery. She still attends physical therapy five times a week. She has spoke at rallies promoting stem cell research with public figures such as Bill Clinton, made appearances in television commercials for Proposal 2 and University of Michigan Hospital and was voted Most Inspirational at the 2010 World Stem Cell Summit. She now can breathe on her own for up to two hours, move her shoulders with more ease and has gained new sensations in certain spots when she is touched.

She takes classes at Schoolcraft Community College and will soon be done and moving onto a University. She volunteers at Brother Rice helping out boys who suffer from unfortunate circumstances in their home lives. Just like any other 22-year-old she shops, goes to the movies, out to eat, has nights out with her sisters and friends and enjoys life as much as possible. She still speaks of the day she will get married and what her children will be like. Laura does not sit around feeling sorry for herself. She makes the most of the situation and works as hard as she can to lead a normal life, continuing to fight for a miracle.

So here she sits, just like any other female with her two best friends. The still of her body, unable to move is out of mind. The noise of her ventilator seems so silent compared the sounds of everyone at the table eating, laughing and reminiscing. With high spirits in the air, it is forgotten that Laura is any different at all.