Central Michigan football hasn’t fared well in the first two years of the Dan Enos era. The team has suffered through consecutive 3-9 seasons, following one of the best four-year stretches in school history (38-17).

The days of Dan LeFevour and Antonio Brown lighting up the MAC West and willing the team into the AP Top 25, are but a distant memory. The Chippewas are now fighting to stay out of the Mid-American Conference cellar, a far cry from the 2009 season in which the team won 12 games, including a memorable upset in East Lansing.

Enos’ squad will get another chance however, to rise from the ashes and at the very least give Michigan State a run for their money, when the Spartans travel to Mount Pleasant on Sept. 8. The Spartans will come in as heavy favorites, likely entering the contest with a ranking no worse than where they sit currently in both the AP Top 25 and the USA Today Poll, at No. 13 in the nation.

In many respects an upset against the Spartans this season, however unlikely, would be an even more significant victory than the one in 2009. Considering Michigan State won a share of the Big Ten title last season and Central Michigan barely registered a pulse, it would come as a heart breaking loss for the Spartans and the marquee win of Enos’ coaching career thus far.

But let’s not kid ourselves, the probability of such an upset is slim and you won’t see any bold predictions here. With that being said, Central Michigan does have room for optimism this year, if only because there is nowhere to go but up.

This year is senior quarterback Ryan Radcliff‘s swan song, his last chance to lead the Chippewas beyond mediocrity and into MAC West contention. Expectations will not be high this season, but that may be a blessing in disguise. Central will play seven of their 12 games at home, an obvious advantage that should all but ensure a better record than the previous two campaigns.

In addition to the advantage the schedule provides, there is plenty of talent around Radcliff this season. The maturation of the talent around him could mean better results than he has had in the past. With the likes of senior receivers Cody Wilson and Jerry Harris, as well as sophomore Titus Davis, there should be no reason the Chippewas can’t have one of the best passing attacks in the MAC.

The running game will also be a factor and should be an even greater focus this season, with a tremendous stable of running backs at Central’s disposal. Zurlon Tipton, Anthony Garland and Tim Phillips can all be highly productive backs if given the opportunity, with each having a specific role to play in this offense.

But if Radcliff can’t produce early, with the plethora of weapons around him, Central Michigan fans might get a look at the future of Central Michigan football a little earlier than scheduled. With Enos facing pressure to put some wins on the board in his third year at the helm, the coach could look to redshirt freshman and fan favorite Alex Niznak, if and when Radcliff falters.

With that said, Radcliff isn’t in any danger of losing his job as it stands. Niznak is still raw and would benefit from more time watching from the sidelines.  But the fifth-year senior needs to produce more than just solid numbers this season. He needs to provide what LeFevour provided before him; the believe that with Radcliff under center, the team always has a chance to win.

Late game heroics, as much as record-breaking statistics, made LeFevour the quarterback he was. It’s time for Radcliff to prove why he’s basically been the unquestioned starter since LeFevour’s departure. His talent and production won’t be enough this season.

This season, he has to win. 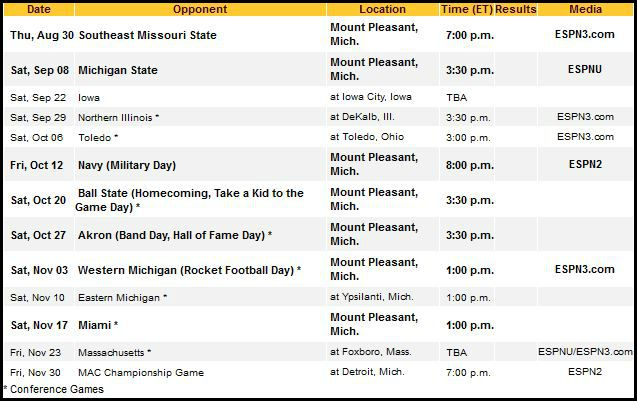