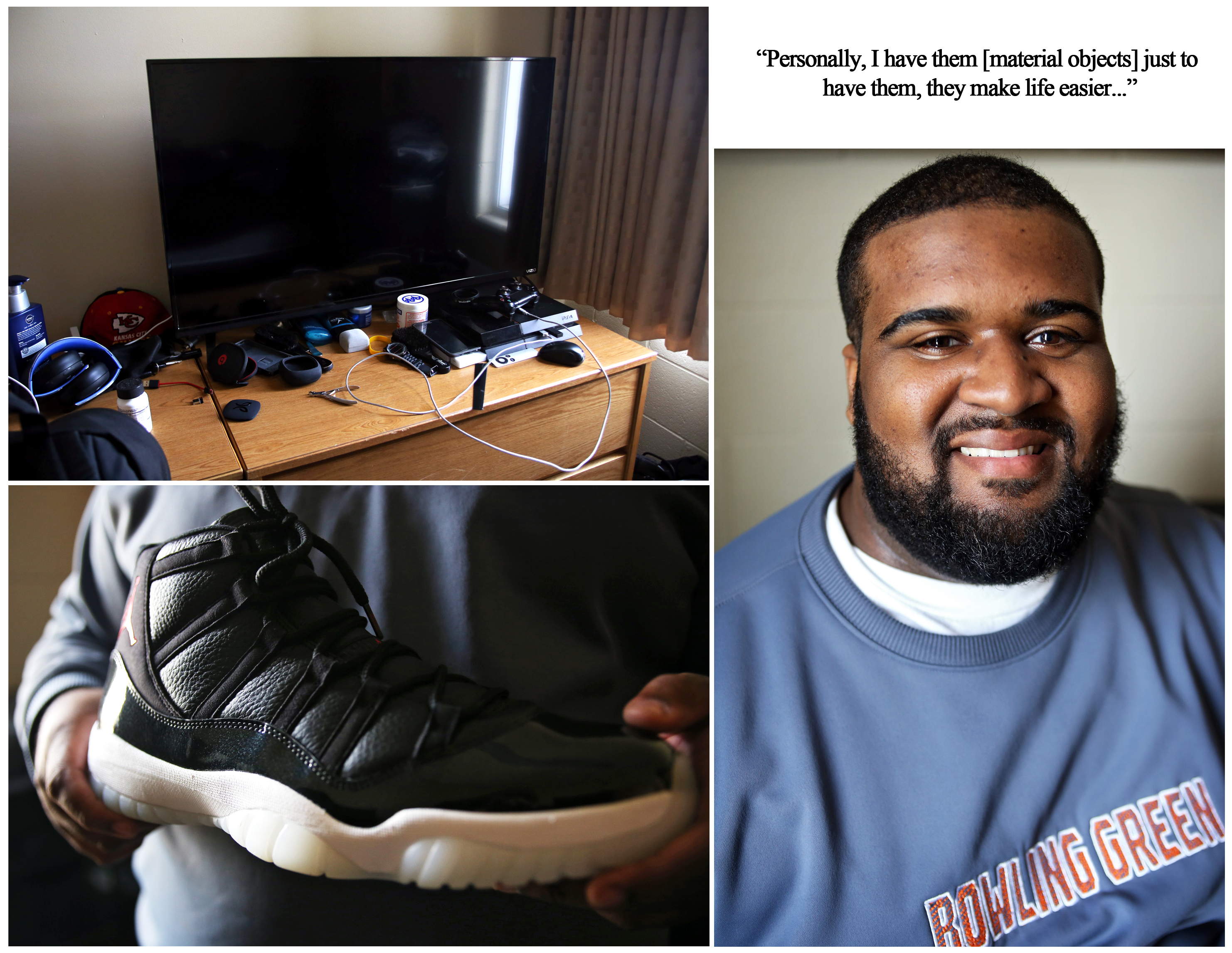 Central Michigan University students discuss the most meaningful objects in their room as well as talking about the value they place on material objects.

This project was started due to a growing curiosity on my part, as to why people choose to own certain objects and the want to discover the personal meaning behind those objects.

Nearly all of the material objects in my life have a very important meaning behind them and I was curious if others placed the same value on objects as I do.

Here’s what Grand Central found out about students and their objects. 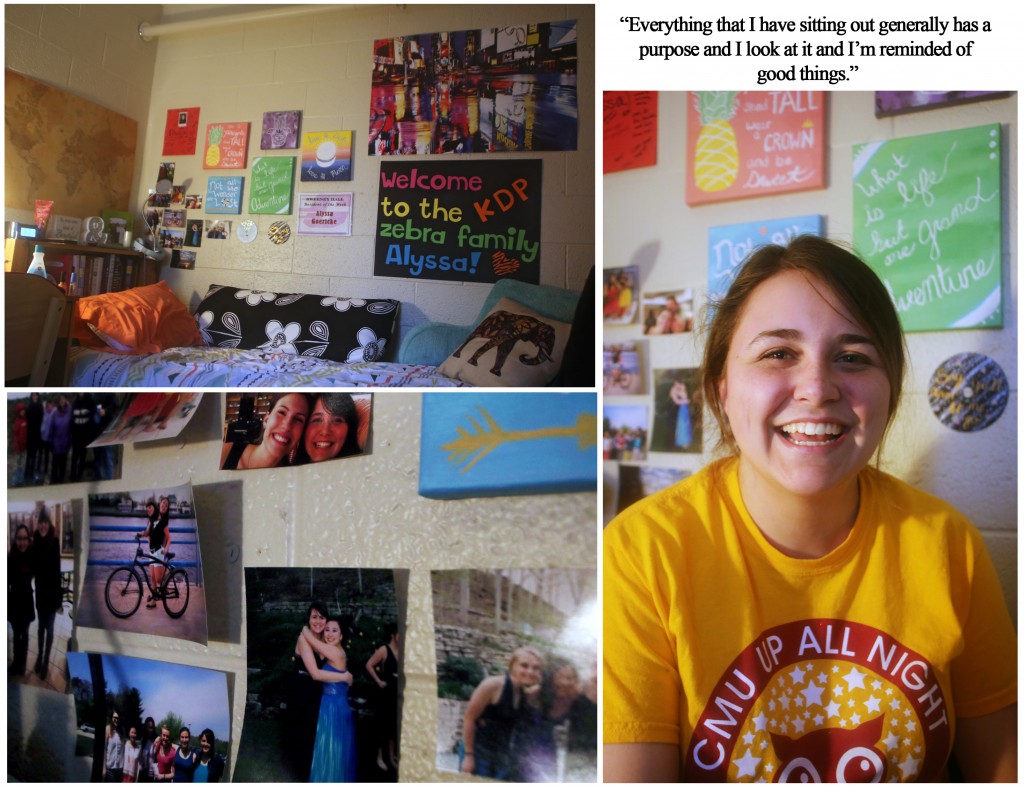 “The pictures hold the most meaning because they’re all pictures that are with my friends and family. It’s just kind of things from high school that I don’t want to forget. Each one has its own memory,” Alyssa Goericke said as she talked about the photographs hanging above her bed.

“I love having friends and I love surrounding myself with people who want to enjoy my company and also who’s company I enjoy. As well, each person I was able to get to know and each person I have specific memories with and that’s why I like having the pictures up there so I don’t forget the memory of that incident,” Goericke said.

“You know, when I look at and I see it and I wanna buy it. I come up with the excuse that it has a purpose, but I probably own a lot of material items and eventually those items are put in a drawer and I forget about them, but it’s the stuff that I have sitting out that means the most. Everything that I have sitting out generally has a purpose and I look at it and I’m reminded of good things.”

“For me, it doesn’t matter if I have 300 friends or if I have a close couple handful, because I want people that I can talk to or if I haven’t seen them in a couple months, text them or call them. It’s those people that they actually try and stay in touch with you – you know [they] have a special meaning to you in your life, which is really all that I could ever want and all that I could really ask for.” 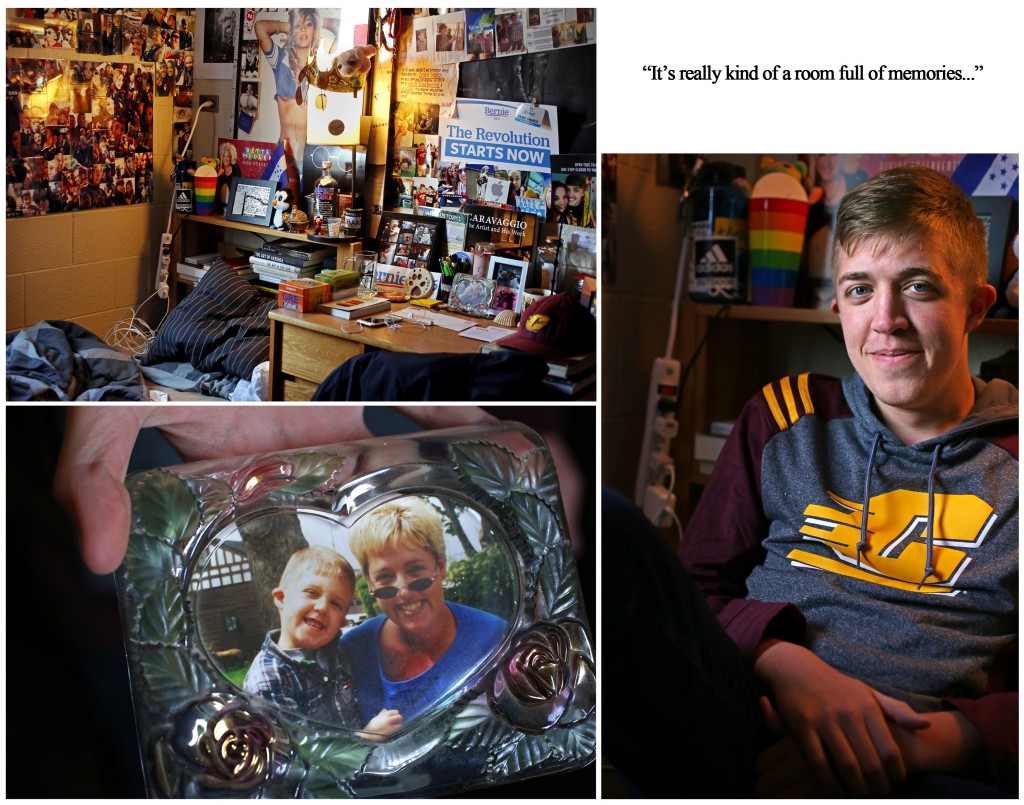 “I moved around a lot as a kid, so a lot of stuff has come and gone in my life and I think that’s the only thing that’s stayed throughout all the houses I’ve moved to, all the schools I’ve gone to, every room I’ve ever had. That picture and that frame has stayed with me every single time,” Drake Smarch said as he talks about the picture of him and his mother, which sits on his desk.

“I moved out when I was 17, but that’s what repaired our relationship tenfold and ever since it’s been 100 percent great, all the time, and I keep that photo with me everywhere,” Smarch said.

As Smarch talks about the pros and cons of moving around a lot while growing up he mentioned, “I can’t say to anyone, ‘Oh, we’ve been best friends since third grade, I don’t have that opportunity or experience. I always got a new start and I learned how to be a people person very quickly.”

“Over the years, I’ve slowly began, not necessarily hoarding, but hoarding as in everything has been either moved and gotten lost. Everything’s in a constant shuffle, so that’s why I have so much stuff, and so many photos, and so many life experiences within my room because I have trouble letting things go.”

“I believe that if you look at these photos and look at my room, you can see a lot of material objects but 90 percent of the material objects in here has memory behind it, it’s more non material. I randomly would glance by one [photo], smile and remember that time, so it’s really kind of a room full of memories or room full of experiences and reminding me what’s important in life.” 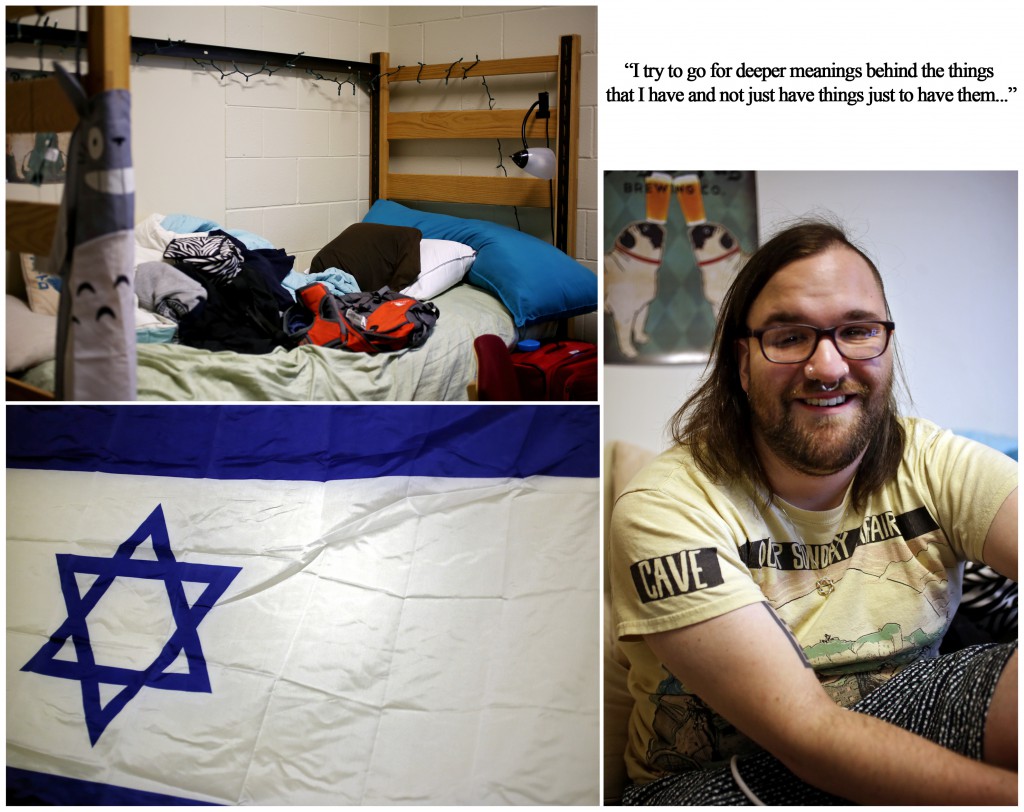 “I’m not really the most religious type, but there’s a whole thing in Jewish culture and Jewish ideals. It’s tikkun olam, which is basically a social action trying to make the world around you a better place. If you can make the world a better place just by doing something that’s the most important,” Eli Magen said as he discussed the Jewish symbol in his room.

“I took a birthright trip in December and went to Israel and basically found and experimented with my Jewish identity. I wasn’t able to buy a flag from Israel, but I bought that soon after so it’s really helped me to remind me of my trip and remind me of everything I’ve learned,” Magen said.

“I try to go for deeper meanings behind the things that I have and not just have things just to have them. I try to get things that I feel would have at least a greater purpose than just existing in this room,” Magen said.

Magen decided to have is bar mitzvah during his trip to Israel. “Ever since I’ve gotten the flag and ever since I went to Israel, I feel a lot closer to my family too.” 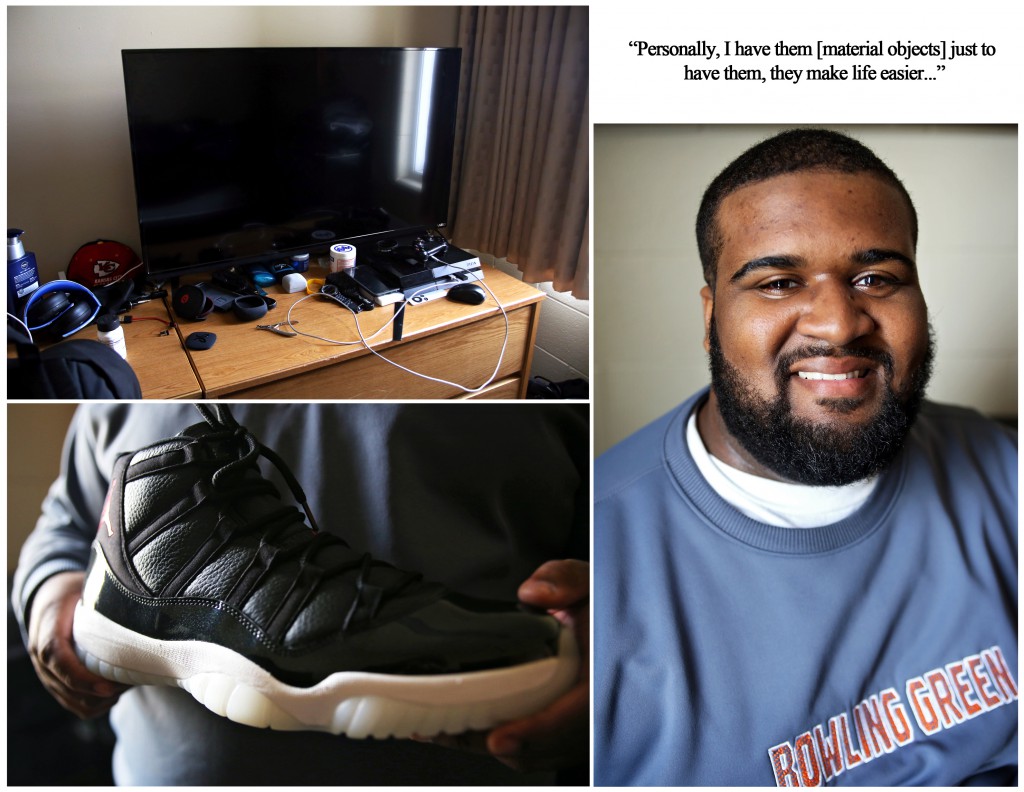 Fletcher Flennoy talks about the most meaningful object in his room, which is a pair of shoes he recently bought.

“It’s called the 72 and 10. It’s basically a representation of Michael Jordan in the 1996 Bulls. Their record was 72 wins and 10 losses and that’s currently the record for the most wins in a season.”

Flennoy owns around 40 pairs of shoes.

“Personally, I have them [material objects] just to have them ’cause they just make life easier. Mostly, I don’t look for meaning in stuff except for shoes.” 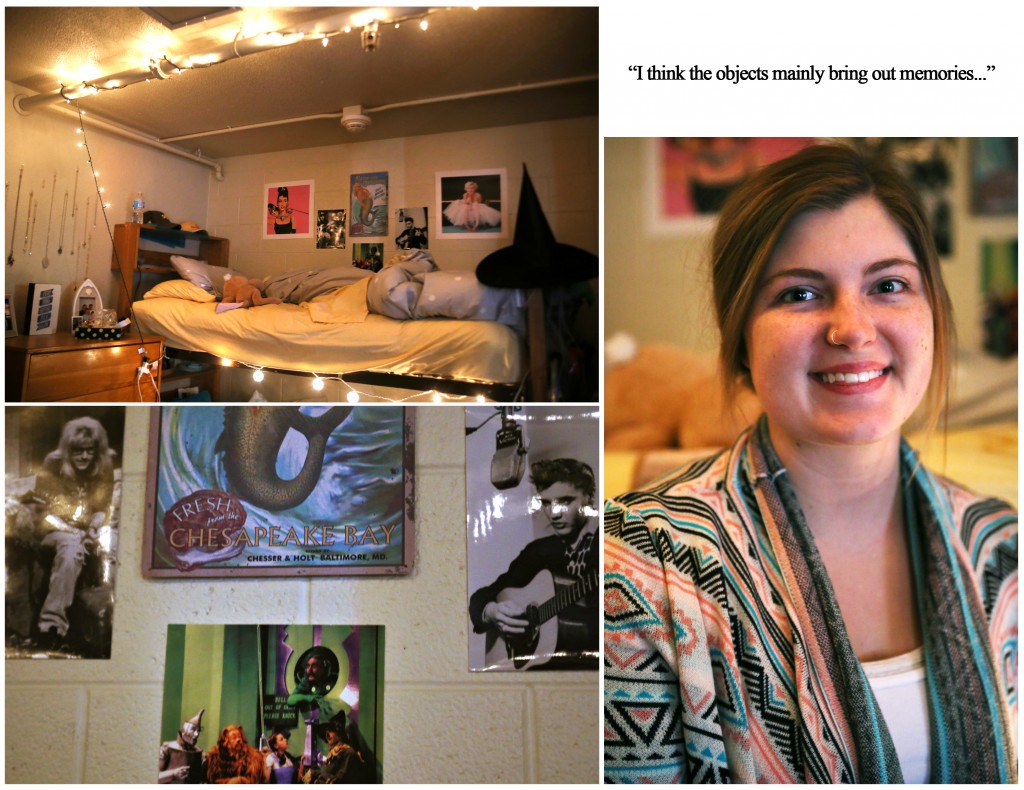 “My grandparents loved Elvis Presley, I grew up listening to his music, so I have him up there. I grew up doing Dorothy pageants, I always loved ‘The Wizard of Oz.’ Me and my brother were always made fun of that we were Garth, well I was Garth, from ‘Wayne’s World.’ I have an obsession with mermaids, they’re great,” Haley Jones said as she talks about the most meaningful objects in her room, which hang on the wall above her bed.

“I think the objects mainly bring out memories. I think that’s why people collect things as much as they do,” Jones said. 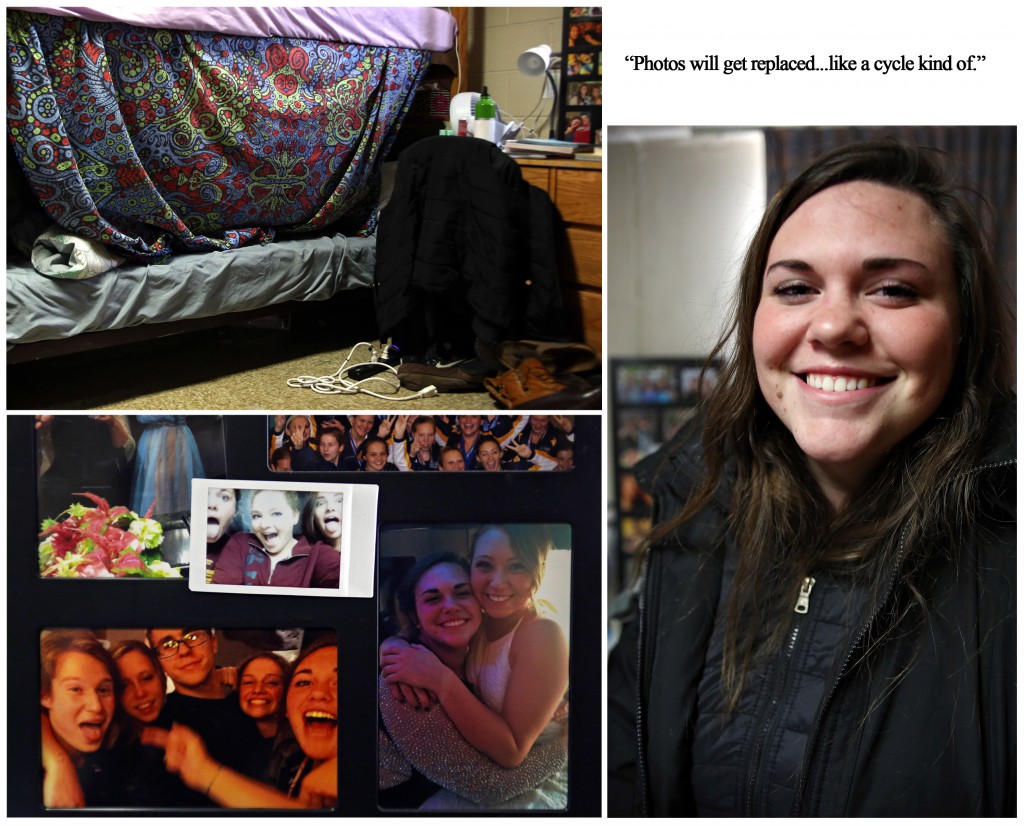 Maria Elie’s most meaningful object in her room is the picture frame filled with photos of family and friends from high school, which sits on her desk.

“It’s the people that mean the most to me.”

Material objects don’t hold a lot of meaning for Elie.