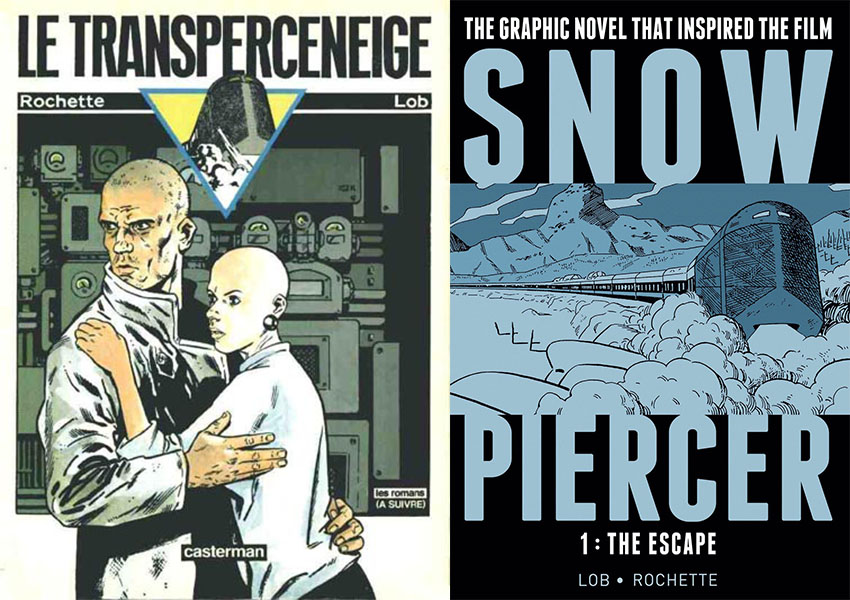 “Across the white immensity of an eternal winter, from one end of the frozen planet to the other, there travels a train that never stops. This is the Snowpiercer, one thousand and one carriages long. This is the last bastion of civilization…”

-Opening narration from “Snowpiercer 1: The Escape”

Illustrated in stark black and white by Jean-Marc Rochette, “Snowpiercer” takes place in a not-so-distant future world that has been left desolate and devastated by a global climate disaster.

Whether this disaster was natural or man-made is never revealed, but in this futuristic time period, Earth’s surface is completely covered by a thick blanket of ice and snow.

The last remnants of humanity can be found on mysterious “Snowpiercers,” which are large trains that circle the globe indefinitely.

To maintain order among the train’s inhabitants, there is a strict caste-like system. The “gold” cars in front house the rich and well-connected upper class members of society and the quality of life drops dramatically as one travels the length of the train’s 1,001 cars.

The end of the train houses the “tail,” which is home to the lowest-class citizens, unfortunately left to starve and die.

“Snow Piercer 1: The Escape” begins with guards capturing and detaining a resident of the “tail,” named Proloff. After making a daring, desperate escape from the squalor of the tail, Proloff is driven by an intense desire to make a new life among the other dwellers of the Snowpiercer.

Sadly, the living-conditions of the tail allow authorities to quarantine Proloff and his companion, Belleau, a social worker trying to help residents of the forgotten end car. Essentially portraying political prisoners to the higher authorities aboard Snowpiercer, the duo is escorted toward the front of the train in order to stand trial.

Along the way, both Proloff and the reader are exposed to all walks of life that inhabit the different parts of the train.

There was a long period of time between the release of “The Escape” and the next installment of the series “The Explorers,” due largely to Lob’s death in 1990. Nevertheless, “Snowpiercer 2: The Explorers” was released in 1999, and its continuation, “The Crossing,” followed in 2000.

“The Explorers” takes place several years after the events of the first “Snowpiercer,” this time aboard an even larger train deemed “Icebreaker.” After losing communication with Snowpiercer, residents of the Icebreaker live in fear that the two trains may collide at some point.

The story follows a larger cast of characters, though once again, the focus centers around a male and female duo. Puig Vallès is an explorer of the world outside Icebreaker and his companion Valerie Kennel is the daughter of the Icebreaker’s main operator.

“The Explorers” expands upon many of the themes explored in “Snowpiercer,” including the simmering resentment sometimes held between social classes, the power political figures can hold over the media and the vanity and ignorance that comes with “higher class.”

The English translation of “Snowpiercer” is collected in two volumes: