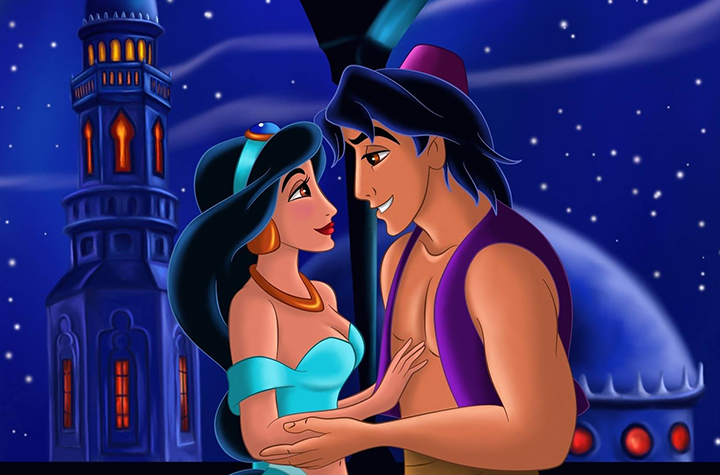 KELLY: Hi everybody, this is Kelly Rocheleau and Ali Wilson. Each week we’ll be discussing some of our favorite childhood movies and the implications they have on gender issues, marriage and other issues that you may not have noticed when you were a wide-eyed youngin’.

We’re not here to tear any thing apart — unless the movie really deserves it. The first movie we’ll be looking at is one of my personal Disney favorites and a staple of the Rocheleau household for at least the first 13 years of my life: 1992’s “Aladdin.”

Although I will gladly tell anyone right off the bat that I love this movie, I can’t help but wonder how many girls saw Princess Jasmine when they were younger and thought, “I’m going to look like her when I’m older!” I’ve talked to at least a couple of girls who say they aspired to have Jasmine’s figure while growing up.

“My boyfriend and I both think Jasmine is sexy,”  Central student Mariah Martinez said.

I can’t really relate to this; while I thought Aladdin was a cool, smooth-talking guy, I never imagined I could actually be like that. Open purple vests never suited me much. Although Jasmine doesn’t get to contribute much to the plot — except maybe to add to the theme of everyone in the film being trapped in some way, and motivating Aladdin and Jafar in their respective goals — she, at the very least, does try to go after what she wants on her own terms, by going to a marketplace and calling Aladdin out on his crap. You could also argue that whiny-ass Aladdin should just get a job, but then you wouldn’t exactly have much of a movie. What are your thoughts, Ali?

ALI: My personal experience with Disney tended not to involve a lot of self-comparison until I was older. As a child, “looking like Jasmine” had more to do with wearing a costume and putting my hair up, than reaching certain bodily proportions. It was more when I got older that I started comparing my body to standards I’d been exposed to my whole life.

In fact, as far as comparison goes, I think that Jasmine represents sort of a good thing for Disney, in that she is one of the few nonwhite princesses. She may be the only Middle-Eastern princess in the Disney repertoire but I’m glad she is there to represent some little girls. I was a little blonde white girl, so I had plenty of Disney princesses who “looked like me” in that very basic sense.

I think probably a worse problem with this movie is that Jasmine is the only Middle-Eastern princess, and she is a pretty sexualized portrayal of a woman from an “exotic” culture to most Americans. She is not the first or only sexy princess, but I could see the argument that Jasmine is sort of a sexy caricature from that culture. And she certainly isn’t the only stereotypical character that could be found offensive in that movie, which is definitely an issue (the merchant in the beginning, for example).

KELLY: I definitely agree that Jasmine, at least visually, is very much a sexy midrift-and-harem pants stereotype. I have to admit that she isn’t overly interested in minding a man, and her entire reason for existence isn’t a brick-chinned bureaucrat in a suit (like Prince Eric in “The Little Mermaid”) but I digress.

I’m fairly certain that most of the women in “Aladdin” are either clothed like belly dancers or are bigger, non-sexual ladies covered head-to-toe in clothing. The only bigger woman who is sexual in the entire film is the woman in the “One Jump Ahead” scene, who says that our dashing thief is rather tasty (If you’re reading this, I’m sure there’s a decent chance you remember this exact moment, or it’s entirely possible that I let lines from Disney songs occupy far more space in my brain than most human beings).

Although the movie is aimed largely at children, it’s definitely worth noting that Aladdin and Jasmin have, for lack of a better term, the “most white” features. Characters that have facial features that could potentially be interpreted as “stereotypically Middle Eastern” are villains, like Jafar. If it were a live-action film, I could see Jafar being represented inappropriately as a stereotype. Also, I’m glad you mentioned that, as a kid, you didn’t feel like you absolutely had to look like your waist had been squished together by torture chamber walls. But you felt that pressure when you were older?

ALI: I think that pressure is common for most teenage girls, if not every teenager. Disney certainly wasn’t the only factor putting on this pressure, but seeing wasp-waisted, long-legged princesses like Jasmine didn’t always help.

KELLY: Don’t forget the Amanda Seyfried-like eyes and the floatation-device head! But I really do like the film. Honestly, it’s one of my favorite Disney movies. I mean, we haven’t even talked about Robin Williams as the Genie, which I love. I’d like to think that somewhere, in a vault, there is a tape of Robin Williams and Gilbert Gottfried going off on horribly dirty riffs while in character. My life’s goal is to find and watch that before I die.