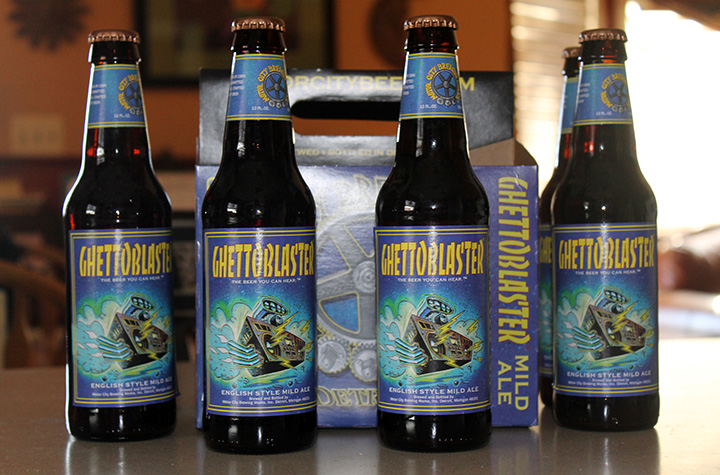 Ghettoblaster, a beer by Motor City Brewing Works is light and crisp. The makers of this beer call its color tawny, but I say amber.

The difference between the two is anyone’s guess. It probably takes a palate much more refined than mine to detect different shades of the same color. Are forest green and jungle green, really, all that different? And if they are, how is one supposed to taste the difference? Being the uncivilized barbarian I am, all the talk in beer criticism about caramel notes and hints of burnt toast make me wonder why I ever set out to write about beer in the first place.

But what’s cool about this beer — besides its (alleged) tawniness — is that it’s made in downtown Detroit, blocks away from Wayne State University and nearby other famous downtown landmarks. A business can make a big impact depending on where it positions itself, and in this case, the Motor City Brewing Works has placed itself in the artistic, academic, and cultural center of the city.

Detroit has its opera, orchestra, gallery and academy. It has a lot of things — rude accusations from Detroit haters usually too far removed from the action to know any better notwithstanding — and here is some of its beer.

What drew me to this brew in the liquor store though, was not the location of the brewery, but the name of the beer. Let’s talk about the name. In our vernacular, the word ghetto is a pejorative, racially-charged epithet used to describe a community where lower-class minorities live. It’s an accusation, unfortunately, sometimes leveled against Detroit. The people of Detroit however, have ways of fighting back against their detractors, and this beer is a part of the fight.

Subtitled, “The Beer You Can Hear,” this drink takes a word that is meant as insult and flaunts it like a trophy. Associated with this beer is a project, described by the back label of my beer as “an on-going documentation of the Detroit music scene.” The brewery has two albums for sale on its website including one that is made up entirely of recorded live performances at its taproom.

I imagine  just drinking the beer, as I’ve done, is only half of the experience. Although the drink itself is pretty good, it’s made clear that to get the most from this beer — and to fully appreciate its rebelliousness — it takes a trip to the taproom for fresh Detroit beer, fresh Detroit music.