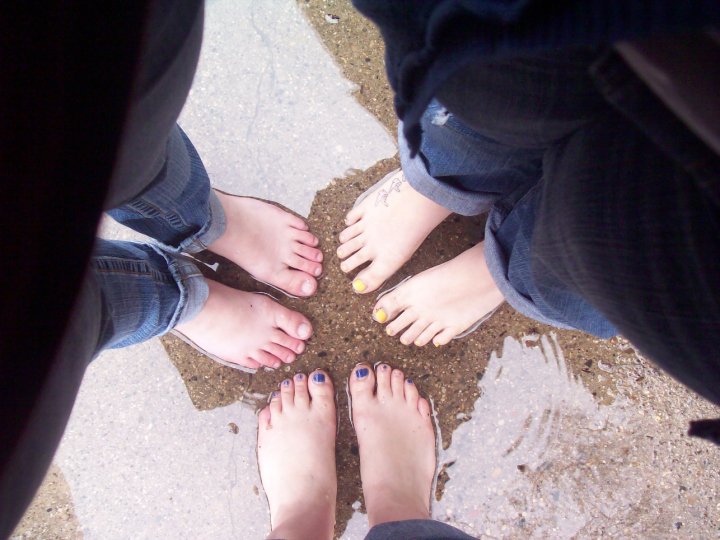 “Can you imagine being 13-years-old and never owning a pair of shoes or being denied your education because you don’t have shoes?”

One for One: the philosophy of international company, TOMS Shoes, provides a pair of shoes to a child in need for every pair sold. The company is committed to not only providing for those in need, but also to educate the public on the health risks that accompany lack of adequate footwear. Since 2006, TOMS has donated more than a million pairs of shoes around the world, according to their official website. According to the website, “The One for One movement is about people making everyday choices that improve the lives of children.”

The effort to bring TOMS awareness to Central is largely led by the TOMS Shoes registered student organization, or RSO. RSO secretary and integrated public relations major Kaity Jerolamon says that she got involved because her and her best friend actually went to start a TOMS RSO on campus and found out that there already was one. Jerolamon said the club was disorganized at first, but through hard work and order, the club is on track and working to spread the word about TOMS.

The RSO has many events in the works, including a battle of the bands contest. Recently, the RSO teamed with the Threads, the Apparel Merchandising and Design Department, to hand out promo codes at their recent fashion show. They also raffled off a $25 TOMS gift certificate to a student and the winning designer received a $50 certificate. TOMS also hosted a fundraiser at Bennigan’s, 2424 S. Mission St. and holds meetings every other Wednesday in * at 7p.m.

“I think a lot of people want to donate to charity but don’t have the money to and to be honest, won’t do it if they don’t get anything out of it. This way they’re helping out kids,” Jerolamon said.

Every year TOMS hosts a national “Day Without Shoes,” and last April marked Central’s first official barefoot day. The event was a challenge for those who chose to participate. The day turned out to be soggy and cold, but the focus of the event was to simulate the conditions impoverished children are forced to live in everyday.

“It was freezing, it was wet, it was raining all day,” Jerolamon said.

According to Jerolamon, the cafeterias and even local businesses began to put signs up saying “no entry without shoes” that day because they began to notice how many people were barefoot on campus.

“It’s the little things you don’t realize like ‘oh if I don’t have shoes I can’t eat at this restaurant or go to my class,’ but it is the reality for these kids,” Jerolamon said.

Many of the students got a taste of what impoverished children experience every day. Jerolamon said that one her friends stepped on a rock during the day and had to go and get it removed because it had lodged itself in her foot and was liable to get infected.

“Even though it sucked she was glad for it because she got the [true] experience. Having that discomfort gives you a real view of it all,” she said.

There are also Central students outside of the RSO who chose to raise awareness and spread TOMS’ message of love. Special education sophomore Kaite Young-Kendall and anthropology sophomore Nicole Infante organized a TOMS sole party in Barnes Hall.

“The TOMS shoes party was the idea that you buy a pair and get together and decorate them,” Young-Kendall said. “Basically, we bought paint and supplies for decorating then asked two performers, Joe Hertler and Landon Winociki, to come play. It went great! Even though not everyone bought shoes, they all knew about TOMS when the party was over.”

People are always finding new ways of promoting TOMS Shoes. This summer, the Mackinac Bridge Walk was turned into a barefoot journey organized in order to create awareness for TOMS. Students gathered from most of Michigan’s universities and camped out together while bonding over their love of the charity.

“I loved going on the barefoot bridge walk in Mackinac City this past Labor Day,” Infante said. “There were groups of college kids from all over Michigan and we just got together to support TOMS. It didn’t matter what school another group was from, there were no rivalries, just a common bond of loving TOMS.”

The walk was five miles across the bridge barefoot.

From humble beginnings, created out of founder Blake Mycoskie’s apartment with two unpaid interns, TOMS has evolved into a full-on movement. The philosophy is simple: buy a pair of shoes and a child in need receives a pair of shoes as well. Even though the shoes can cost anywhere from $50 or more, many people see it as buying two pair and feel it’s worth the cost because of the impact TOMS has had on the lives of many.

“I feel it’s worthy because not only are they giving shoes, they’re also giving education about foot care when they give the shoes out,” Young-Kendall said. “Education is invaluable. I care about it because in America shoes aren’t a luxury, they’re required. It hurts my heart to know that isn’t the case everywhere.”