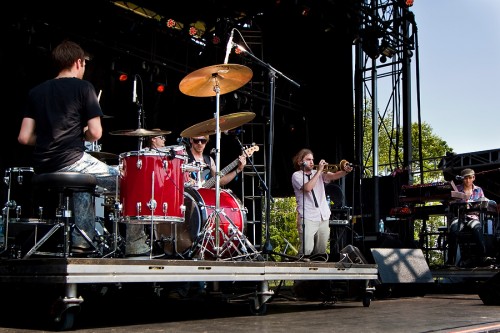 While some artists count down from ten and take a deep breath, not taking things too seriously has become a business for the Ann Arbor favorites, The Macpodz. Serious business.

In 2006, the group experimented with a Charlie Parker classic, infusing the tune with a roller rink beat of sorts. This led to the creation of their self-coined genre, “Disco Bebop”. Disco Bebop, what many may refer to as “Jazz Fusion”, is a collection of jazz standards, steady grooves and world sounds – certainly party music.

The Macpodz played at the Sherwood Court, Saturday at 2p.m. to an energized Electric Forest crowd. Teeming with original attitude, the show boasted a hefty turn-out, incited an advanced dance party, and sported the highest nudity ratio of any performance at Electronic Forest. Once again, party music.

The group is known to frequent Mount Pleasant’s own Rubble’s Bar, and plans to be back by fall (after their busy summer of touring of course). The ‘Podz’ can also be found regularly visiting Kalamazoo, where the band has played countless shows – including a New Years Eve bash at Bell’s Brewery.

The style of this group is truly one of a kind. Their music is fresh, loud, and technically driven. Deeming the Macpodz a jam band is a gross simplification of their abilities, and originality.

“Jam band” is a term that is thrown around about as often as the word “ironic”. Just as many situations are often coincidence rather than irony, many bands are technically oriented – not jam bands.

These songs have structure, but nothing too serious…remember?

The Macpodz at Electric Forest from Ryan Nielsen on Vimeo.

Latest tracks by The Macpodz