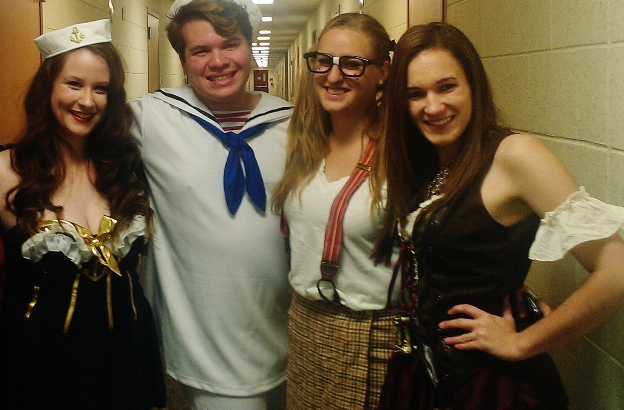 Columnist Will Boleman celebrates Halloween in his sailor costume with his friends.

With Halloween almost here, parties and events are everywhere — you can’t walk around campus without seeing crowds of people in costume.

Dressing up for Halloween leaves a lot to be desired for guys; much is unclear about what is appropriate to wear and what is not. I’ve seen guys in everything from modest clown costumes to next-to-naked firemen getups; I even spotted a few guys dressed as gynecologists (subtle, I know).

Enough is enough — guys don’t seem to have the slightest idea what they are doing when they go out in costume. Someone needs to establish some guidelines; Halloween is not a free for all. With this confusion in mind, here are some dos and don’ts to help you get through your Halloween.

Do dress up, no one has fun being the only one in jeans and a T-shirt.

Don’t dress up as something so obscure that no one knows who or what you are. Keep it simple.

Do pick a costume with pants, or wear shorts underneath your costume. I get that you’re a gladiator and everything, but no one thinks it is attractive that we can see your skintight briefs — especially that poor girl you’ve been hitting on.

Don’t try to throw together a costume last minute. Unlike girls, you can’t just put on some underwear and animal ears and call it good. Make sure you know what you’re wearing at least a day in advance.

Do go to a thrift store to buy your costume. Most of them have Halloween sections and the costumes usually cost less than $10 unlike Halloween stores that will charge up to $70.

Do make sure you come home in the costume you left in. You should not be that sloppy.

Do make sure to account for the weather when you are ready to go out. A jacket will keep you warm and provide pockets for your phone, keys, and whatever else you need on you.

Don’t wear cheap grease makeup. It doesn’t set, so when you sweat, it will drip down your face. Plus it doesn’t look that great anyways. Try investing in something powder or cream based.

Do ask a girl to do your makeup for you. They know what they’re doing.

Do wear comfortable shoes. Just because you’re dressed as an Indian does not mean you should be wearing sandals in forty degree weather.

Don’t embarrass yourself by wearing a revealing or uncomfortable costume. You could run into people you know, or even worse your grandma could see pictures on Facebook.

Do make sure you know if the party you are going to is an ABC (anything but clothes) party, so that you have time to make a costume.

Don’t use an ABC party as an excuse to go naked; I’m positive that is illegal.

Don’t be too scary, everyone likes a good vampire costume, but you shouldn’t be scaring people when you walk down the street.

So whether you are going to a costume party, checking out Main, or just dressing up for the fun of it, keep these guidelines is mind when selecting a costume to avoid any Halloween embarrassment. And remember, that biggest “do” for Halloween is having fun and staying safe!