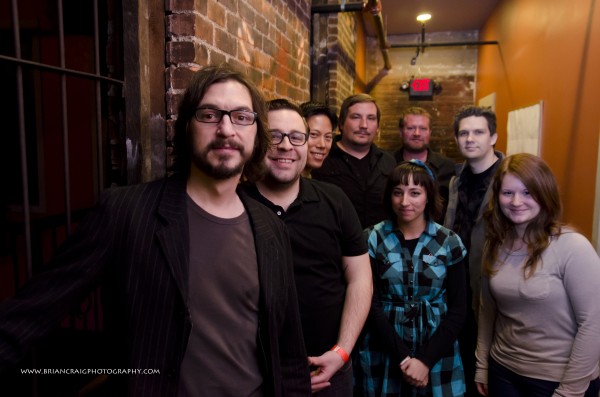 It’s a Friday night in Pontiac and the musicians began setting up in the loft of a larger venue. It’s the CD release show for a band called Brae. Other than the acts of the night, select few are present. Some are conversing. Some are loafing on flimsy stools. Along the coast of the bar the wood flooring has been worn particularly dark by the thirst of thousands of patrons prior.

About a half an hour until doors open and calmly, the equipment is tested with the repetitive strum, beat or, “Check, one, two”.  At the front of the stage is a bearded man nearing 40 dressed in shadowy hues. His name is Brandon Husken and he is the front man for the headlining band. He stood as he beat his drum set, looking mesmerized by the cause and effect. He spoke into a microphone arched from the floor up over his head (an Inspector Gadget-like feature to the stage). He has dark eyes and dark, wiry shoulder-length hair. If the venue were any dimmer, he might as well have blended in.

After the sound check is completed Husken walks into a quieter area to talk. Past the line of fans purchasing tickets and past a room chock-full of instruments. As he finished explaining his recent bout with a cold, he swooped himself below a rope and strolled into a largely empty room with the exception of a giant jukebox.

“I hope this is okay,” Husken said, apologetic there was no quiet nook in a rock concert venue.

As we spoke, people gathered for the release of “Another Time Another Place” — Husken and Brae’s third album since 2008. It is an indie rock album with an almost folksy feel to it and has more instrumental dimension than the previous release. On stage for the night is a cello, a violin, keyboards, guitar (acoustic and electric), a bass and a backup singer — quite the lineup for such a small stage but everyone managed to fit and fit their part beautifully. This more folksy instrumentation is what Husken calls an “earthy feel.” But “Another Time Another Place” cannot simply be defined by its change in orchestral lineup but rather in its lyrical deepness.

“It’s about life and life experiences,” Husken said. “I try not to get into detail about what a song means to me because what I have found is people find their own interpretations of my music … and while it might not be what I had planned, I’m glad it made a connection with them.”

Like any good author, Husken allows listeners to absorb the lyrics and melodies and make their own meaning. For him, it’s a storytelling tool; one that can be manipulated and shaped to fit any theme. A consistent theme for Brae is one of the underdog — and perhaps, that’s just what Husken is.

“I started playing drums when I was about 15,” Husken said. “But I had no intentions of singing lead until about 2008.”

With no formal musical training, Brae’s front man learned to imitate and shape art into something more personal. Raised in Sterling Heights, Husken had a steady musical diet of bands like The Beatles and Genesis.

“I think my musical taste and my direction is probably a reflection of what I’ve listened to all my life,” Husken said. “I think little moments of that all come out in me.”

It seems that both Husken and Brae are a complex collage of musical styles and experiences glued together into one solid presentation.

“Playing onstage is getting easier,” Husken said. “When I first started it was really chaotic. I was always listening to things that were going wrong and not really trying to just live in the moment.”

Leaned up against a tall table in the room with the lonely jukebox, he looked beyond his thick, black framed glasses. He looked a little tired. It could have been the dim lighting or his recent sickness or perhaps the parenting of three children. His mind was running.

“When I was younger I always hoped to have that record deal,” Husken said. “The older I get, the more reality kind of creeps in. I’m still holding out hope that that might be.”

He thanked me for our conversation and said he will be nursing over a hot cup of tea until show time. His throat still bothered him. But as he and his numerous accompanying artists took stage, the dark left Husken and he seemed worry free.

The venue was packed with hardly enough room to move between merchandise tables and the bar. These were faces he knew and loved. They were here to celebrate Brae’s accomplishment. Husken’s face changed and absorbed every vibration of the drum. He emphasized movements just a little bit more as he swayed with every kick of the kick drum. He sang with just a little more affection and his eyes pressed tightly closed, tears nearly willing their way from each corner.