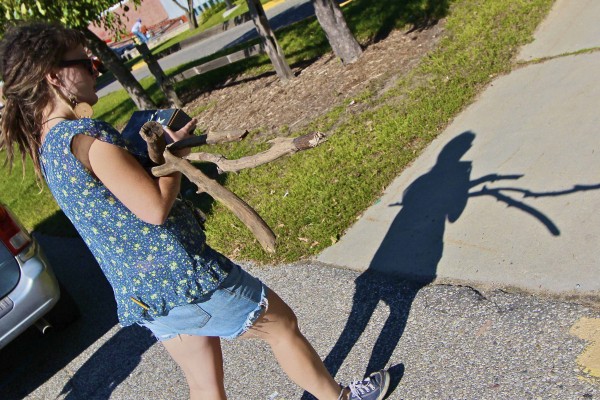 Just let go. Go on, let go of whatever is holding you back; whatever binds you, what it is you’re keeping such a tight grip on. Easy enough right?

These two words pack such a powerful punch that it is hard to realize how much action is really behind them. Mount Pleasant senior Meghan Borland has harnessed the power and meaning of letting go in the art that she creates.

Borland spent countless hours in the studio creating porcelain leaves that she collected in December 2011. But the purpose behind all of the hard work may seem contradictory; in her upcoming BFA thesis exhibition in the art gallery on campus, she plans on having people walk on and break the porcelain leaves.

“People will be scared at first, but then they’re letting go once they realize it’s OK,” Borland said. “It’s about not being afraid to let go.”

As people walk on the leaves, she hopes that they can gather a sense of realizing what work went into making them. Borland pointed out that people often don’t realize the process that goes into making leaves in a natural way, but once someone goes in and makes them by hand — such as she did — there’s a realization that someone did this and there were hours put into the process.

Borland had become aware of nature and began using it in her art when she took a trip to Colorado a few years ago and was told that many of the trees there had been imported.

“I was taken aback by that,” she said. “We take things for granted all the time. I don’t ever want to tell people what to do, just make them aware of these things that happen.”

While talking with Borland, it became obvious that she is enveloped in her art; it is something that was planted into her life and hasn’t made an exit.

“It’s something I can’t just turn off, and I wouldn’t ever want to,” she said.

Her many travels add to the realization of the world around her. Borland is aware of how much we take nature for granted, and how we never really stop to realize the things that are going on around us. By manipulating these processes in her work, she hopes to heighten her onlooker’s awareness of the processes that are so common and trivial to us in nature. Nature is a prominent medium in her work.

“Nature isn’t perfect, that’s something I’ve learned,” Borland said. “I think it’s the imperfections in it that really makes me drawn to it. We’re used to everything having to be manipulated or a certain way, sometimes it just happens and there’s a reason for that slight imperfection, and that’s something that’s interesting to me.”

The theme of slight imperfections has leaked its way into her most recent project: Making a hydroponic garden and growing her own moss. She began with the idea that it had to be aesthetically pleasing.

“Then it got to the point where it’s like why? It just needs to serve its purpose. It was really hard to do that but I think it’s kind of important,” Borland said.

This was just another way of her letting go theme working it’s way into her art — letting go of aesthetics, realizing that some things are for function rather than fashion.

Another recurring theme in her art is the question, “What is real and what is fake?” This is in terms of her man-made nature. Borland has made her own porcelain leaves, sedimentary rocks, and moss. Through this work she presses the question: “Just because I made it does that make it fake?” Good question. With the amount of time spent and devoted to creating these objects, they are as good as real to the untrained eye.

Several of her rocks can be found in a penny bowl at Kaya Coffee House. Customers frequently ask where the rocks are from and if there are fossils in them. Borland put in the work to make these things. She researched how to do it right and collected the clay and leaves. She went through all the proper steps — so why should man-made nature be deemed fake?

With all these different ideas and goals rolling around in her head, a question as an onlooker may be, where to go from here? Borland wants to possibly become a professor, or open her own community art space. This isn’t the driving force behind her work though.

College students are used to constantly working toward a certain career, racking up countless hours of work in hopes to someday have a successful job. Borland’s ideals are far from this. Her time spent is purely creating art as a way of life, it’s something she was born with and will always be a part of her. Her motivation and work ethics are unmatchable.

“I think people have the ability to do whatever they want to do,” she said.

This internal motivation is rare among students. As well as feeling compelled to create, she is an artist as a way of overcoming fears and the fatal ‘what if’ question. Borland talks about taking risks and exploring the possibility that it just might work out, whatever goal is being attained: “I never want to think ‘what if?’ My only huge fears are what if I never do, what if I never did this and I never knew what the outcome is. I say just do it.”

In the hour-long conversation with Borland, her thoughts and opinions have a sort of aged feel to them as if they have been cultivated over the years and thought out. She has taken the time to form these thoughts and put them to use. There’s advice for everyone in her ideals and we can learn from her learning. While growing moss, she learned the value of patience.  She also learned to let go of things uncontrollable — an important lesson to be learned.

The standout idea within all her thoughts was her comparison between people and plants. As with her leaves, every single one is different. There will be no more leaves from fall 2011. Ever. In the same way, there will never be another person made the exact same way. Comparing the differences between leaves hits home with the differences between humans. The porcelain slip that coats her leaves is a fair representation of the hunger for perfection humans have developed, each in its own way.

This realization — the awareness gained of all living things around us — is what Borland looks to achieve through her own hand-made nature.