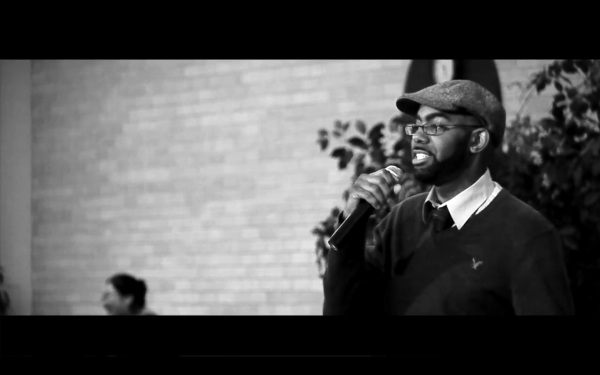 Nearly 225 students showed up to be serenaded by poems from their peers while enjoying delicious dishes like fried chicken, sweet potatoes, mac & cheese and cornbread.

Anyone was eligible to enter the contest and more than a dozen students (14 to be exact), took the stage to share their gift of gab.

Topics included squashing stereotypes, such as being black in America, with poems like Brittany Wright’s “Marionette Minions.”

“I see us all in corporate America with a suit and a briefcase,” she recited, “I see us fulfilling our dreams and meeting our destinies, but that’s only in a perfect world, right now it’s an apocalypse.”

Themes in the poems also shifted from race into such areas as what defines a man with performances like Richard Bronson’s , “I Am a Man!”  The Slam Poetry event even turned the tide on such taboos about sex in American culture with Helen Collins’ “How to Be Sexy.”

There were prizes awarded to the top three contestants decided at the discretion of five judges in the audience. Such prizes included a $25 certificate to the CMU bookstore.

Third place was awarded to Shelbie Moore with her poem, “Citizen,” and second place went to Ricahrd Bronson’s, “I Am a Man!” But the combined efforts of Richard Bronson, Katie Sullivan, Joshua Taylor and Troy Conkright earned the group first place with their poem, “Dear Confederate Flag.”

After the contest was over, Jon Goode closed out the evening to much laughter and applause with a lyrical tirade of poems about growing up, women and relationships, god and religion.

“Kids will be kids but moms will be moms, you can did what you did and mom’s gonna show you right from wrong.

‘But Billy mom let him stay out for an extra few.’

That’s how my mom used to do.”

Goode hails from Richmond, Va., which is evident in his subtle southern drawl. His poems were as funny as they were inspiring and the veteran poet’s strength lies in his relatable words.  Goode has performed his poems all over the country and has appeared on television on several different occasions. He has written for Nike, Nickelodeon and CNN’s “Black in America.”

It was after an appearance on HBO’s “Def Poetry Jam,” however,  that Goode really started to get noticed.

Goode told the tale of the four-year challenge to get on “Def Jam.” For the first three years, he sent the same demo tape to HBO, only to get rejected. They told him he needed to switch his routine to make it more theatrical.

But the next year a lucky break got him noticed by an HBO executive, who asked Goode for another tape. Goode passed along the exact same one he had been sending for the past four years.

He used this anecdote to explain the life lesson of staying true to yourself no matter how hard it is or how long it takes.