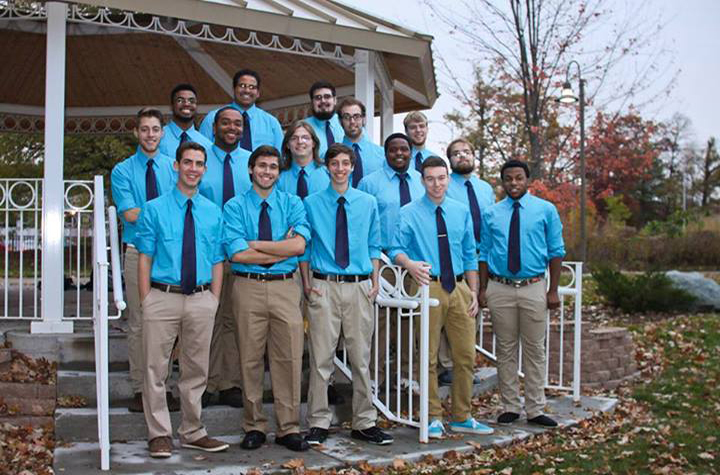 For those who follow the group, it lost a lot of members coming into the new semester, and it’s a completely different look than what the fans are used to.

“We expect a good turn-out,” Justin Toliver, a member of Fish N Chips, said. “Its a rebuilding for the group.”

There was an amazing turn-out and Plachta was packed with family members and adoring fans.

On The Rox opened the show, the all female a cappella group at CMU, and did it with a bang. They sang some unfamiliar songs, but their voices sound very beautiful together.

After that, it was time for Fish N Chips to go onstage, but it would not be a concert without a funny digital short at the beginning. It started the night off with laughter and allowed people to see all the new faces in the group. There are eight new members of the crew and seven returning.

“It was hard preparing toward the beginning with the new guys,” Toliver said. “But we got them caught up. According to Toliver, these men have worked really hard and have learned so many things.

They proved they worked hard this semester. The Chips brought back favorites, like “Thinkin’ Bout You” by Frank Ocean and “Ignition” by R. Kelly.

Their most impressive performance was “Poison” by Bell Biv Devoe. It was humorous and sung very well. The dancing was impressive and showed that these guys can do just about anything. They know how to put on a good show, complete with laughter and swooning the ladies.

“You should expect good music and a good show,” Toliver said. “Dancing, music and big personalities.”

The other stronger numbers performed was a Temptations medley, “Human Nature” by Michael Jackson, “Get Lucky” by Daft Punk, “Let’s Get It On” by Marvin Gaye and “Hallelujah” by Jeff Buckley.

“I hate to be biased, but my favorite song to perform with the group is Hallelujah,” Toliver—who had the solo for this song—said.

Groups such as Fish N Chips are needed on campus because it gives those people, who are not necessarily here for music, a way to express their art.

“Getting people involved in art is important,” Toliver said. “We are losing the sight of what it can do.”

The organization also had a raffle, which involved getting free Fish N Chips merch. One lucky member of the audience got to be serenaded by them, and it happened to be a member’s mother who won They ended the night with an encore of holiday hits and put their own unique spin on it.

The night was full of talent and beautiful takes on popular music. Fans should get ready for their concert in the spring because, no doubt, it will be amazing.

Check out a video from last year’s spring concert.