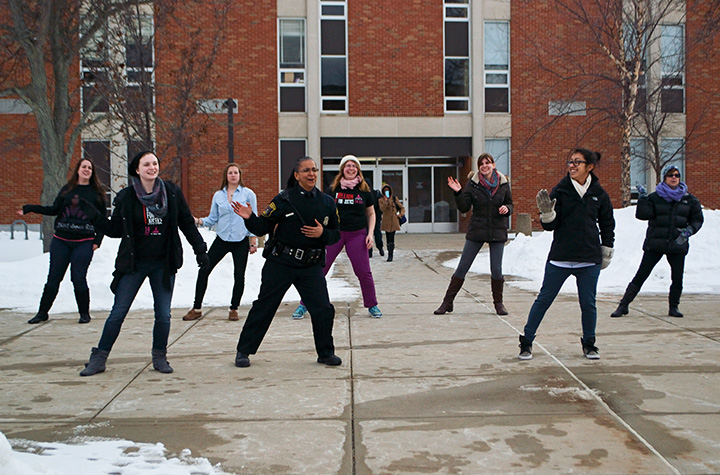 A variety of aromas filled the air in the Down Under Food Court located in the Bovee University Center on Thursday, Feb. 13. An ordinary day of grabbing a bite to eat for most visitors, turned into applause for the flash mob trying to gain awareness on global violence against women.

With “Break the Chain” playing in the Down Under Food Court, a group of seven ladies led by senior Emma Tuthill and campus police 0fficer Laura Rico, stood up and performed their dance routine as on-lookers veered their heads around the corners wondering what all the commotion was about.

The day before Valentine’s Day, was not short of love. This event was filled with love, as it was dedicated to women loving themselves.

“With Valentines Day we typically tend to focus on relationship and romantic love,” Tuthill said. “With having this event the day before Valentine’s Day, we can focus on self love and love for all the women who are survivors and secondary survivors.”

The flash mob took place in several locations on campus Thursday, including in front of the University Center, between Anspach and Pearce Hall, and in the Down Under Food Court.

Junior Anderson Lee was a spectator at the event, was pleased at the performance and what the event stood for.

“The event was very inspiring,” Lee said. “I love how these ladies have gained awareness for an issue that many people don’t talk about on a daily basis.”

This is the second year that there has been a flash mob for this particular cause. Its success last year encouraged Tuthill to get a group of people involved on campus because of “Take Back the Night,” an organization that takes a stand against sexual violence.

Last year 270 countries were involved in One Billion Rising For Justice, the global movement that inspired the flash mob at Central Michigan. This movement, also called V-Day, advocates to gain awareness of rape, incest, genital mutilation, and other sexual violence against girls and women.

The main goal of the flash mob was to gain awareness that one in three women will suffer from this type of violence. The event was deemed successful by those involved.

“Having people be aware that this is a really big issue would make this event successful,” Tuthill said. “Even if it’s just one more person that’s inspired by this event would be great.”

While the event only lasted one day, other events associated with this topic and others could occur throughout the semester.

“All the feminist organizations on campus are connected in a way,” Tuthill said. “We all are there to support each other and that should keep people actively involved.”