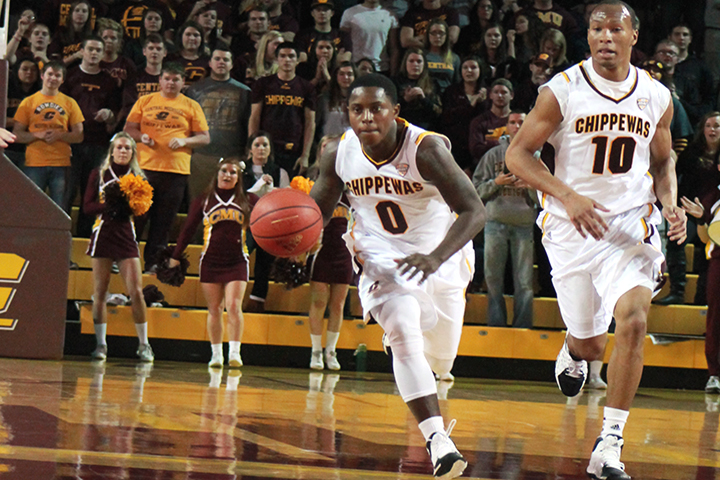 Central Michigan (2-2) ended the first night of the three-day tournament against Austin Peay (2-2) with a 90-75 victory on Thursday, Nov. 21, at McGuirk Arena.

Freshman guard Braylon Rayson added the spark Central Michigan needed with 18 points and two rebounds on a very efficient  7-of-10 shooting, including 2 of 3 from the three-point line.

“I’m real confident in my shots because all of my life I’ve been a scorer,” Rayson said. “It’s nothing really different. I still just play my game.”

Coach Keno Davis said the team really needed this win for their confidence because losing streaks can be tough on a team, especially in the early parts of the season. Central Michigan once again improved in the rebounding department by winning the margin on the glass 36-33, against Austin Peay.

Davis pointed to the extra possessions Central got from offensive rebounds and going 24 of 26 from the free throw line, as the formula that made up for the poor shooting night.

“We didn’t play our perfect game, but we played well enough and if I were a fan coming to watch, I think I’d come back and say ‘I don’t know how good that team is, but they work awfully hard,’” Davis said. “As a coach that’s what you’re the most proud of.”

Davis said last year’s roster was “one-dimensional” because the team only had one reliable shooter. Unlike last season, this year’s team has several  players who can be counted on to knock down shots; Rayson being one of them.

“Nothing about Braylon (Rayson) surprises me,” Davis said. “That’s kind of what we like about him, he’s unlike anybody else that we have. He can do some amazing things and he’s really just learning how to play the game.

“Braylon’s been able to just kind of run up and down the court throughout his career, and I think that the uptempo style of play that we have in place is what lured him here more than anything.”

Davis said that Rayson will be a really good player for Central Michigan, once he gets comfortable and understands the defensive rotations and how to execute the offense.

The Lone Star State native may be a small guard on the team, but he doesn’t let his size stop him from showing others he’s still some tough competition. Rayson said his favorite college player last year was Pierre Jackson because of his high level of energy and speed. Rayson said he looked up to Jackson and plans to bring just as much energy to each game.

“Being 5-foot-9 I have disadvantages but that also has some advantages too,” Rayson said. “I’m faster, quicker and people look at me and they think I’m not going to be able to do much, but I really can.”

Rayson said having several players on the team who can step up to the plate and shoot if someone is out or in foul trouble, builds the team’s confidence. And while Rayson isn’t a starter, only playing 13 minutes total in the game, he has said he’s ready to step in the game and score when he’s called upon.

“I’m real, real comfortable out there,” Rayson said. “It’s still basketball and it doesn’t feel different. It’s just the competition level is just a little bit tougher and that they’re a little bigger out there.”

Rayson is looking forward to coming off the bench more and hoping to bring the same energy in every game.

“Just bringing energy to the team,” Rayson said. “It’s my job. It’s what I’m supposed to do.”