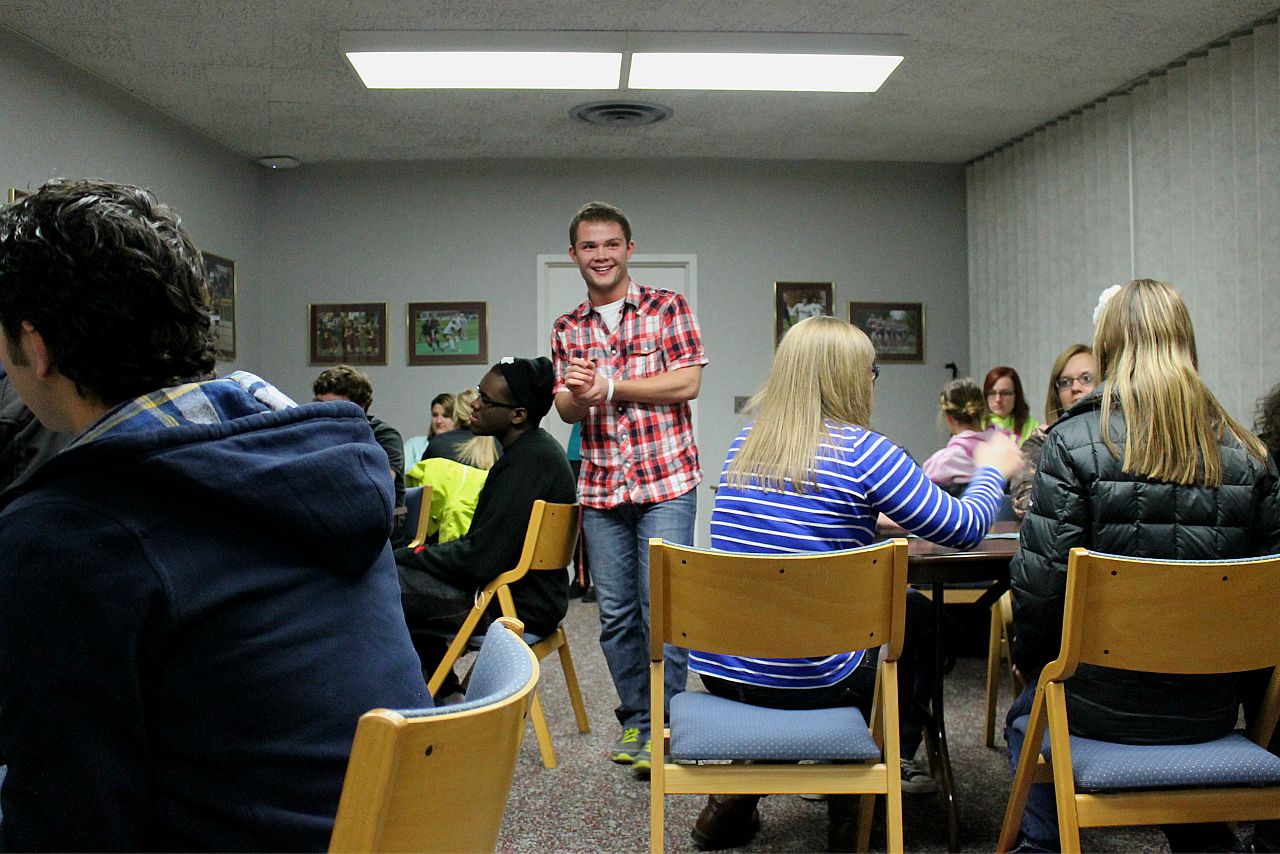 Co-founder of the Mount Pleasant chapter of “Pay it Forward,” James Wilson II, freshman, instructing group members on how to play a team building game on Nov. 15, 2012 on the campus of Central Michigan University. (Brittni Hengesbach | GCMag.org)

Inspired by a friend’s recommendation to watch the film “Pay it Forward,” Ovid-Elsie freshman James Wilson took the movie’s message to heart.

“There’s this moment in the movie that inspired me to be a part of this program,” he said. “I did some research and Googled (Pay it Forward) and became close friends with the National Pay it Forward foundation.”

After creating his Facebook page “Simple Words to Live By,” Wilson decided it was time to do more.

Wilson was so passionate about the program that he started a movement at his high school through his service learning class. Continuing his enthusiasm about the program, he went on to start one here.

Wilson said this RSO has sentimental value to him.

“I have paid it forward to some of my really close friends,” he said. “I don’t do simple pay it forwards. I take a long time to think about it and I’ve done a couple for my friends that have changed their lives for the better. It’s really rewarding seeing them be thankful for what I did for them.”

Wilson also said that he had someone pay it forward to him. He not only wanted someone to do it for him, but he wanted to do it for someone in return.

Wilson couldn’t overemphasize enough the feeling that it felt to have someone there for him. He wants people to see that and pass it on.

Wilson doesn’t want to see himself as a president in this specific role. He wants to be able to guide those looking to join the organization and help others find their way.

The RSO is designed to start a chain reaction by simple, random acts of kindness. Wilson said in an email that members would receive a bracelet (courtesy of the national Pay it Forward organization) and the hope is for members to pay it forward by doing random good deeds for others, big or small.

Wilson encourages anyone who wants to join to log onto OrgSync and request to join “Pay it Forward” to stay updated on current events. Students can also follow the organization on Twitter, @PIFCMU.