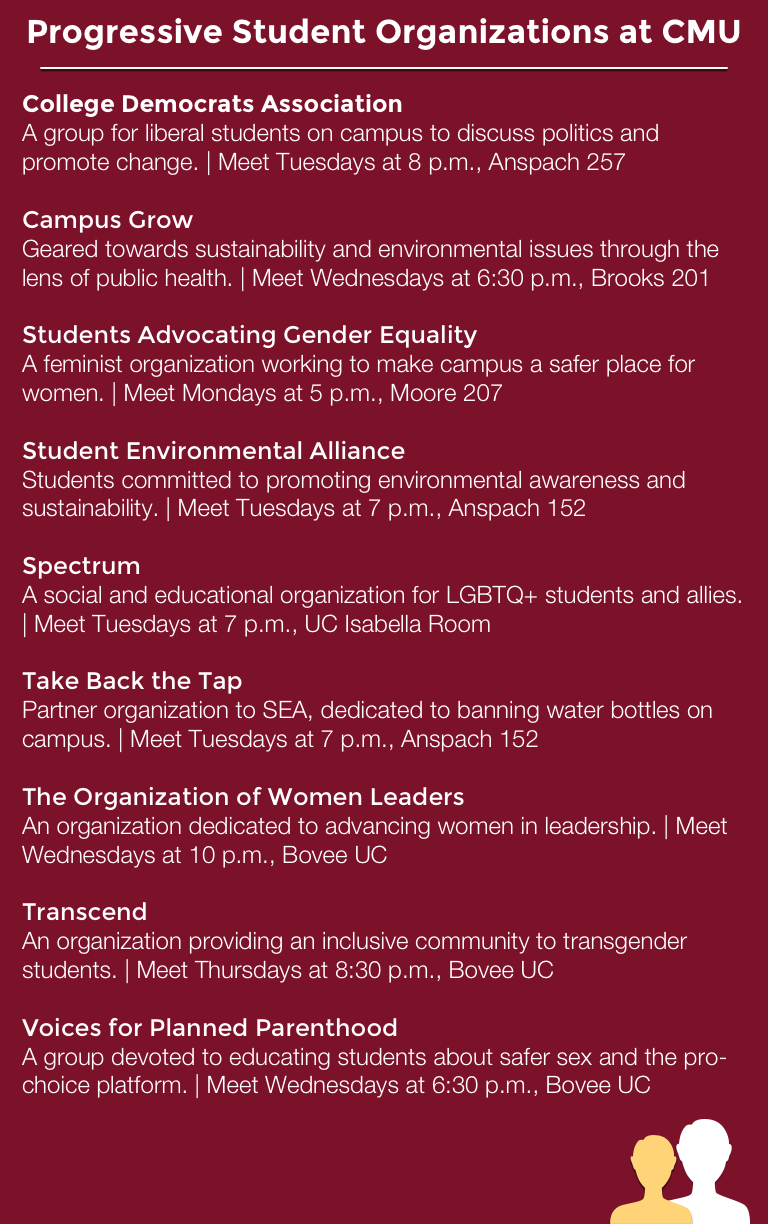 Story and Graphic by Elizabeth Benson

When Central Michigan University sociology faculty member Jon Arlt set out to create a progressive coalition of student leaders, he certainly had his work cut out for him.

Creating Central Michigan Action
Arlt’s goal was to bring these students together to form an alliance and allow student leaders with similar backgrounds to work together on joint campaigns and initiatives around campus and across the state.

CMA won’t be the typical student organization, however. Instead, Arlt hopes that representatives from each of these related groups on campus will form a coalition where they can network with each other, as well as learn new and effective ways of leadership and organization.

“They won’t go to meetings every week; it would not be in our best interest to get 20 student leaders in a room together to have a meeting every single week for an hour because that’s 20 hours of work that could be done,” Arlt said.

He hopes to reinvent the wheel when it comes to student activism on campus. A major issue identified with many such progressive groups is the lack of follow through when faced with defeat.

“If you make the end goal everything your campaign is about, then win or lose, when the campaign ends, you’re done. All those resources, all those contacts, all that faith that you built is for nothing,” Arlt said.

Actions with Issues in Mind
That’s why CMA’s goal is to be issue-driven in all of their campaigns. The plan, Arlt said, is to make sure that, win or lose, when their campaign is over, they pivot towards the issues and make sure to put their resources and contacts to good use.

The first issue on their agenda – voter registration.

While several groups are implementing voter registration drives across campus and in the community, Arlt said, other members are working behind the scenes to shift into campaign mode after Oct. 11. This way, instead of having one overtaxed executive board of students working on all aspects of a campaign, they will have a few students working to coordinate one side of it, and others ready to take the lead when the time comes.

CMA Beyond CMU
In addition to encouraging inter-group collaboration, Arlt hopes to bring the knowledge and wisdom of leaders and activists from outside the university to these students.

“I want leadership opportunities for students that I didn’t have that I would have loved to have. And I want people to get to have what I had, this dramatic, powerful, hopeful, life-changing experience, and I want CMU to be a safer place,” he said.

For Arlt, that dramatic, powerful, hopeful, life-changing moment came this past spring in the form of Bernie Sanders’ presidential campaign.

Teaching sociology and social problems for years had taken its toll on his once youthful optimism, Arlt said. He became jaded and disenfranchised, feeling hopeless about the state of society’s problems and the seeming lack of solutions.

Once he began working with Sanders’ campaign and helping similar student organizations, he saw a dramatic change take place in his own outlook.

“It wasn’t that I came to believe that there was hope and that translated into action, it’s that I took action and that’s what gave me hope.”

Therein lies the main goal of his new endeavor – allowing students their own forum to take action and find hope.

“You can’t give someone hope, because that’s temporary and ephemeral. For us to really own that, it has to be something that we cultivate ourselves.” Arlt said. “So on an ideological level, we are providing a space for people [to] find their own voice and find their own power.”

What’s Next for CMA
As for the future of the organization, Arlt said, the sky’s the limit.

“I see our group being part of a network of similar umbrella groups in towns and counties and campuses across the state and across the country.”

Student members of the fledgling group are just as passionate as Arlt.

“I’ve always wanted to see a strong coalition of activists and progressive groups. It’s tough to work for social change when there isn’t much of a support network there,” said Lexi Achterhof, Petoskey senior and founding member of Central Michigan Action.

A group of this magnitude is unprecedented on CMU’s campus, and would certainly represent new challenges and opportunities for everyone involved.

CMA is a really unique opportunity for passionate, progressive students from all areas of campus to come together and work toward a common goal. I’m especially excited to see what this group can do,” said Waterford junior Autumn Gairaud.

While political change is at the forefront of the group’s platform, the undeniable community surrounding their cause may be even stronger.

“It means a lot to me that this network is getting started and involves so many people from around the state – there are so many great things that will happen and so many good relationships formed,” Achterhof said.