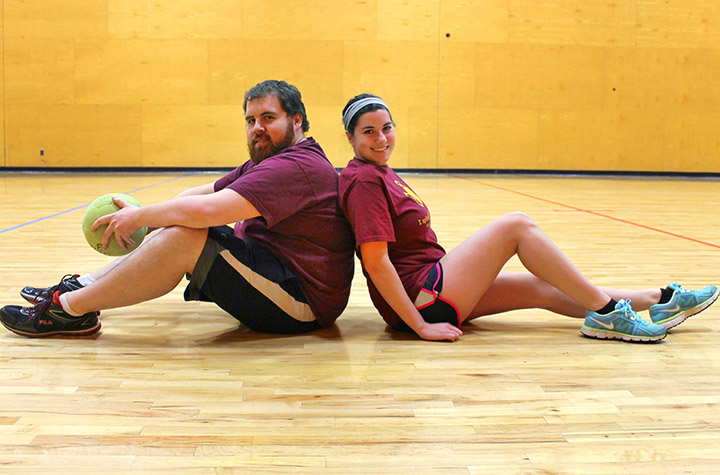 When the clock struck 10 p.m. on Monday nights earlier in the semester, the members of “Bad Wolf FC” weren’t studying for the next week’s exam. They were playing indoor soccer at the Student Activity Center.

Graduate student and team captain Dylan Clauson said the team name is a reference to the British sci-fi show “Doctor Who.” The Lansing native said he started playing soccer when he was in kindergarten.

Senior Lauren Showers said she enjoys playing soccer strictly for fun. The Grand Haven native said she isn’t concerned with winning or being the better team.

“It’s different because I’m more of a very laid back person and I like to just have fun, where some people on the team are more of ‘oh my gosh, we need to win’ and they get really stressed out about things” Showers said.

Not one member of the team has played the sport in the past four years. Clauson said most of the players on the team are upperclassmen that played in high school. Clauson chose to start a team because he wanted work out more and get in shape while avoiding the gym.

“I get bored really easily at the gym so I thought this would be a really cool way to get a workout but also have fun so it doesn’t get boring,” Clauson said.

He enjoys seeing the different mix of players on the others team and adapting to the different play styles on the fly, due to having no game film to watch.

“One week, we would be up against a team and four of their five people would all come up and attack,” Clauson said. “Then, another week they would only send two people forward.”

Though the team ended its season with a final record of 1-3, Clauson is proud of the team’s hard-fought victory.

Clauson said the game his team won was his best game and personal highlight of the season. It was the first game where the team came up with a strategy opposed to not having a game plan beforehand.

“We won our second game by one point,” Clauson said. “That was probably one of the more fun games we had, too. It was very intense and very back and forth opposed to us just being destroyed. So it was a lot of fun.”

The team has come a long way from starting off with no team chemistry to forming new friendships among teammates.

When the team came together, Clauson said half of the team were his friends, while the other half were friends of friends. Due to that lack of familiarity, Clauson said there was no cohesion in the beginning of the season.

But after playing three weeks, the team was nominated for “Team of the Week” for their sportsmanship.

Clauson said if he could change anything about the league, he would like to set it up based on the teams’ different skill levels.