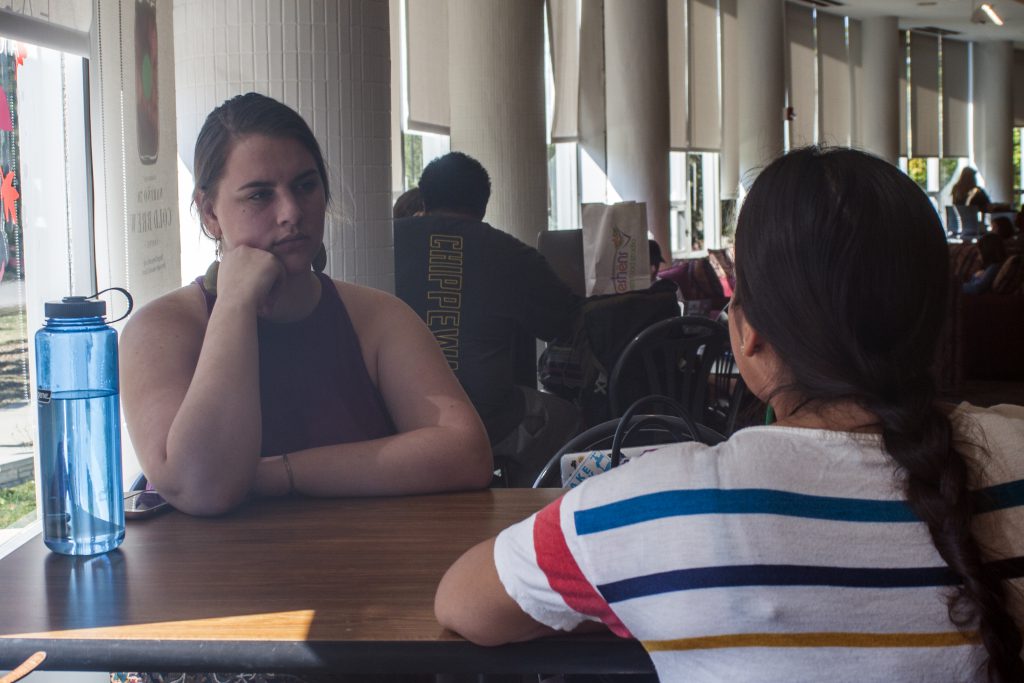 Story and Photos by Clarissa Kell

The Organization of Women Leaders, also known as OWLs, have a new president this year: the woman in charge is Ashleigh Laho.

Laho, a junior from Wyandotte, transferred to CMU just last year and instantly got involved on campus. One of the organizations she threw herself into and thus found her true calling in was OWLs.

“This year specifically, I really want to focus on educating our members,” Laho said. “I want OWLs to be a place to grow, in their feminism, in their activism and just as a person overall. We have a lot of new members, a lot of freshman, who don’t really know about intersectionality, they don’t really know that much about feminism but they want to. I think that is great that they took that step to join OWLs. I want it to be a place for people to grow.”

Laho has her very own story of personal growth. She said she wasn’t always a feminist – in fact, she actually didn’t change her perspective until her senior year in high school. Laho said her views were the complete opposite of what they are now, but the class helped her open her mind and grow into the person that now runs OWLs.

She said she tells everyone involved in OWLs that they always assume positive intent, so if somebody has a question and words it in a way that could be offensive, OWLs members take the time to correct them but don’t belittle them for not knowing. Laho said she thinks that is important; that giving people the benefit of the doubt and taking the time to educate people instead of belittling them.

Laho said she will help educate her fellow OWLs through issue educations that take place every week at their meetings.

“For ‘Meet the OWLs’ that took place last week, we did ‘What is Feminism?’ and we watched a video on intersectionality, which OWLs is an intersectional feminist group. So we focus on all the different identities that people have and how that shapes their experiences in the world and how they experience things differently.”

A position of power is nothing new for Laho. She was the assistant to OWLs’ vice president last year, a Residence Hall Assembly representative for Kulhavi Hall and she was and still is involved with Voices for Planned Parenthood.

But just because she is the president of OWLs this year doesn’t mean she isn’t just as involved with other organizations too. Laho is also participating in Alternative Breaks and will be spending her day volunteering in Flint on Sept. 30.

“I signed up for a lot of different things,” Laho said about her first year at CMU. “I just got really involved, I wanted to kind of find my spot here on campus and I really found it in OWLs.”

Elections took place a couple weeks after the Slut Walk, a demonstration against victim blaming in rape culture, that took place last year in the Spring semester. OWLs ran the event and Laho was a huge part in planning and organizing the event.

“That was something I talked about in my speech for elections,” Laho said. “That I had helped plan (the Slut Walk) and I had sat in on E-board meetings.”

Laho became the president of OWLs through her experiences, which also helped her with her internship with Planned Parenthood over the summer.

“Technically, I interned for Planned Parenthood Advocates of Michigan this summer. I did a lot of tabling events in the communities, so my official title was field intern. I was out in the field, I was talking to people all summer. It was amazing.”

Through this experience, Laho said she was able to travel all over Michigan and help educate people on the misconceptions that surround Planned Parenthood. Laho said she wants to intern abroad over the summer with the study abroad opportunities here at CMU and she also plans to intern with Planned Parenthood again. She said it is her dream to work for the organization when she graduates.

“My heart is really in Planned Parenthood and Planned Parenthood Advocates of Michigan so I really hope to work there. So with my program I will be a certified nonprofit professional when I graduate, which a lot of schools across the nation don’t even offer the public/nonprofit administration major, let alone the credential, so that is going to be a really good opportunity for me to have all of this experience. I just want to work somewhere that I can say confidently that I believe in them and their mission.”