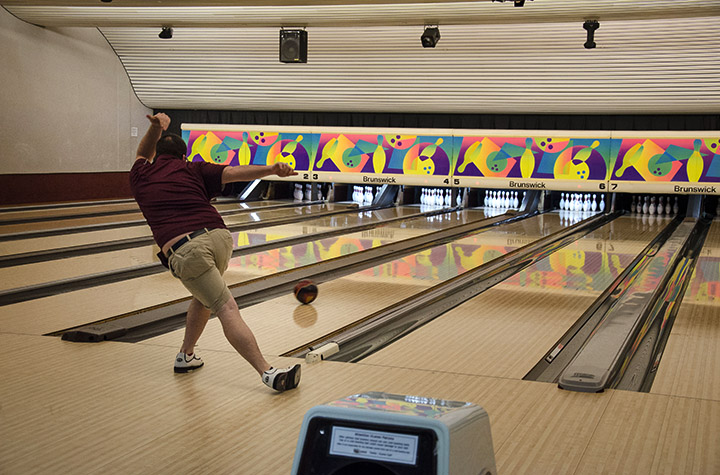 Coming off of two back-to-back intramural sports bowling championships and headed for their third straight is “#Dynasty #Threepeat.”

“#Dynasty #Threepeat” changes its name every year and came up with this name a month before the tournament began. The team is comprised of seniors Jake Acton, Travis Converse, and Kelly Cartner as well as sophomore Cody Rauh.

These four players have quite the bowling background. As Acton puts it, they all grew up bowling. Cartner and Acton actually grew up bowling together.

“Mine and Jake’s dad bowled together and we grew up bowling along with them, too,” Cartner said.

Normally, this is an all men’s bowling league. However, IM director Scott George makes an exception for Kelly.

“I think it’s funny because some of the guys on the other teams will look at me like ‘what is she doing there?’ but I can hang with them,” Cartner said.

Acton, who has been bowling since he was 3 years old, is confident the team will win their third straight championship.

“My family has been doing it for as long as I’ve known, and it is something I’ve always been pretty good at,” Acton said. “I’ve been able to bowl competitively ever since I was really young, which is my favorite aspect of bowling.”

During the season, the team meets and bowls every Tuesday night in the Student Activity Center.

“We bowl once a week outside of here usually, just to stay sharp,” Acton said.

Converse, who has the least bowling experience on his team, has been bowling for approximately seven years. Converse doesn’t let that stop him from enjoying the game and showing up as a threat to the competition.

“Hanging out is probably what I enjoy the most though because it’s just a recreational thing,” Converse said.

Converse said he really hopes to try and get a bunch of people to come out and spectate this season because not many people know about IM bowling.

Carson said he thinks it would be great if people would come out and get hyped. He said he also wants to get more teams to join, so it could be a more competitive IM sport, like floor hockey and basketball.

“It’d be great if people could recognize that we’re here, so we can hopefully get more people to come out and play,” Converse said.

For Acton, it’s fun being able to hangout with his teammates because they don’t get to see each other a lot outside of bowling. As for Rauh, he has been bowling for the past 17 years. Rauh also bowled for Holly high school.

When Converse was injured and unable to play in the finals during their first year as a team, it was Rauh who got to step in and help them win their first championship. He’s been a member of the team ever since.

“I love the competition and the pressure when it comes down to having to make that shot,” Rauh said. “It’s pretty exciting winning back-to-back championships. I have a lot of friends here who are jealous that I have a couple of t-shirts from it.”

When Cartner first came to Central, she was coming off of a great end to her high school bowling career. She finished in the top four in the state, was an all-state bowler, and her team placed eighth in the state. Cartner said she shares her teammates’ confidence about their chances to earn a third consecutive championship.

“I’m confident we will win again this year because we have all been playing together for the past three years,” Cartner said. “We have more fun than anybody else because it’s something that we’ve done for so long.”