“Are you a Librarian? ‘Cause I wanna check you out.'”

Pick-up lines, as cheesy as they may be, are often enjoyed and welcomed, something that Trap Door Improv uses to their advantage by ending their shows with the cheesiest and most sexual jokes in their repertoire. A prominent club on campus, Trap Door Improv puts on shows on campus for free once a month that consist of a series of games, chock full of comedy and laughs. Many of the games they play are similar to the show, ‘Whose Line is it Anyway?’ and they keep the same premise – everything is impromptu.

With a steady record of 11 years on campus and lots of laughs, Trap Door Improv introduced themselves by hosting three shows last Saturday. Luckily, Grand Central was able to sit down with some of the members and get to know them on a more personal level, learning their best jokes and why they got into improvisation.

Alex: I did theatre in high school and I always liked being on stage and making people laugh. I’ve been involved with theatre since the fourth grade.

GC: Tell us your funniest joke.

Alex: Ok, I heard this joke from a 6-year-old boy. Knock Knock!

GC: The mailman who?

Alex: What do you mean who? It’s the mailman. Open the door! 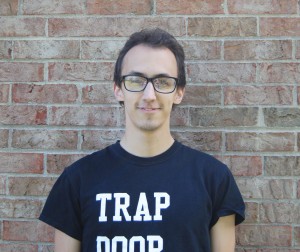 Dylan: I saw the shows and loved them and said ‘that looks like a hell of a lot of fun,’ so I auditioned my sophomore year.

GC: Tell me your funniest joke.

Dylan: What do you do when you get swallowed by an elephant?

Dylan: You jump up and down till you’re pooped out. That joke actually comes from the Captain Underpants books. 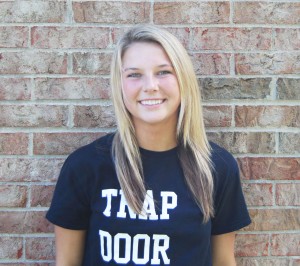 Christine: My freshman year I came to the shows and fell in love with it, so I auditioned. It’s a really good break from school and they are really cool people.

GC: Tell me your funniest joke.

Christine: James Bond and a chicken walk into a bar. The chicken says, “What’s your name?” He says, “Bond. James Bond. And yours?” “Ken. Chick-ken.”