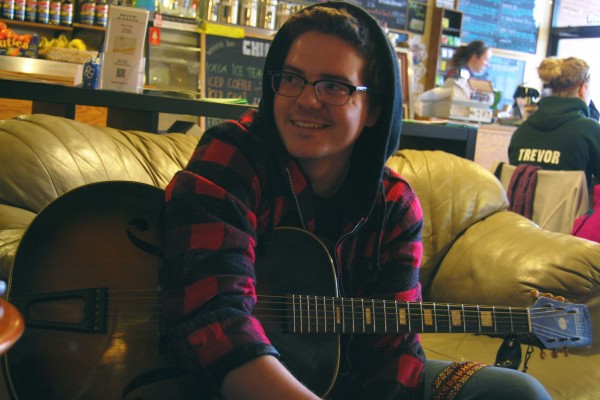 For some musicians, their interest sparks from an older brother or from other inspirations. For Battle of the Mic contestant Schyler Waltke, it began with Abbey Road and spite.

He was about 8 years old, riding in his dad’s old Ford Toronado when he first heard the song “She’s So Heavy” by The Beatles.

“I just remember how soulful that song was,” he said. “I just wanted to be able to do that.”

From then on Waltke began taking music more seriously, even when his father seriously discouraged him. This was only fuel to the fire, and he continued on to play with fervor.

“I was all angsty there for a minute,” he said.

His original motivation was spite and a desire to prove himself. He has since become a passionate writer and guitar player.

In a society where becoming a musician isn’t the most praised profession, Waltke has to find a way to prove that he is doing this for real — he’s serious about this and proves it by playing as many shows as possible.  For now, he’s mostly sticking with the coffee shop vibe rather than more large-scale performances.

“I like a show that’s a lot more intimate,” he said.

The smaller performances display Waltke’s talent better, though. It’s much easier to tell when he plays that it really takes something out of him.

“After I’m done I have to stop for a second, it’s like it’s not real life,” he said. “It’s just as good of an escape as any drug; it doesn’t seem real when I’m playing.”

Music for him is an escape — something that he looks forward to — and writing it is something that has consumed a good portion of his life lately. Waltke said he would spend weeks in his room just writing his music and songs, missing classes and doing nothing but writing.

“My roommate would have to come make sure that I was still alive,” he said.

Waltke tries to write things that make people think, and also about bad luck with the ladies. He talked about how he feels a lot of music is the same, and he would really like to write lyrics just to make people think more.

Writing music is just another art form that he loves. Along with creating music, he paints and most recently has been making his own paper. He got into this because he felt that everything was so manufactured, and this was something that seemed different to him. He enjoys being able to make something that he can use.

His ideal goal is to make it big; he wants to be famous. He realizes the struggles to get there, however, and has learned that the process of becoming a musician is harder than it looks.

Waltke plans to travel to Nashville, Tenn. over spring break to play in the streets and get more experience. He has no plans of stopping anytime soon.