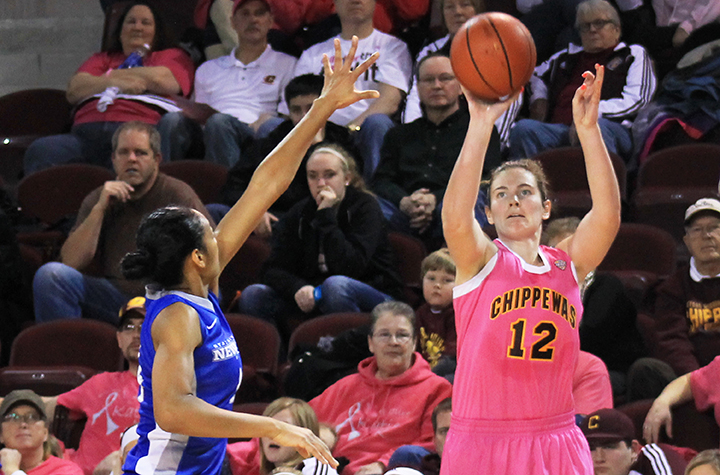 Junior guard Kerby Tamm led her team with a game high 19 points, as she converted five of eight attempts from beyond the arc.

“Everyone has an off game every once in a while, but as a shooter you have to got to keep getting repetitions in and go up with confidence,” Kerby said.  “It feels good to have this type of performance, my teammates really look for me when running transition. They did a job of drawing in the players and I was able to knock down some shots.”

It was a slow start yet again for Central Michigan but the team ended the first half leading with a score of 40-37. In the second half, Buffalo went cold making just three of 15 three-point attempts, while shooting 31.3 percent compared to Central’s 39.4 percent.

Coach Sue Guevara said starting slow has been a recurring theme lately and will need to be addressed if the team wants to win the tournament.

“It’s not about the other team we are playing, it’s how we have to come out and perform,” Guevara said. “The goal is to get to the NCAA tournament, so if we continue to start slow and to play uninspired early, Oklahoma will beat the living tar out of us.”

The difference in the second half for Central was the change to the 2-3 zone defense and not trapping out of it, which allowed the Chippewas to rebound the basketball more effectively, Guevara said.

Guevara said she was thankful for Tamm’s three-point shooting and her confidence from beyond the arc.

“She shot it with some confidence today and that’s what we need her to do,” Guevara said.

Central Michigan will play against Miami Saturday, Feb. 15 at McGuirk Arena at 2 p.m.