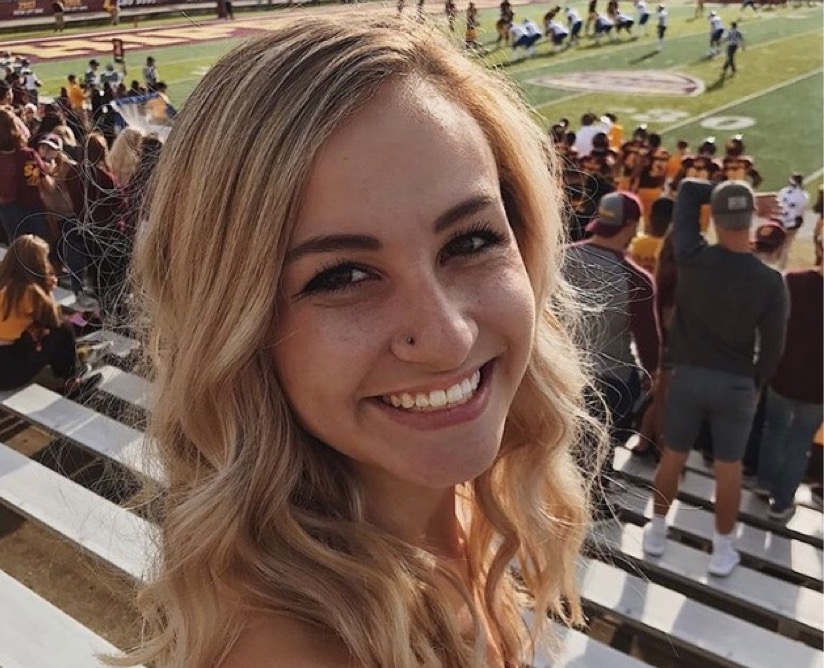 Central Michigan University student Kristen Keyes, an Exercise Science and Kinesiology major from Holland, MI, started dancing when she was 3 years old and has been dancing ever since.

When she started learning, it was all about repetition, learning the same styles over and over again like hip-hop, modern and ballet-based dances.

She knew she loved dance and wanted to continue while she was in college, but she knew that kind of commitment being a part of a team would take. Then, she found the perfect fit.

“I found the University Theatre Dance Company and I thought that it was a really good alternative because they schedule our rehearsals based on our classes,” she said.

Keyes has been a dancer for the University Theatre Dance Company for two years. She has gained more experience with different genres of dance and a refreshing way of telling stories.

“Coming here, I’d never been in a concert before,” Keyes said. “We did more types of modern dancing and dances I’ve never been exposed to; we’re telling different types of stories. It’s a whole new experience doing concert dancing.”

Since she has been dancing for so long, Keyes believes dancing has help her develop into the person she’s become today.

“I was a really shy kid and I didn’t really like to talk to people,” she said. “I  still can’t really do public speaking, it really makes me nervous, but I can get on stage in front of thousands of people and just dance and it doesn’t scare me.”

Dance has helped Keyes connect with herself more, opening up to new experiences and emotion as she told all different kinds of stories on stage.

“As I got older, dancing started to mean something to me because I could actually express meaning to other people,” Keyes said. “I’ve really opened up, especially in college, in expressing myself through dance and just normal life.”

Dancing has even helped Keyes break down barriers with other dancers that may come from completely different backgrounds.

“Dance is so universal, so it’s really cool that even if I meet someone from a different country, even though we don’t speak the same language we connect through dance and I think that’s really cool,” Keyes said.

This connection across difference stretches to other aspects of Keyes life as well, including her involvement with Global Brigades a group described on their website as “an international non-profit that uniquely implements a holistic model to meet a community’s health and economic goals.”

Keyes travelled to Africa on one of these brigades, helping a clinic develop and helping the people that lived in the area over spring break.

With classes in the morning, dance rehearsals every week, and extra-curriculars like Global Brigades, for Keyes, having her schedules in order is incredibly important.

“All I do is I time-manage so I know when I have to dance, when I have class, and what time I have in between to get stuff done,” Keyes said.

Looking to the future, Keyes hopes to combine all her loves for exercise science, kinesiology and dancing into her professional career.

“I’m looking into dance therapy now,” she said. “That way I can incorporate dance into what I’m doing. I’d be helping people do something that we both love to do.”