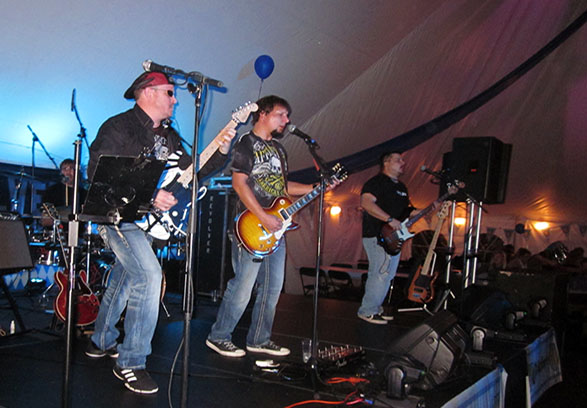 In comparison to the typical Oktoberfest festival in Germany, which lasts over two weeks, Mountain Town’s celebration lasted three evenings.

The beer tent served as a perfect venue for locals to relax and unwind as well as for those passing though.

A group of men on a golf outing visited the tent on Saturday evening to enjoy some beer and relax after a long day on the golf course. Mark Scibiorski, a Canton native, described the atmosphere as, “electric,” and said the music was entertaining.

“It’s a really good cover band,” Scibiorski said of the live band playing in the tent.

Jim Strachan, a metro Detroit resident, was no new patron to Oktoberfest celebrations. Having been to the largest one in North America in Kitchener, Ontario, Strachan noticed the tent was missing some key features of a classic German celebration.

“They’re not playing Oktoberfest music,” he said, “And it’s lacking in German toasts.”

He also said he wished he would have seen some traditional German dancing.

However, the festival did keep up with some of the German traditions. Glass beer-mugs could be purchased, men in lederhosen could be seen, and competitions in bratwurst eating and beer-mug holding were held.

The celebration also offered an assortment of beer, including Golden, IPA, raspberry flavored, and Oktoberfest.

In a season where beer tents grow less common after summer, Mountain Town’s Oktoberfest was a festive celebration that offered a scene different from the norm.

“We came for something out of the regular,” Thomas said. “Friends wanted to check it out and we thought, why not?”

“It seemed like Mountain Town has figured out the best way to do it,” Thomas said.