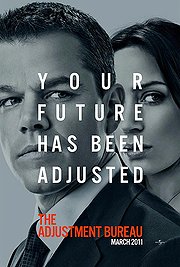 Let’s get it out of the way early: this is the first good studio release of 2011. Right out of the movie purgatory that is January and February comes “The Adjustment Bureau,” a science fiction movie grounded in the real world, playing by its own bogus rules. It’s got the blood of “The Matrix” rushing through it as well as the eerie atmosphere of a Roman Polanski film.

Another thing this movie has are two excellent star turns from its lead actors, Matt Damon and Emily Blunt as David and Elise. As they flee God and his army of “Mad Men“-esque guardian angels (headed by none other than that show’s John Slattery), their blooming romance is totally palpable. Their chemistry together is the movie’s biggest selling point and also one of its key strengths.

First-time feature director George Nolfi is the other big asset, taking his own screenplay from a short story by Philip K. Dick. Nolfi creates a New York City that is luminous, foggy, and has an air of mystery to it. This is key to the story, since the top hat-wearing members of “The Adjustment Bureau” try to stay hidden. Despite their best efforts, David is constantly “going off path.” These men oversee the entire human race, making sure they follow the plan according to their boss, The Chairman (God).

For some reason, David and Elise won’t go on to do great things if they fall in love. He won’t win the Senate seat he’s pining for, and she won’t go on to be one of the best dance choreographers in the world. Richardson (Slattery) tries explaining this to David after the bureau is revealed to him, freezing time and taking him to a secret warehouse to sort things out. He won’t have it, and decides to run like hell from the fate enforcers, hoping the stars will change.

The blatant anti-religious message of “The Adjustment Bureau” is almost stunning coming from a big studio. Nolfi has an eye for both chase scenes and blooming romance, which helps but doesn’t lighten the surprise. It also helps that he doesn’t delve too deeply into the mythology.

He expects the audience to take him at his word that the agents can’t detect David’s thoughts near water, or that they need those fedoras to turn doorways into portals across the city. Preposterous, sure, but he sticks to his guns and follows those guidelines with a sly smirk.

“The Adjustment Bureau” reaches its inevitably predictable conclusion almost without warning. Other than a tedious voice narration at the end, the cliche doesn’t sting too much. Nolfi bends narrative devices to his film’s will rather nicely, creating a fluidity of momentum that pushes it past many of the conventions and corn without too much damage. It helps that he whole-heartedly acknowledges the cheese in some of the story, which helps him defy what should be a predetermined fate and create enjoyable entertainment early in the year.