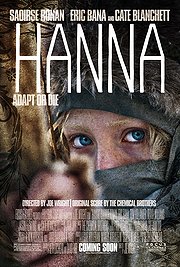 Looking at a DNA report that concludes the subject is “Abnormal,” is probably the last thing a teenager needs to see. Though when said teenager has just finished disposing of a handful of government agents like life were on the “Easy” setting, it may be the least of her worries. Hanna (Saorise Ronan) still looks slightly wounded when looking at that piece of paper. It’s one of the few moments director Joe Wright stops to smell the emotion in this thrilling exercise of kinetic action.

“Hanna” begins in the arctic wilderness, where her father (Eric Bana) has kept and trained her since he went rogue from the CIA. She was bred for tactical assassinations, something he infuses with his own agenda. Hanna is tasked with taking down Marissa (Cate Blanchett) the woman he claims has killed her mother. Wright never lingers in loss or death in this film, putting “Hanna” in constant motion throughout. It is a vision of what last year’s “Kick-Ass” would’ve looked like had the subject been only focused on Hit-Girl and her father.

Wright’s visual sense and his taste in violence is a little more high-brow than that sleazy entertainment, though “Hanna” is above all an entertainment. The casting is perfect, as are the action sequences. Ronan has perhaps the most remarkable young career in the business. She returns to Wright after he kick-started her career with her Oscar-nominated role in “Atonement.” Her wide blue eyes are tools that she’s learned to use to remarkable effect this early in her career. Set against the arctic with the rest of her body covered in dull gray garments, those eyes penetrate the screen and look directly at you.

“Hanna” values a head-on view of its characters. When the movie isn’t pulsating with rhythm it’s often gazing at the secretive people who’d prefer to stay in the shadows. This includes Hanna’s target Marissa, played with villainous relish by the great Cate Blanchett. With a pistol and a menacing smile, she injects a powerful dose of intrigue into the story.

While Hanna is both chasing after and running from Marissa and the rest of government, her origin story takes on odd human elements. She meets her new friend Sophie (Jessica Barden), whose family (headed by a charmingly hippie turn by Olivia Williams) shows her what warmth and affection look like. In a misguided but almost obligatory date sequence with Sophie, Hanna puts a young foreign boy in a vice-grip for trying to kiss her.

The humor sprinkled throughout “Hanna” does not break the fast-paced tone. This movie is not a gritty thought-provoker, nor is it a run-and-gun bloody spectacle. It’s staked somewhere in between, at the crossroads of artful storytelling and commercial appeal. This is a space where many great directors find themselves working these days, and it’s hard to complain when the products they release have the kind of polish and sense of narrative purpose that this one does.

Wright gives visual artistry to the script by Seth Lochhead and David Farr, who craft Hanna’s tale with bountiful references to the Grimm Brothers’ Fairytales. The adrenaline-fueled finale takes place in a surreal-looking, tattered old amusement park filled with a gingerbread house and a roller coaster tunnel with a big, bad wolf’s head. It’s here that we realize Hanna’s age-old story of liberation is staked in fantasy, but still somehow quite real. Until the bloody end of her first assignment, she’d viewed life with a kind of wide-eyed mysticism. She learns better, as most superheroes do… though they usually just do it in flashbacks.