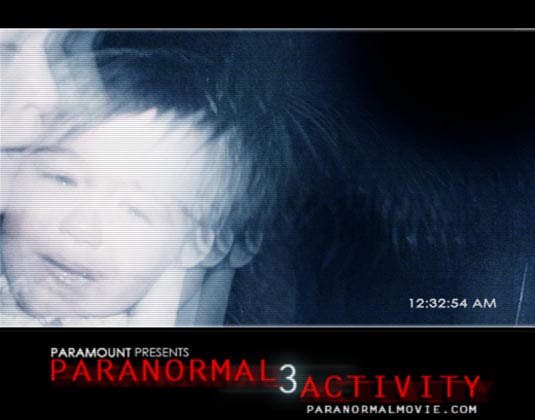 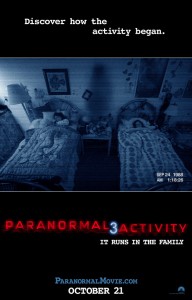 Tickets were sold out to the midnight showing. An hour before show time the stadium seats steadily filled with adrenaline junkies prepared to “Discover how the activity began”—as the poster advertised. The things that go bump in the night are back and America couldn’t wait any longer.

“Paranormal Activity 3,” the third and hopefully last installment of the series, goes back to the beginning. The movie begins in 1988 with a VHS and a younger version of the sisters from the first two films, Katie (Chloe Csengery) and Kristi (Jessica Tyler Brown). The family—consisting of the girls, mother Julie (Lauren Bittner) and mom’s ambitious boyfriend Dennis (Christopher Nicholas Smith)—moves into their new home in California and begin noticing some oddities when Kristi becomes very active with her “imaginary friend” named Toby. To investigate, Dennis sets up a few cameras around the house.

Nothing new, right? Wrong. A key factor to this movie’s tension comes with Dennis’ sloppily constructed rotating camera. The audience visibly clenched every scene the camera was involved in as it slowly pans across the living room and kitchen area. Another new factor that the third film brings is an embodiment of the demonic presence—and I’m not talking about possession.

The demons following the family have a tangible, physical presence in this movie. This is something that possibly spoiled the fun of the series all together. The beauty and the element of fear of the first and second films came as the audience’s imagination ran wild. But add a little dust, a bed sheet and a foolhardy game of Bloody Mary and this film shows you what your fears are made of.

Problems with “Paranormal Activity 3” come with holes in the story’s plot. Technically a pre-prequel, it’s supposed to give the audience answers to how the paranormal activity began and it really doesn’t. In fact, it seems as if the back-story created by the first two are almost ignored. The house never burns down and the reason and origins for the presence is never really explained. If you’re in it for answers you’re out of luck. If you’re in it because the trailer got you amped up, you’re also out of luck. About 70 percent of it is nonexistent in the movie.

After the astronomical success of the first installment of “Paranormal Activity” (a film that cost about $15,000 to make) movie producers everywhere began licking their chops in hopes to take a swing at the formula. The third has an unreleased budget thus far but the second reportedly cost approximately $2.75 million. With a larger pocketbook and a third set of directors (Henry Joost and Ariel Schulman), the third movie has that formula down to a tee.

They knew exactly what audiences were expecting from them—loud noises and sudden movements. And they delivered. Borderline mocking the tension the movies are notorious for, “Paranormal Activity 3” throws numerous cheap scares towards the audience. But in a theater filled to capacity, screams are screams just the same.