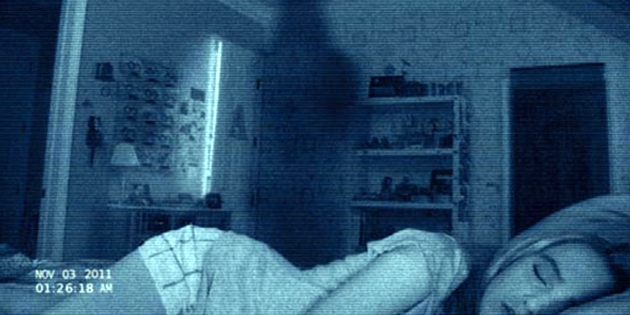 It was difficult to conceive that “Paranormal Activity 4” didn’t have all of its viewers eyeing the exits.

Whether it was to further laugh at the movie’s comedic “horror” moments or to fulfill some sense of curiosity when the movie concluded, people remained seated. Unfortunately, most were probably dissatisfied in their attempts to fill either void.

The plot first revolves around Robbie, a peculiar young boy who is too mature for his age. It seems he is harboring ill-intentions and a secret he refuses to disclose as he takes shelter with the neighbors across the street, citing a bad environment in his current home. (His mother is Katie, who is possessed by the demon.)

Of course, it is all recorded on camera by a family obsessed with documenting their daily lives. For the first hour, the usual tactics are on full display, with doors mysteriously opening and sudden loud sounds or ghostly images appearing. Denial is a recurring theme throughout as the family brushes off “demonic” happenings. The movie even makes a petty nod to “Poltergeist” when Alex’s little brother interacts with a TV used by the demon to communicate.

The “Paranormal” series has always made use of clever marketing. The first movie, sporting the tagline “Don’t see it alone,” paired with a spooky trailer, brought in $193 million worldwide — a monster success considering the film’s estimated budget was a mere $15,000.

In “Paranormal Activity 2,” viewers were threatened with “Nothing can prepare you for what’s next.” It raked in more than $177 million worldwide on a higher but still frugal $3 million investment. But as sequels go, the movie proved viewers could be prepared for what was next, and profit has declined with each new addition to the series (“Paranormal 3” dropped to a $104 million gross).

The fourth installment makes yet another anxiety-stirring claim with “All the activity has lead to this …” and if this is indeed what it has led to, viewers — and more importantly the makers of the movies — should have axed the series long ago when all creative ideas had been exhausted.

In fact, the series of four could have been condensed into two mostly less than exciting features. But would it really matter?

The milking of horror movies via sequels and prequels is not a modern phenomenon. Still, viewers hand over their money to see favorites redone in hopes of gaining a new thrill and a rejuvenated adrenaline rush. After watching a few of the original’s successors — especially in the “Paranormal” series — the usual scare tactics and cues become a formula of repetition and cliché. One need only watch the trailer to conveniently sum up the film’s redundancy.

After all, how many demonic images and poltergeist-like occurrences does it take to dilute an already drab storyline?

If tempted by the film’s marketing, viewers should wait for “Paranormal Activity 4” to be released on DVD or Netflix and fast-forward to the final scene.

Or better yet, save your money and watch the trailer.