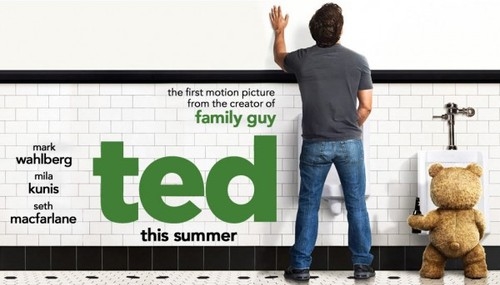 From writer and director Seth MacFarlane comes a story about a stuffed bear that comes to life after a childhood wish. John Bennett, an outcast young boy played by Mark Wahlberg, and Ted, a lovable stuffed bear, become inseparable as they grow older together. They go everywhere together, laugh and share stories and experiences, forming a special bond that matures all the way until Bennett reaches his mid 30s.

Oh and they smoke plenty of marijuana on a daily basis, do cocaine with Sam Jones (the actor who played Flash Gordon) and obliterate a hotel room during a fight in a rocky time in their relationship.

The film begins with a few subtle laughs when the narrator is introducing the story and continues to thrive on the raunchy, did-he-just-say-what-I-thought-he-said, sense of humor seen most notably in MacFarlane’s “Family Guy” TV series. Racist one-liners, offensive and dirty jokes, and an abundance of witty satire highlight the movie’s laugh factor.

One would think that this alone is a suitable starting point for a movie, especially when considering this is MacFarlane’s first attempt at the big screen. The fact is the relationship between John (Mark Wahlberg) and his girlfriend Lori (Mila Kunis) of four years is at a “delicate” point as John puts it, and Ted must move out of the apartment they share. Thus, Ted — the source of the movie’s comedy and allure — is also the root of the conflict between John and girlfriend Lori.

The movie shines in this unique and edgy humor, but offers the same overused plot seen in a romantic comedy that we’ve all come to know and for some reason find satisfaction in: Two lovers are living happily until a conflict arises, acting to tear the two apart. We hope they can resolve their differences at the height of the dispute — and they always do — and the movie ends with a compromise and the lovers are reunited. Viewers know what to expect, yet if done correctly, the movie does not fail to satisfy. The concept is as commonplace as a sports bar; it’s relatable, fun-loving and simplistic. It’s entertaining and docile.

But it takes a lot of compromise for John, who must prove he can cease submitting to the pot smoking and loose living of his best buddy Ted. He knows he ought to be more serious with his career and more importantly with his girlfriend, but blows most of his chances and as a result is forced to disband from his furry counterpart.

Underneath the original plot brews an elaborate subplot when a creepy father and equally disturbed son initiate a hunt for Ted. They’ve been obsessed with the talking stuffed animal for years and must have him. As anyone would guess, the fight to save Ted from the awkward poachers brings together the once lovers (John and Lori), and it is the stuffed bear that is again at the root of the conflict but also the deciding factor in resolution.

Wahlberg quietly proves with quaint precision his strength in acting outside of the usual tough guy drama in playing John, an underachiever unwilling to commit. Paired with Kunis, the duo bring exactly what is needed for both characters to bring a convincing appeal to MacFarlane’s offbeat performance. But this alone is not enough to upset the fact that anyone who has watched the trailers enough to recall the points of humor may be displeased to see that it contains arguably the better punch lines of the movie. There are plenty of funny scenes in the movie that were not shown in the trailer, but unfortunately they feel supplementary to the ones that were.

For all of MacFarlane’s strong satirical criticism and talent in offending potentially anyone, he has adorned a thoughtful insight into intimate relationships between characters with “Ted.” The plot may be generic, but oftentimes a simple proven formula sells. And while it may be true to call MacFarlane’s debut as forgettable as other movies within the genre, at the very least it will be remembered for its exclamation point in humor.