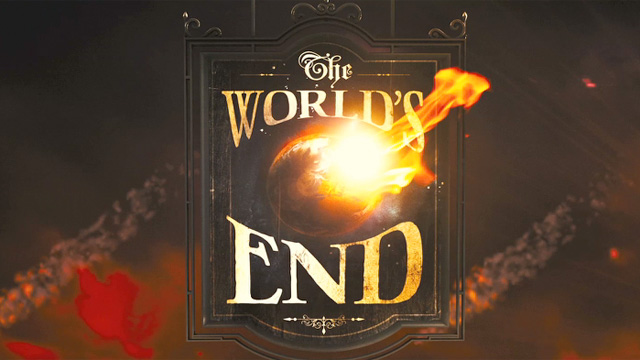 Edgar Wright’s “Cornetto trilogy”—genre riffs that are, at their core, poignant observations of male relationships—comes to a close with “The World’s End,” and it is easily the saddest effort of the three. Indeed, people attending this film, thinking they are getting another rollicking British comedy from Wright, might be surprised at the movie’s pervasively melancholic tone. The cheeky editing transitions are less present and the tone less irreverent than any of his other work. It also might be the most accomplished film the director has made so far, acting as the most crystalline presentation of the themes he has been working with since the beginning of his career.

Simon Pegg plays Gary King, the most tragically narcissistic and wayward character that Wright has conjured up. His conceit stems from an obsession with his legendary reputation as a drinking hero in his hometown of Newton Haven. The main issue with this is that nobody really likes him, and his illusory lifestyle and hard-partying have driven nearly everyone in his life away. He decides on a whim to return to the town and complete the “Golden Mile,” a 12-pub crawl that was attempted years ago by him and his four chums—Oliver (Martin Freeman) Peter (Eddie Marsan), Steven (Paddy Considine), and Andrew (Nick Frost)—all of whom now have jobs and families. Their ultimate goal was to reach the very last bar: The World’s End.

Andrew, now a straight-laced lawyer, was Gary’s best friend growing up, but a terrible accident soured their relationship. The only way Gary can convince him to tag along is through sympathy, and so he tells Andrew that his mother had recently passed away. The antics of Pegg’s character are often quite funny, but nearly all of the humor has a woeful undercurrent to it. This makes almost all of his scenes and interactions feel incredibly pained and awkward. After all, this is a self-destructive, nearly delusional guy that can’t seem to let go of the past, and he will do anything, including lying to his former best friend, to regain some form of glory.

Gary convinces them all to go and take on the “Golden Mile,” even though none of them remain convinced of their friend’s sincerity. The larger issue happens to be that the town of Newton Haven, lo and behold, is actually filled with aliens. The guys decide to continue on with the journey to The World’s End to avoid getting themselves caught and transformed. The science fiction elements of the film, though, are nearly secondary to the drama on display. When the aliens do show up, it is at a point where the movie seems to be closing in and all of the friends are completely fed up with Gary. It almost feels relieving to see the characters fighting them instead of each other.

This is where “The World’s End” becomes something very interesting and unexpected: a moving and wise reparation for Gary King. Pegg’s performance in this film is possibly the best of his career—he plays a character that hides his feelings through artifice and nostalgia, and then is later revealed as a broken man with a longing for someone to care. The alien plot is used to deepen Wright’s overarching and emotional truth about being able to let go and move on from your past. If this all sounds like by-the-numbers drama, rest assured that this material is elevated into heavy emotional terrain.

Despite all of the tension, though, the movie is still a lot of fun. When it deviates from the heavier material and into an action comedy, the fight scenes are shot with a surprising clarity and eloquence. Wright’s proficiency in directing these scenes is downright exciting to watch. The aliens seem to offer a kind catharsis for the characters where they can literally beat down people (quite competently) from their past and unleash their built-up anger at each other. This provides a lot of the inspired slapstick moments that we’ve come to expect from Pegg and Frost.

The movie loses some of its edge in the very final act with a surreal epilogue that feels a little underwhelming after everything that came before it. Minor issues aside, this is a grand accomplishment from a director that keeps growing, and it will rightly sit with the year’s best. It’s not often that the most mature film showing in theaters has a plot involving aliens and a giant pub crawl.