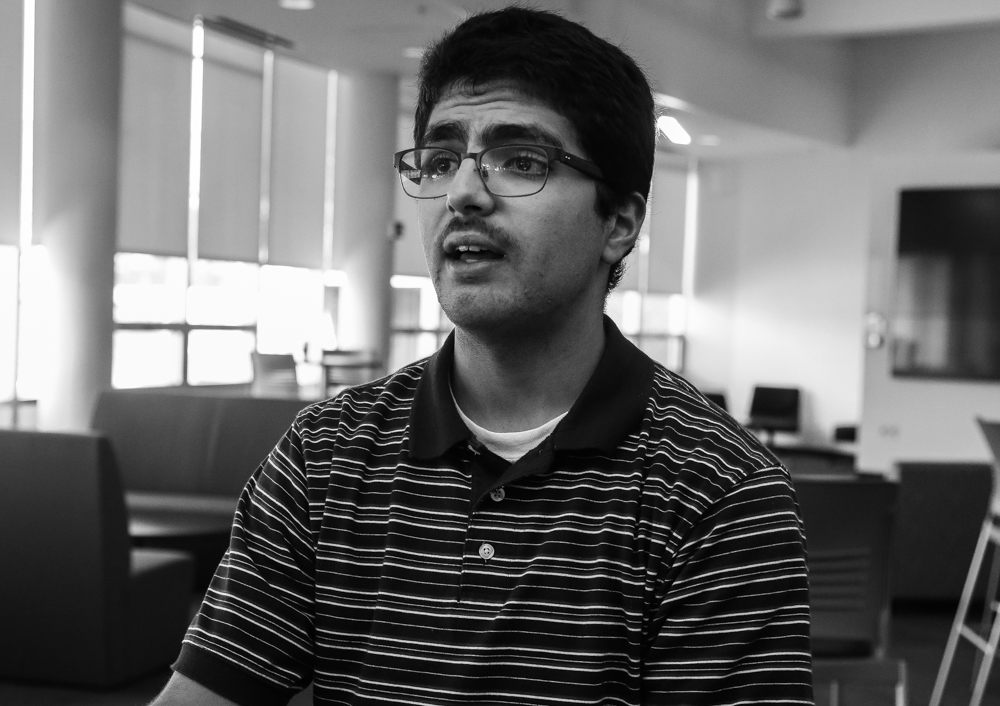 Mariam Saad said she gets a lot of questions about her hijab – about whether she wears it at home or just outside, about why she doesn’t take it off when she’s not around her parents and about whether or not Muslim women are oppressed.

“A lot of friends ask me why I don’t take my scarf off as long as I’m away from my parents and then I will have to explain that my scarf is something I chose to wear. It’s not about family or something that my culture forces over me,” the senior from Lebanon said.

Saad, who studies Communication Disorders and is the president of the International Student Organization and an active member of the Muslim Student Association, has been a part of various panels aimed at addressing the misconceptions about her religion.

This Tuesday, she will be a panelist at a Conversations on Campus event hosted by the Office of Diversity Education and the Office of Institutional Diversity. The event, which will attempt to dispel myths about Muslims, will take place in the Bovee University Center Terrace Rooms at noon-1 p.m.

In addition to asking her about the hijab, people have asked about the socialization between women and men and about how women are treated. Though she’s currently a university student, she said, they’ve also asked her if women are allowed to get an education.

She thinks events such as panel discussions are very important when it comes to dispelling myths about Islam – a lot of times, she thinks, people are afraid of asking questions because they don’t want to be disrespectful. The events allow them to ask any questions they have in an open environment, she said.

“I want people to know that you can’t judge a person by what they look like, so if I’m wearing a hijab, that doesn’t mean you cannot talk to me or you should build a distance,” she said. “I urge people to ask questions: ask and ask and ask, always always always.”

A Religion, not a Culture
One of the misconceptions people have, Ann Arbor senior Hesham Tanbour said, is that there’s a such thing as “Muslim Culture.”

“There is no such thing as Muslim culture because you accept Islam on the basis that you want to be closer to your maker, your creator, but not in the sense that you’re going to change your lifestyle or the things you like,” said Tanbour, who is the president of the Muslim Student Association.

Muslims come from various places in the world and could be part of different cultures, such as American culture, European culture or African culture, he said.

“When you say ‘Muslim culture,’ there are a lot of cultures in that because you could be from India and be a Muslim, but you like a certain food or speak a certain language or have certain hobbies,” he said. “You can’t leave those behind. You still have to engage in your culture. If you’re an American and there’s certain things you like to do like go to football games or travel the world or watch reality TV, as long as it doesn’t go against your religion, you have to stick to that.”

“[I want people to understand] it’s a religion. And it’s what I chose to believe in,” she said. “It’s a faith. It has nothing to do with who I am as a person so if I’m a bad person, that doesn’t mean my religion is bad, it means that I’m a bad person and if I’m a good person, it means that I’m actually working by my religion’s rules, which pushes us to be good people.”

Other Common Misconceptions about Islam
Saad said there’s a long list of misconceptions people have about Muslims. Though she said she could come up with many more, the main misconceptions she could think of were that women are oppressed, that Muslims think violence is a solution, that they don’t have a regular social life and that the hijab is forced upon them.

“People ask us about our prayers, like our rituals and what we do in them. They ask us about the socialization between women and men and how women are treated by men. Of course they ask us tons of questions about what’s going on in the world and if ISIS represents us – it doesn’t, of course,” Saad said.

Tanbour said one of the biggest misconceptions is that Muslims live life in a way that’s completely different from other people.

“Muslims on campus or people who live in America who are Muslim, they live their lives just like any other American would,” he said. “And I don’t mean that they go buy groceries and watch TV and that kind of stuff – that’s something that everybody does. But I mean along the lines of having fun, building relationships and socializing. Yes, our standards may be a little bit different and we might have different boundaries, but we still have the same goals and we still want to live the same lifestyle while still adhering to some of our rules.”

Where The Misconceptions Come From
Saad said she thinks the media plays a big role in people’s misconceptions about Islam.

“News and sometimes social media – no, not sometimes – it’s always a factor in spreading a wrong message,” she said. “You can modify a picture the way you want it, you can caption it the way you want it, so if someone wants to spread a misconception, they will do it very easily and people will often believe this. I can see that very easily; people usually believe whatever they see. They don’t ask questions. They don’t investigate beyond what they hear.”

A Respectful, but Distant Campus Environment
Saad said she hasn’t had a negative experience on campus because of her religion – students are respectful and not offensive, she said, but they also tend to be distant.

The distance between Muslims and other students at Central Michigan University was clear to her when she came to CMU, especially because in her country, there are many different religions and people don’t feel like they can’t talk to someone because of their religion, she said.

“When I got here, of course I felt homesick and it took me time to adapt. But then people [were] really nice and they were welcoming,” Saad said. “Even though I heard a lot of things about discrimination and Islamophobia when I was home, when I came here I didn’t see any of that, so this helped me. Then I got involved with so many organizations and so many events so I liked [CMU].”

MSA is working on involving Muslim students on campus and trying to show that Muslims are regular students, too. At the upcoming football game, Saad said, the group will have a halal tailgate, without alcohol, to have fun and enjoy the game.

“Maybe [other students don’t interact much with Muslim students] just because they’re worried they’re going to cross lines or be offensive and some of them might have some misconceptions, which is kind of understandable because of what’s going on in the world,” Saad said.

Tanbour also feels as though there’s not enough interaction between Muslim students and other students on campus.

“I don’t think there’s enough. And I’m never happy with enough. The more you understand, the more things become transparent and the more questions that are kept inside get answered,” he said.

Saad said Muslim students can also introduce themselves and get more involved on campus.

At the same time, she said other students could make it more comfortable for Muslim students by not creating distance.

“We’re not an enclosed world, we can know about anything if we aim for it so if I have a worry about Muslims or something and I have questions about it, let me go look it up and then I can build a distance or not. It’s a two-way thing,” she said.

How Students Can Learn More
Saad thinks having events and panels where people can ask questions helps clear up the misconceptions people have. Last year, MSA was involved in interfaith talks and presented information about Islam to churches.

“A lot of people, when they came in, had information in their mind that was wrong then came out with a fresh new view about Islam and Muslims and I noticed that after the event, people were asking more questions. They were more comfortable with us,” she said.

Tanbour said people can learn more by looking at unbiased sources, asking questions and coming to MSA meetings, which any student is welcome to attend.

He thinks Muslims and non-Muslims have to meet in the middle.

“[Awareness] comes from communication, like ‘hey, ask me anything, just talk about it, let’s get together, let’s have potlucks, let’s do workshops, let’s become friends, let’s hang out’ and through those interactions, through those conversations with one another, you learn more – from both sides,” he said.

“The more accustomed you become to who we are, you’ll realize really quickly that we’re not that different.”