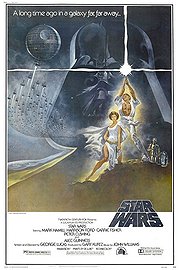 May the fourth be with you!

Star Wars fans across the world are rejoicing (cue Ewok’s victory hymn “Yub Nub”, from “Return of the Jedi”) because of the recent announcement – the Star Wars complete saga will be released in a Blu-Ray box-set, September of this year.

Since the creation of the Star Wars in 1977, fans have enjoyed following the strategic ups and downs of one of the most successful franchises in movie history. George Lucas, the mastermind behind the films’ storyline and direction, has made waiting for this release an interactive experience.

The promotional sub-site for this event has issued an exclusive photo taken from the design of the box-set. The viewing of this photo relies solely on the number of hits the image has received on the site.

In other words – the more fans that attempt to view this image, the more the viewer will zoom out… exposing more of the image (pretty clever, huh?)

According to the site’s tracking charts, the United States is one of the few countries left to fully expose the entire image. (We have been busy with this Usama business… yes, the FBI says Usama.) It’s embarrassing!

If you can hardly wait until September’s release of the Star Wars box-set, get festive by celebrating today’s holiday the right way – refreshing the Star Wars promotional page thousands of times.

For those students still battling the Galactic Empire which is final’s week (and dreaming of a cold one at the Mos Eisley cantina) – May the force be with you… and May the fourth be with you as well.

Never heard of Mos Eisley? This will help you understand half of the jokes in “Robot Chicken”.

The Ewok celebration from Epidsode VI: Return of the Jedi. Adorable.