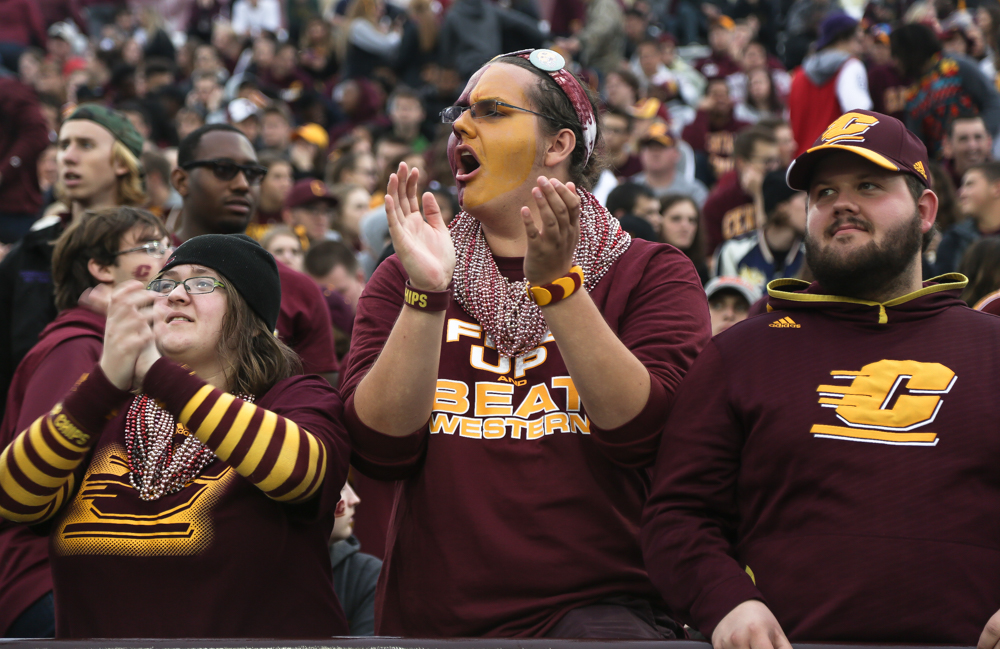 There are a few constants at a Central Michigan University football game.

There’s the sea of maroon and gold everywhere you turn, there’s always someone chanting, “Fire up Chips!” no matter the status of the game, and there’s definitely no shortage of fans in the stadium. However, one of the regular things that’s most uniquely “CMU” is a face that’s painted maroon and gold with a matching wig and loud persona. That face belongs to Central Michigan University senior Nick Gembarski.

Meet the Super Fan
Dubbed “Super Chip” by students and coaches alike, Nick and his fellow super-fan Grant McPherson attend every home football, men’s and women’s basketball, volleyball and baseball games, while also regularly making road trips to rival schools such as Western Michigan University or Eastern Michigan University for away games. While his persona at games is gregarious and spirited, that’s not always the case for Gembarski.

“I never had the spirit I do until I went to college. I was actually the quiet kid in the corner of the classroom, and I was tired of it,” Gembarski said.

“I always thought people that went all out at college games were cool, so I made the drastic change from the quiet-kid-in-the-corner to an obnoxious nightmare for opposing teams.”

However, it wasn’t until his freshman year when Gembarski met former “partners-in-crime” James Jimenez and Shannon Brandon that he truly broke out of that mold.

“James was actually here before me and was known for going all-out at games, so he kind of took me under his wing at first. Shannon and I met our freshman year and she was kind of like me, super-quiet and shy but decided to make a change when she got here. To this day, she credits me for ‘breaking her out of her shell.’”

He Brings the CMU Spirit
Another thing that motivated him the change, he notes, was the lack of extreme spirit among the university’s students.

“I noticed that opposed to other schools, not many people took spirit to the next level here,” Gembarski said. “I thought our athletes deserved that.”

Being a senior, Gembarski has had a lot of time to become recognized as a game-day staple around campus. He doesn’t rely on social media for this, however. Mostly, he says it’s during face-to-face interaction where he gets recognized the most.

“Sometimes in class I’ll get noticed, or just randomly in public, people will come up to me and ask, “aren’t you that guy that paints his face?” So I guess that’s some kind of recognition.”

Despite this, he maintains that his off-the-field personality still is in the same vein as it was pre-college.

“I’m a very laid-back, quiet person in my everyday life, so my personality still doesn’t quite match the fiery, obnoxious personality I have at games.”

However, Gembarski credits his fellow super-fans, friends and the CMU community for making the gap between his personality and persona a little smoother.

“I wouldn’t be what I am today without my friends that love this university as much as I do. We felt right at home in the community of CMU from the moment we got here, and there is nothing we’d rather do than support our Chips.”