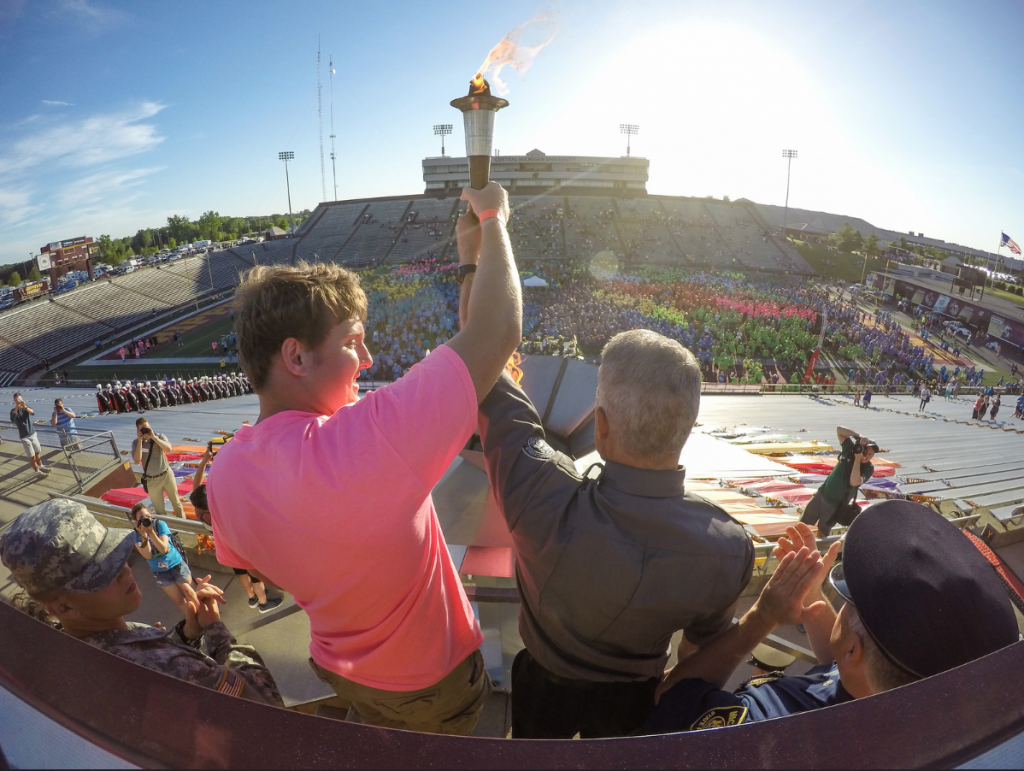 The mission of the Special Olympics is to provide athletic competition for people with various disabilities all year long. Special Olympics promotes inclusion, unity and good sportsmanship.

The Special Olympics Office Michigan is located on campus near Rowe Hall, and is one of only two Special Olympics offices near a college campus, so Central Michigan University has the opportunity to be very involved with the program.

The goals of the organization could not be met without the hard work of volunteers and athletes alike. Meet those involved with Special Olympics at CMU, as well as how to get involved yourself.

With a few of her friends, she organized a pageant in her hometown for girls with special needs and raised around $1,000 for the Special Olympics in the Ottawa and Allegan area. When she arrived at Central Michigan University, she attended the Fall Games for the first time.

“After that, I was hooked,” Rickers said.

Since her first Fall Games during her freshman year, Rickers has attended three Fall Games, two Winter Games, one Summer Games, and many other Special Olympics events throughout Michigan.

One staple of SO College is Unified Sports, where Special Olympics athletes and students play alongside each other in sports such as soccer, flag football and basketball. Central Michigan University was one of the first schools to have a Unified Sports team and now offers five Unified Sports Leagues throughout the year. Students partner up with athletes within their team and practice once a week. Together, the CMU Unified teams go to tournaments against other college teams in Michigan.

Rickers plays Unified kickball and helps out in the planning process of several SO events such as the Polar Plunge and the formation of the Special Olympics LEAD team for the Leadership Institute.

Rickers’ favorite part of the Special Olympics is the people she meets and the positive energy they bring.

“Everyone who’s either an athlete, a coach, a volunteer or a staff member is so genuine and inspirational. The athletes are the kindest and most selfless people, and being around their positive energy is contagious,” Rickers said.

“These outstanding people change how you view the world and view others,” she said.

Samantha Buckmaster has been an athlete for the Special Olympics since she was 10 years old. At age 21, she still plays soccer and loves every minute of the game.

Buckmaster is the youngest on her local soccer team, and usually plays defense and forward positions. All of her teammates are her friends, and they have been playing together for years.

“They are my role models because they helped me out at my first time at soccer,” Buckmaster said.

In fact, when Buckmaster first started playing, her mother, Marilyn, was nervous due to her small size in relation to the others. Her teammates reassured her that Buckmaster would be well looked after.

Special Olympics teams are co-ed and age inclusive – they can include men and women from 8-years-old and up. She loves soccer and hopes to continue playing year after year.

“It’s fun and we try our best to win each game,” Buckmaster said.

Buckmaster was excited to go back to the Fall Games the weekend of Sept. 23-25. Her favorite part about the Games? The dances. She enjoys getting all dressed up and dancing with all her friends.

When not playing sports, Buckmaster enjoys listening to music and doing crafts. Her main crafts include making jewelry and coloring. She also loves camping, traveling and playing beach volleyball with her siblings.

Buckmaster attends Kinney School in Mount Pleasant where she’s improving her skills to live independently and work at a job. In the afternoon class, she works at an ice arena where she does custodial work. Buckmaster’s dream jobs are to work at a daycare program, at Disney or with dolphins.

If you can’t make it to the 5K, SO College participates in many other events throughout the year such as the Polar Plunge in February and various state games across Michigan. The organization’s meetings are every other Monday in Anspach 306, with the next meeting taking place Oct. 10 at 7 p.m.