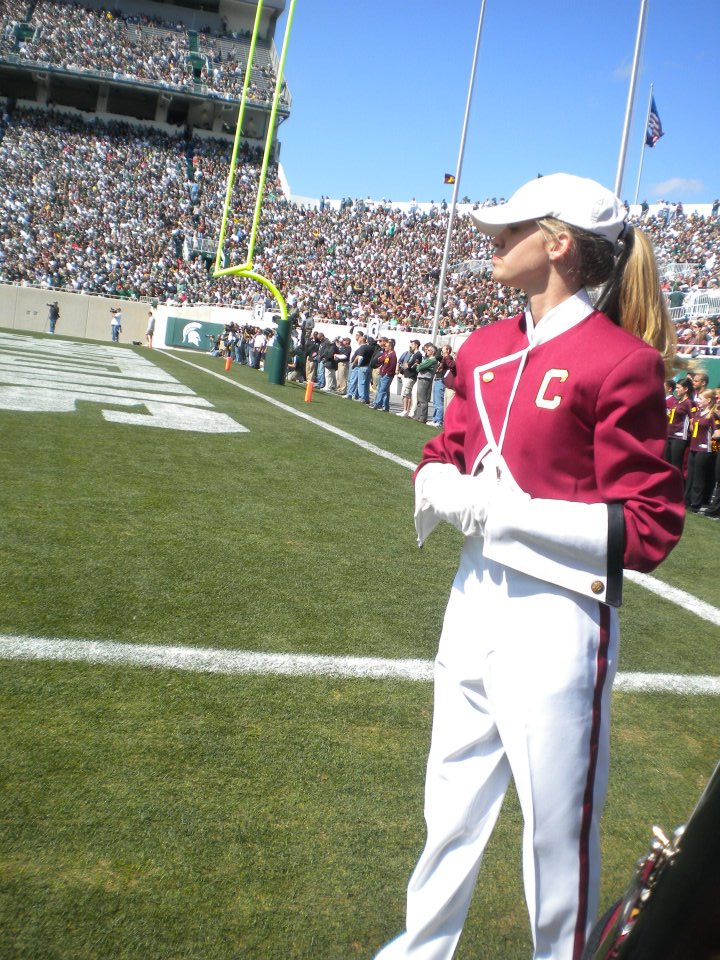 Scottville junior Julie Claveau, like many other Central Michigan University students, enjoys unwinding with a good book, drinking tea or catching up on the day’s news.  However, the term “busy” for Claveau is quite different than that of the average Chippewa.

While taking 19 credits this semester, staying actively involved in many music organizations on campus and holding down a job in the writing center, Claveau is in her last year as assistant drum major for the Chippewa Marching Band. She will soon begin the transition to head drum major.

Becoming the head drum major is a four-year position in which one serves as assistant for two years and then moves into the head position for the last two.

“So, I’ll be the woman up front, doing the strut,” Claveau said. “It was the first thing that I got involved in and I absolutely love it … I wish it were a major.”

Along with her time on the football field marching, Claveau is a part of Kappa Kappa Psi, Central Michigan University’s honorary service band fraternity where she plays an active role as the musicianship chair.

“I’m in charge of incorporating and promoting music, the School of Music, and all of the university bands,” Claveau said.

During the semester, shehosted a Band Composition Competition and Mock Juries, which gives music students an opportunity to practice for their type of a final exam.

Claveau isn’t a stranger to music.  After starting band in 5th grade, she can now play 7-8 different instruments including the clarinet, bass clarinet, string bass and tenor saxophone.

In addition to her passion for singing, she admits that her favorite instrument to play is the string bass.

“People don’t expect it, seeing a little girl like me playing a big string bass,” Claveau said. “I just love how it sets the groove and how it’s really a supportive instrument.”

With majors in early childhood development and learning and elementary education certification, Claveau is also picking up two minors in integrated science and language arts to finish off her degree.  She aspires to graduate with honors and then get field experience to do curriculum for child development centers or begin teaching in elementary schools.

“I know I want to work with little kids and music, and after seeing how music impacts children with autism and different social/emotional issues, I’d definitely like to go to grad school for that,” Claveau said.

Claveau was inspired to continue to follow her dreams in music after her middle school band teacher urged her to attend Blue Lake Fine Arts Summer Camp because she thought Claveau had the potential to do great things. After raising enough money to attend, Claveau continued to go back for the next four summers.

“It just opened my eyes to see that there are other people just as passionate about music as me and so I stuck with it,” Claveau said. “Music is a universal language, so I think it speaks to a lot of people.”

Going on from middle school band, Claveau played in the concert and jazz bands at Mason County Central High School as well as singing in the choir. Now, she dedicates most of her time to the marching and concert band at CMU.

“It’s just the feeling of it and how you can express your emotions through music, and the fellowship that comes with it,” Claveau said. “I like being around those people that have the same feelings as I do when we’re around music.”