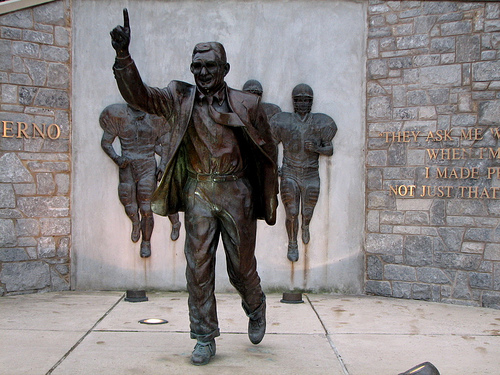 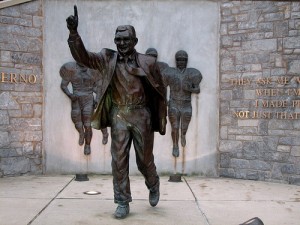 Joe Paterno was the epitome of what college football stands for. After the legendary coach of Pennsylvania State University died Sunday at 85, his remembrance by many is still very much a grey area.

Paterno’s coaching career, from 1966 through 2011, saw him become the winningest college football coach in history during his 46 consecutive years of coaching. During his tenure at Penn State, he amassed 401 wins, with a 74.7 winning percentage, while only accruing five losing seasons during that period.

Paterno also excelled at developing the academic talents of his athletes and helping them to realize their maximum potential after their football days were over. While Paterno was head coach at Penn State, the program had an 89 percent graduation rate amongst its players, one of the best rates in the nation. Paterno was a humble coach who never sought recognition for his own successes, but instead chose to measure success by grooming productive citizens — not just good football players.

In life, Paterno became as much a part of Penn State as Penn State was a part of him. He was a well known, highly respected individual by peers and students alike, frequently taking the field to chants of “Joe-Pa!”

He gained immense respect from his players, often becoming somewhat of a father figure.

“He was a father, a husband, and I consider him a friend,” Penn State quarterback Matt McGloin said. “He is really the only person who gave me an opportunity to play football. I will never forget him for that.”

Preaching hard work, competition and toughness, Paterno built a program in his image. Sticking to old wisdom and fundamentals, Paterno resisted the ever-evolving nature of college football and did not change his leadership style. Even as he aged, Paterno commanded the respect of the young men he coached and turned that discipline into wins year in and year out.

In the fall of 2011, the sports world was sent reeling with the news of the Jerry Sandusky sex scandal that enveloped the Penn State football program in a firestorm of media coverage and national clamor. While the act did not involve Paterno directly, he immediately received immense criticism for what was deemed “a failure to act.” While Paterno did report what was told to him to his superiors, he did not proceed with any further course of action — a stance that drew ire from the public while the situation developed.

Soon after the incident, the Penn State board of Trustees voted to swiftly remove Paterno of all coaching duties, effective immediately.

The dismissal of Paterno prompted a huge reaction from the students at the university who marched across campus to protest and chant for the legendary coach to get his job back. Paterno would later release a statement.

“I am disappointed with the Board of Trustees’ decision, but I have to accept it. A tragedy occurred, and we all have to have patience to let the legal process proceed. I appreciate the outpouring of support but want to emphasize that everyone should remain calm and please respect the university, its property and all that we value.”

The board did allow Paterno to remain a tenured member of the Penn State faculty, and discussion about his future was still ongoing when news came of his passing on Sunday to lung cancer.

During his career, Paterno accomplished many things. He created a program built on principles that he firmly believed in to his dying day; a program that was successful and helped him amass a FBS record 401 wins. He became a huge and undeniable part of Penn State University, more than just a football coach, more than a leader — he became a role model and a teacher to many around him. While the Sandusky scandal will be the most recent memory of Paterno, in time it will only be his legacy that he will be remembered for.

Despite the black eye his reputation received from the Sandusky scandal, Paterno is a future hall of fame coach who was a shining role model in the otherwise unstable world of college football. Those who hold critical views of his reaction to the scandal would do well to put themselves in his position, and just try to imagine making a decision with so much weight behind it after factoring in its potential risk to the program he had built from the ground up.

There is no denying that the offenses committed were criminal and should lead to the punishment of all those involved, but for Paterno to have made a hasty decision and possibly report the wrong information could have had consequences just as damaging. As the sports world looks towards a swift resolution to the case against Sandusky, there needs to be appropriate respect towards the passing of a titan in college football, whose demise was no doubt expedited by his sudden removal from the game he loved so much.

Tragically, among the throngs of support and condolences reaching out to the Penn State community and the Paterno family, there are still those who criticize Paterno even in death.

Many seek to show that Paterno willingly and purposefully turned a blind eye to sexual assault and molestation on multiple occasions. The moral attacks in these statements and the blatant lack of tact and timing in their origin are meant to ruin the remembrance of a great man and coach.

Fortunately, many have ignored these attacks and focused on paying their final respects to a great man.