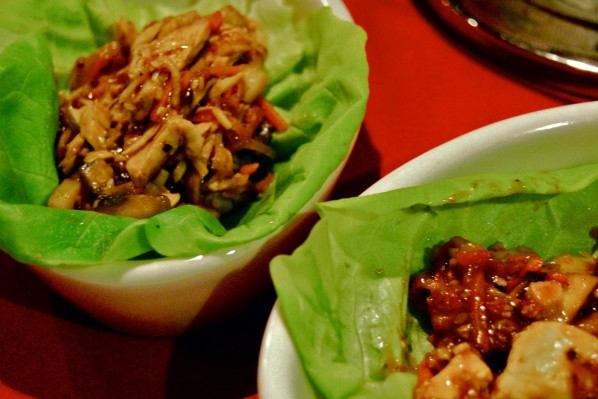 The mood was set with an Asian cuisine, colorful décor and relaxing oriental music.

“The purpose of all of this is to make CMU students more culturally diverse and aware,” said Samantha Adams, student manager at Merrill Residential Restaurant.

Vibrant paper lanterns covered the ceilings, streamers swirled throughout the cafeteria, and the meditative music brought a Zen feel to the atmosphere.

Freshman Spencer Myhala from Chelsea said he looks forward to the themed dinners.

“I love how they have the themed dinners. Not just for Chinese New Year, but also every holiday,” Myhala said.

Myhala’s favorite dish was the lettuce wrap that contained grilled chicken and veggies wrapped up in a leaf of lettuce.

Some of the other foods that were on the menu included wonton soup, hoisin glazed beef short ribs, sweet and sour shrimp and sesame garlic chicken lo mein, which could be topped off with peanuts.

Even though some were enthused when it came to the ethnic cuisine, many students were not as impressed.

“It was very fresh food, however none of it tasted good besides the apple spring roll,” said South Lyon Freshman Stephanie McNeill.

Freshman Ryan Urso from Detroit was not excited about the cuisine either.

“Truthfully I didn’t like the food. I’m not really a big fan of the Chinese food that was being served. Instead I decided to just make myself a sandwich,” he said.

“I was actually a little disappointed with the food lineup,” he said. “The soups were lackluster, however the desserts were fantastic.”

Kazmierski said he would add items to the menu to appeal to more students.

“I would like to offer a little more variety. Adding stir fry and sweet and sour chicken would be nice,” he said.

Though there were mixed reviews when it came to the food, the overall idea of celebrating the Chinese New Year was highly supported. In the near future, the residential restaurants plan to have themed dinners for both Valentines Day on Feb. 14 and Cinco de Mayo at the end of the semester.