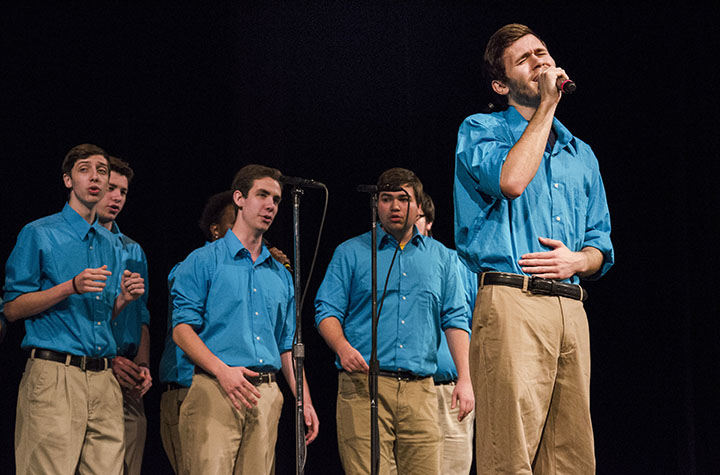 On Thursday night, Central Harmony, On The Rox and Fish ‘N Chips came together and rocked Plachta Auditorium in the first ever Aca-Chips.

Program Board hosted the event and had a full house. The line started at 6 p.m., but the show was not until 7 p.m.

Central Harmony, Central’s co-ed a cappella group, took the stage first and started the show off with a few hits many probably recognized from their childhood: a Disney medley that featured “The Circle Of Life,” “Go The Distance,” and “I’ll Make a Man Out of You.”

“It was absolutely phenomenal,” Claudia Davis, a sophomore from Waterford, Mich said. “I loved the mixture of their voices and the enthusiasm they when they sung the songs. I loved how they incorporated the stuff with Simba.”

The night took a turn into the 1980s with the one-hit wonder “Come On Eileen” by Dexys Midnight Runners. It was upbeat and had the audience swaying to the music.

Central Harmony’s cover of “Somebody to Love” by Queen was powerful and beautiful and showed off their vocal strengths the best. Central Harmony performed two recent hit songs, “Paradise” and “Counting Stars.”

Near the end of Central Harmony’s set, they sang their alumni song “Gummy Bears,” and it was a very entertaining, cute performance.

On The Rox, Central’s all-female a cappella group, were the next act to take the stage. The ladies started with a classic Pat Benatar hit, “Hit Me With Your Best Shot.”

The young ladies also performed “Such Sweet Loving” and “Madness,” two songs that featured a flirtatious side to the group and had the male audience swooning.

Hit songs were also in their repertoire. “Mirrors,” by Justin Timberlake, was one of their stronger performances of the night. It had the entire audience clapping along. Neon Trees’ “Everybody Talks” was also on the set list.

They finished the night with a cover of Pentatonix’s, another famous a capella group, “Love You Long Time.” It was strong and powerful, just like the original.

“I thought it was really cool to see a girl beat box for once,” Davis said. “She was pretty good at it.”

Fish ‘N Chips got the ladies screaming as soon as they walked on stage and opened, appropriately, with “Isn’t She Lovely.” With the mellow melody and vocals, they surely had the ladies in the audience in the palm of their hands.

Landis Smith, a member of the all male a capella group, sang two tracks in a row. His rendition of “Human Nature” was smooth and beautiful. Smith’s performance of Marvin Gaye’s “Let’s Get It On” was sexy and had the crowd going.

“Hallelujah” was, again, performed beautifully and could give anyone goosebumps. “Poison” was very enjoyable to watch, and the group looked like they were having a lot of gun.

The men added a new song to their set with Drake’s “Hold On, We’re Going Home.” Their twist on the song near the bridge really made it unique.

“I was disappointed that they did not perform ‘Ignition,'” Davis said. “But they won me back after singing that song by Drake.”

Fish ‘N Chips brought some alumni to the stage and they performed the well-known classic “Cecilia” by Simon and Garfunkel.

The most memorable moment of the night was all three a cappella groups coming together and singing Pentatonix’s “Run To You.” It was an emotional rendition that was harmonized beautifully.

Aca-Chips was a success and hopefully it is an event that becomes annual for Program Board.

Here is a small clip of the groups singing “Run To You.”