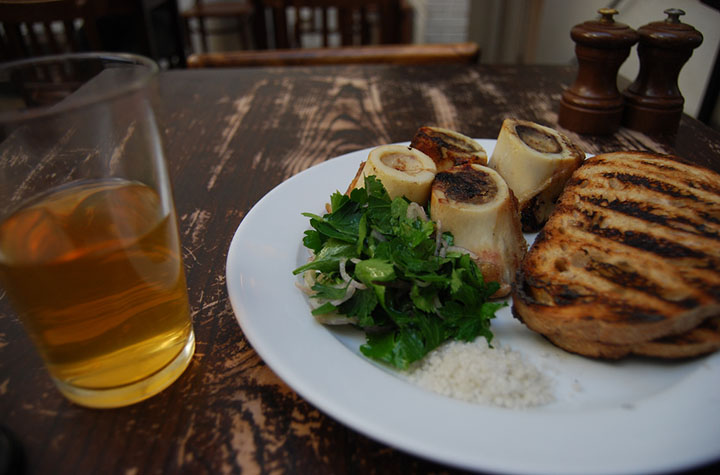 About a year ago, when I sat down at my computer and created a final list of the things I had to do while in London, the first thing that came to my mind wasn’t to see Big Ben, tour Westminster Abbey or even ride the London Eye.

It was to eat bone marrow. My biggest mission was to eat and eat well.

After getting off of a bus ride from Germany lasting nearly 12 hours, I was craving some food that wasn’t entirely composed of sugar or starch. The only things I had on the bus were gummy bears, potato chips, and water.

My first stop after checking in at my hostel was St. John Bar and Restaurant. St. John is a traditional British establishment in Smithfield, a small area of the London. Since it opened in 1994, the bar and restaurant has been featured in magazines and has won numerous awards for its food, which one could categorize as reclaimed traditional British recipes.

I walked into the building alone and sat down at an empty bar. I was surrounded by white walls with chalkboards that displayed the long list of drinks and the bar menu. A kind man took my order, bone marrow and a cider, and my midday meal arrived after just a short wait.

The plate was nothing less than picturesque and the aroma was delightful. I could tell immediately just from the presentation why it is perhaps the most famous bone marrow in London. If Anthony Bourdain raves about this dish, it has to be good.

To begin, I used a long spoon to dig out the marrow from within each of the four small veal bones, then spread it onto a slice of crunchy bread, and topped it with a parsley salad and some extra salt. It is a flavorful bite each time. The marrow is fatty and oily, but also juicy and sweet when mixed with the prepared parsley salad.

From traditional British fish and chips and meat pies in Borough Market to Middle Eastern kebabs and cupcakes from The Hummingbird Bakery, during my one week in England, I tried a range of dishes that were of uncharted territory. Each meal was terrific in its own right, but that roasted bone marrow remains the best dish I had while in London.

The memory of its delectable taste has stuck with me since the moment I left the restaurant. Oh, what I would give to have it again now!