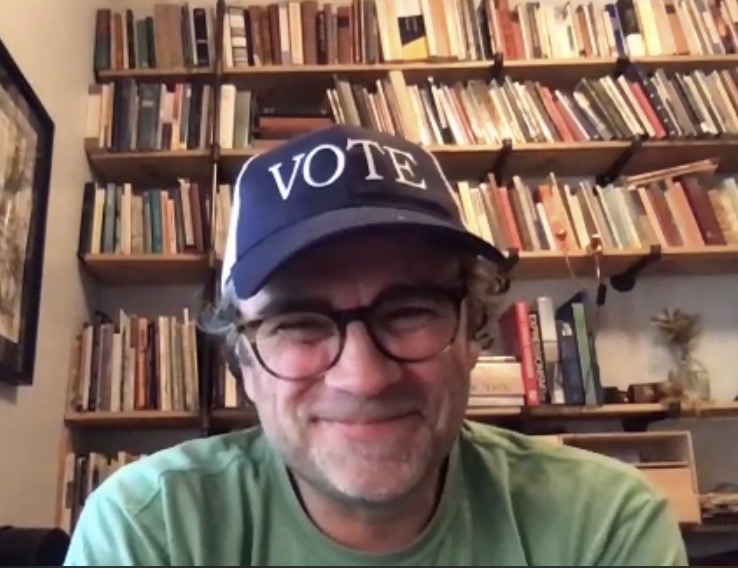 What makes a class so memorable at Central Michigan University are the professors. Not only do they work hard to teach the class, but they love and care for the students.

In the department of English Language and Literature, professor and poet Robert Fanning loves to discuss what he’s most passionate about, and that is poetry.

As a child, he enjoyed reading the rhythms of poetry. He remembers loving classic nursery rhymes and Dr. Seuss. However, it wasn’t until high school when he took a creative writing class that his teacher Don Lytle saw him as a poet.

“He was the first person that told me, ‘You are a poet,’ and it was then that my journey with this art form began,” Fanning said.

Fanning began his college journey at Oakland University and then transferred to the University of Michigan. He graduated from U of M in 1993 with a bachelor of arts degree in English. After a gap year, Fanning decided to go to grad school for his master of fine arts in poetry at Sarah Lawrence College in Bronxville, New York.

“NYC is so vibrant and alive,” Fanning said. “Walking down the street, you’re probably going to pass two or three writers on most blocks. It’s a town filled with artists.”

The poetry that Fanning writes comes from his response to his life or to the world. Over the years, Fanning has published four full-length poetry collections and two chapter books. What’s inspiring about his work is that each book is a collection that was very meaningful at that time in his life.

His most recent book, Severance, is his personal favorite because it was a departure for him stylistically and its content surprised and frightened him. To him, Severance was more like a dream that was sparked by an injury.

“When my kids were little, I took them sledding and I fell and smacked my arm on the ice. My elbow broke through the flesh, but it didn’t actually break,” Fanning said. “I started that book that night. My arm was in a sling and I was typing with one hand.”

Like most poets, there is always a poet in mind that one looks up to for inspiration. That poet is Fanning’s friend, Vievee Francis. Fanning admires her for her bravery and that she’s an inspiration to many.

“Especially as an African-American woman, she has had to really fight not being seen as a woman, as a black woman,” Fanning said. “To write whatever she wants—in an industry that for a long time didn’t want to see her—takes a lot of courage.”

What Fanning loves about teaching at CMU is that the students are open-minded and hardworking. To have students that are willing and excited to learn makes Fanning more passionate about his job.

In 2008, Fanning created the Wellspring Literary Series in which four readings take place annually on the first or second Monday of the month at Art Reach in downtown Mount Pleasant. His goal was to bring Michigan writers to Mount Pleasant and try and make it a hub for Michigan poets. This year is the first time it hasn’t been held due to COVID-19.

During quarantine, Fanning spent a lot of time writing poems in his studio. He mentioned feeling fortunate that he was able to write during the pandemic. The biggest joy of it all was that he got to spend time with his two children and his wife.

As a whole, having a family and being a father is Fanning’s primary happiness in life outside of writing.

“To me, being a husband and a father have been the greatest joys of my life. That’s what has nourished me day-in and day-out,” Fanning said.

In general, poetry is something that people have prejudices about. Some think they shouldn’t bother reading poetry or they think they hate it. Fanning enjoys poetry because its portable, and always inspiring. He loves how he can leave and come back to a poem with no problem, which is more challenging to do when you’re reading a novel.

Unfortunately, in the education system, people usually only learn about a few famous poets such as Robert Frost, Langston Hughes, or Shel Silverstein. People are not aware of the huge array of diverse poetry in the world.

For future writers, Fanning advises them to make time to write. He mentions that in the world, writing is considered a hobby and one is not going to make much money as a poet. With that being said, writers have to love it and love it fiercely.

“I love poetry because it helps us to know ourselves better. Poetry reaches into so many areas of human life,” Fanning said.

Robert Fanning is a wonderful poet and professor. Now in his thirteenth year at CMU, his favorite aspect of teaching—being in the classroom—wasn’t possible this year, but he looks forward to end of the pandemic, when he can once again “be sitting around the great fire of poetry” with his students.