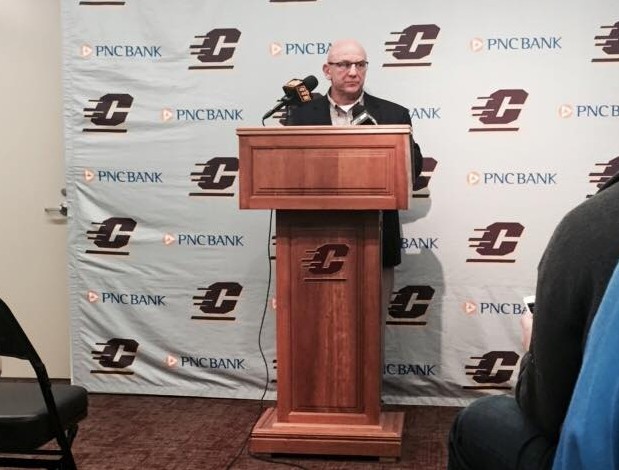 Recruiting was different back in 1999.

That’s the last time Central Michigan head football coach John Bonamego had to hit the recruiting trail. The recruiting game has accelerated a bit, but the Chippewa head coach wasn’t deterred from filling his team’s needs.

“It was a lot of fun,” Bonamego said. “Recruiting has changed, but it has also stayed the same. When I left college football there was no such thing as Hudl. Nobody had film on the internet. When you went out recruiting it was with a suitcase full of maps and several calling cards. Now you got a cell phone, you got a GPS, and you can evaluate kids from your phone.”

Until he became the Chippewa head coach last February, Bonamego had no social media presence. He was quickly informed that he should join Twitter, so he could be followed by potential prospects and send them a message or two.

“I didn’t have a need for Twitter,” he said. “Now if you get a kid to follow you, you can communicate with him on there and get the ball rolling.”

The ways players and coaches communicate may have altered, but connecting with the prospects is what ultimately gets a kid’s John Hancock on Signing Day.

“It’s still a relationship business,” Bonamego said. “It’s still about building a vision. It’s still selling a product. Our staff feels like we have an excellent product to sell. Central Michigan is very near and dear to me. It’s personal. When you believe that strongly in something it’s easy to sell. You’re always trying to create an image in a prospect’s mind of where he fits in, and how he’s going to become a part of our football program.”

The coaching staff has been very aggressive this offseason. They looked for very specific athletes that fit the culture of the program. A lot of the signees had offers from Power Five conferences, so the incoming talent speaks for itself.

“I don’t worry about the ones that don’t come,” he said. “From here on out it’s about the development of the players that are here.”

The Chippewas added depth to their secondary and defensive line, while addressing the quarterback situation. All of the players that verbally committed signed their letters of intent.

Among those signing on is Bailey Edwards, the younger brother of former NFL and University of Michigan receiver Braylon Edwards. Last season he was named First Team All-State by the Detroit Free Press and the Detroit News.

“Bailey’s a long, fast wide receiver who is still growing,” Bonamego said. “He’s got a great combination of length and speed.”

Mount Pleasant-native Hunter Buczkowski joined the Chippewa family as well. He earned First Team honors from the Associated Press and Detroit News this past season.

“He’s a tough, hard-nosed player,” Bonamego said. “We feel like his toughness and his physical size makes him a great fit for our fullback position.”

The big get was Tony Poljan. The 6-7 quarterback from Lansing Catholic is the future of the position. He was selected as the No. 17-ranked recruit in Michigan. He threw and ran for 58 touchdowns in his high school career.

“He may be the most highly recruited player to sign at CMU in quite some time,” Bonamego said. “He had multiple offers from Power Five schools. He’s a tremendous athlete.”