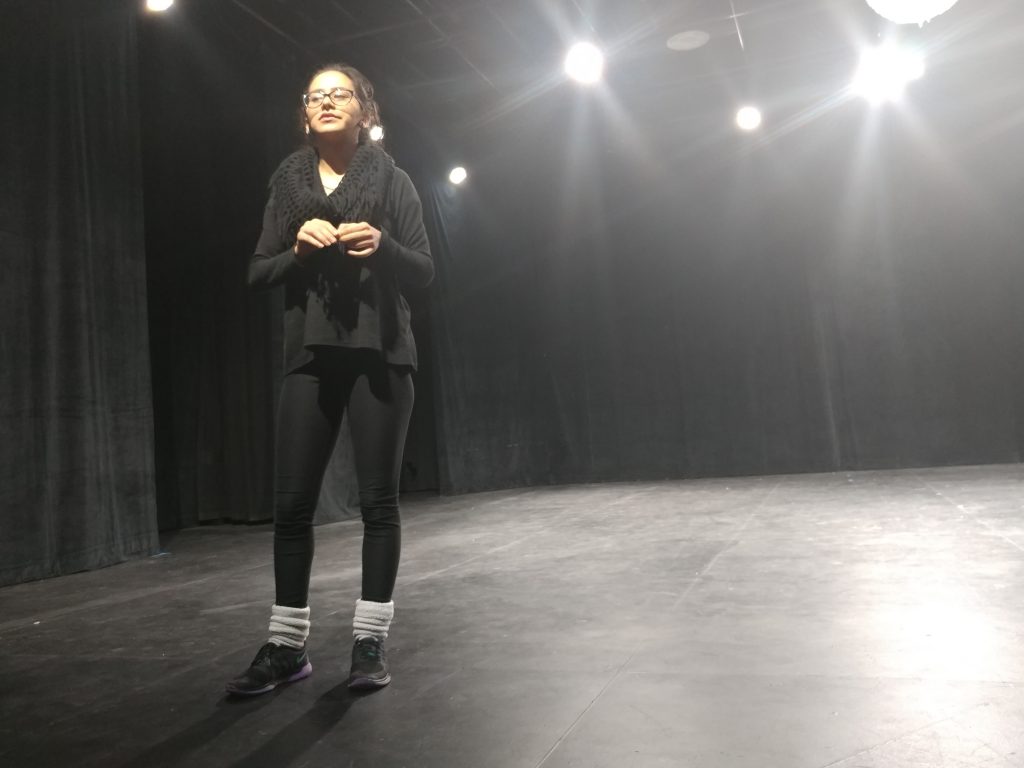 Story and Media by Xavier Mendoza

Fifth year senior Samantha Messina was able to fulfill her childhood dream with a show she completely choreographed called, “Resilient”.

“It’s pretty surreal. It’s something I’ve always wanted to do since I could remember, since I’ve been in competitive dance,” Messina said. “It’s pretty crazy that I haven’t even graduated college yet and I already have this opportunity.”

She started planning her show last semester. Messina had to turn in an application to be able to direct the show and the application needed the whole plan of her show. The application process took approximately two months.

After her approval, she started planning and preparing for the show starting last semester and even during the summer.

The cups are formed together to feature eight light balls; seven smaller ones and a large light ball that hangs from the ceiling throughout the whole show. The cups are held together with staples, the lights in them, and a compass for a supporting structure. It took her seven weeks to finish creating them.

“7 total with life stuff, homework etc. I had rehearsals 24 hours a week,” she said.

The concept of the light balls tied in to Messina’s theme for her show. The show’s theme is about overcoming struggles. To her, the cups represented something ominous, scary, and vague that was turned into something bright and happy.

“It’s hard at first but then you get towards the end and you look back and think, ‘Wow  learned a lot off that.’ It was worth it,” Messina said. “The theme is something everyone can relate to and it’s relevant to me right now, which is how it came out so easily.”

During her preparation stage, Messina experimented with different adhesives, materials and aesthetics. She said that her early preparation was helpful in the long run.

“A lot of different things I had to think about going into this,” she said. “I’m happy I started thinking about it early because it definitely took a lot of stress off me later on because there’s so much that has to happen when making a show.”

Although the program provided important things like the soundbox, audience chairs, curtains, and stage lights, Messina still had expenditures she dealt with.

“I paid for everything out of pocket. I get reimbursed for $200 but I spent a lot more than that,” she said. “I had to spend money on supplies and also things in the theater that had to be done, that I didn’t know about, so I had to front that up as well. Overall, I didn’t break the bank completely, so that’s always a plus.”

She paid for some of the dancers’ costumes, decorations, extra lights and accessories that the dancers may need like command hooks for costume changes.

As the new semester started, Messina held auditions for her show shortly after. With the help of her stage manager and recent CMU graduate, Katie Hunter, and faculty adviser, Heather Trommer-Beardslee, they held auditions in the beginning of September.

“After auditions we had a talk on what would be good for the show,” she said. “Who do we want, who can make this idea come to life. Who can tell this story.”

“Resilient” presents eight pieces and a finale that Messina choreographed. She said the dancers had a short amount of time to learn the complete pieces.

“We had 6 weeks for two dances, and 5 weeks with the rest of them. Which is insane that we finished and got it to having it look this good,” she said. “I am so overwhelmingly happy with how it turned out.”

With opening night approaching, like most events, not everything turns out exactly as expected. She had problems with the lights she installed into the center piece light ball.

“I actually had an LED strip fed through the whole thing. Three days before we had to hang it up it actually stopped working. I freaked out and went to plan B and just bought a bunch of Christmas lights,” she said. “I said, ‘Screw it,’ because I wanted it to be right instead of messing with technology. Christmas lights you just plug in. The other ones that broke were connected with bluetooth to control it.”

Besides some problems Messina, her stage staff, and the dancers practiced from at night, starting Sunday. She said that the dancers rehearsed from 5 p.m. until 11 p.m. and sometimes midnight.

“I am really happy how it turned out. I’m ecstatic,” she said. “Let’s just say I cried the first time I saw it at dress rehearsal, if that says anything.”

Messina said she was happy with how opening night went with the performances and time frame meeting her expectations.

“It was just right. I didn’t want it to be longer than 45 minutes or shorter than 30 and its about 35 minutes, so its perfect,” she said. “With the dances, everything fell into place. There are some pieces I didn’t mean to connect back to my theme that did.”

Messina said she’s excited for the next performances.

“I am so excited for the next few nights. There’s kind of a saying which I think is known for performers,” she said. “‘Opening night is always the stickiest night. Friday is the best night. Saturday, they’re just tired so it goes back. It starts great, second night is amazing, then we go back to great.’ I mean, the dancers have worked so hard for this show. Then, after our Saturday show, we have to take everything down before we leave and go celebrate. A lot goes into it.”

“Resilient” opened Thursday, at 7 p.m. in Moore Hall’s Theater-on-the-side and is free to attend. It was also shown yesterday and there will be a last showing tonight.