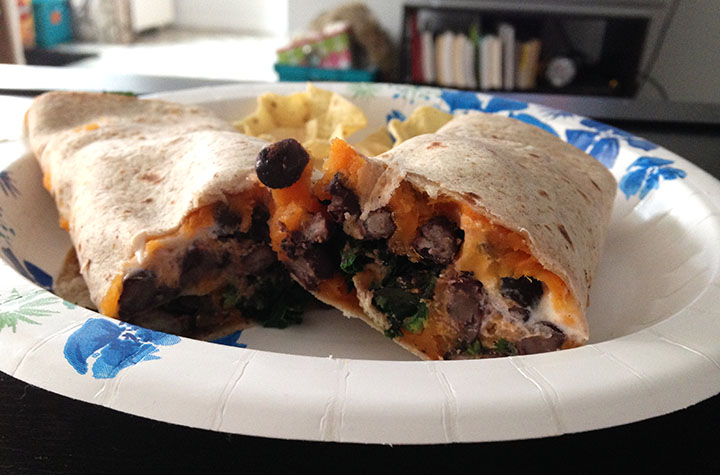 When I lived in Madison, Wis. I would go visit my cousin in Milwaukee. It was always lovely to see her, but I would start salivating when I thought about the place where we would go eat. Beans and Barley is half grocery store, half restaurant in downtown Milwaukee. The menu has so many options along with vintage Cokes and a lot of “diner” type food. But I stopped even looking at the menu after falling in love with one of the items. Well, sometimes I would take a quick peek just to make sure it was still being served.

Black bean, sweet potato burrito. Stuffing potatoes into a wrap might sound like a silly idea, but it is definitely one of the best things I’ve ever ate. Since I am now back in Michigan, I had to find a way to make my own. And let me tell you, it was simple. I don’t know exact measurements because everything I ever cook is always eyeballed. This version is also a little bit healthier, which is always a bonus.

Spread all of the ingredients in the burrito wrap and roll it up! Put it in the oven to make it all melt together. Pair with corn tortilla chips to pick up the filling that falls out while you’re eating. And if you ever have a chance to have the real thing, go to Beans and Barley in Milwaukee and stuff your face. You won’t be disappointed.